Quiz: How Much Do You Know About America When It Comes to Money? 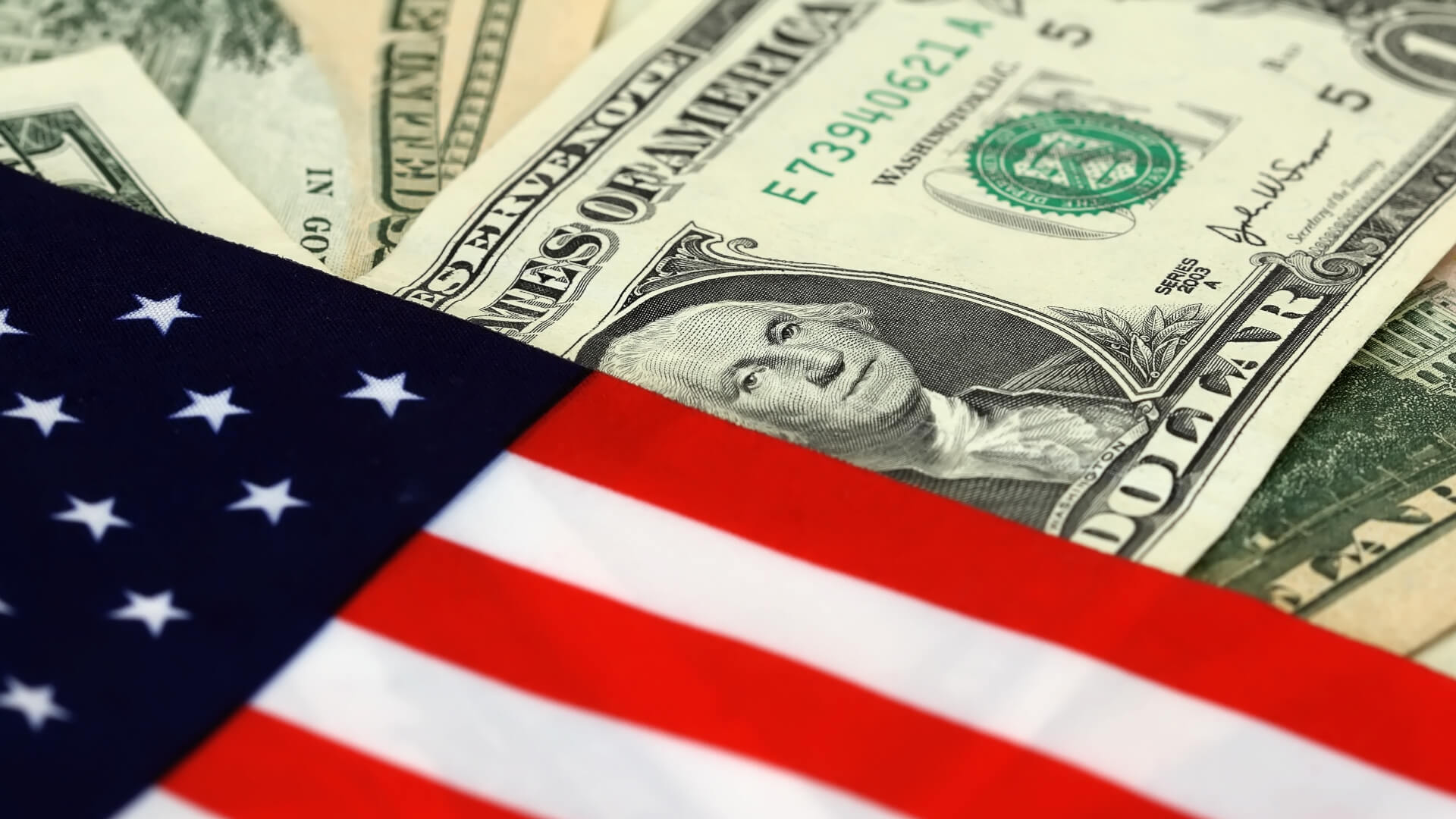 Americans’ spending habits and expenses vary widely from coast to coast. From how much it costs to buy a house to how much states spend on expenses such as education, where you live can make a big difference.

GOBankingRates has conducted several studies about personal finance and economics in America. Take the quiz to find out if you know enough about finances in America. 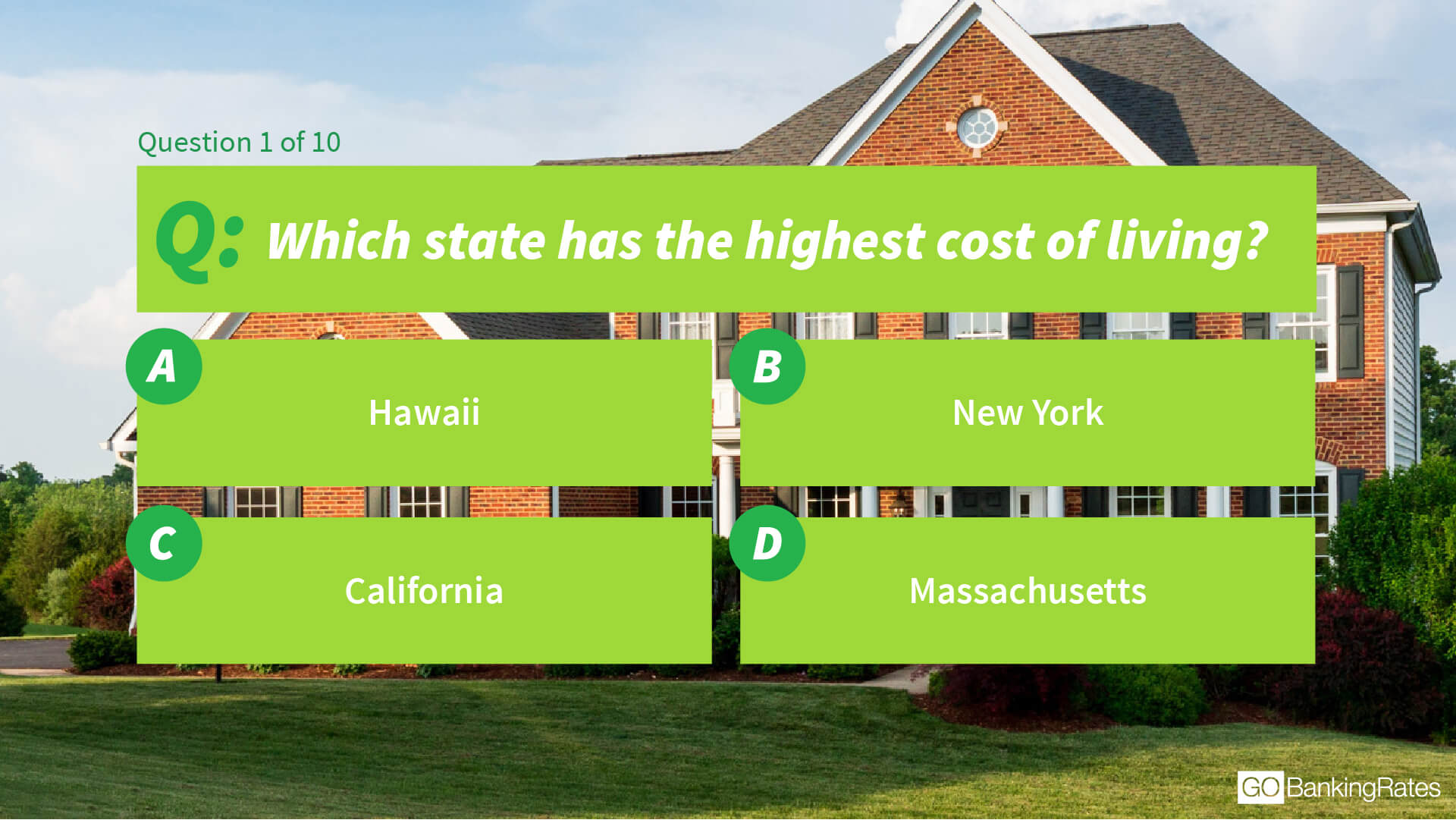 1. Which state has the highest cost of living?

Think you know where it costs the most to live? Click to find out if you’re correct. 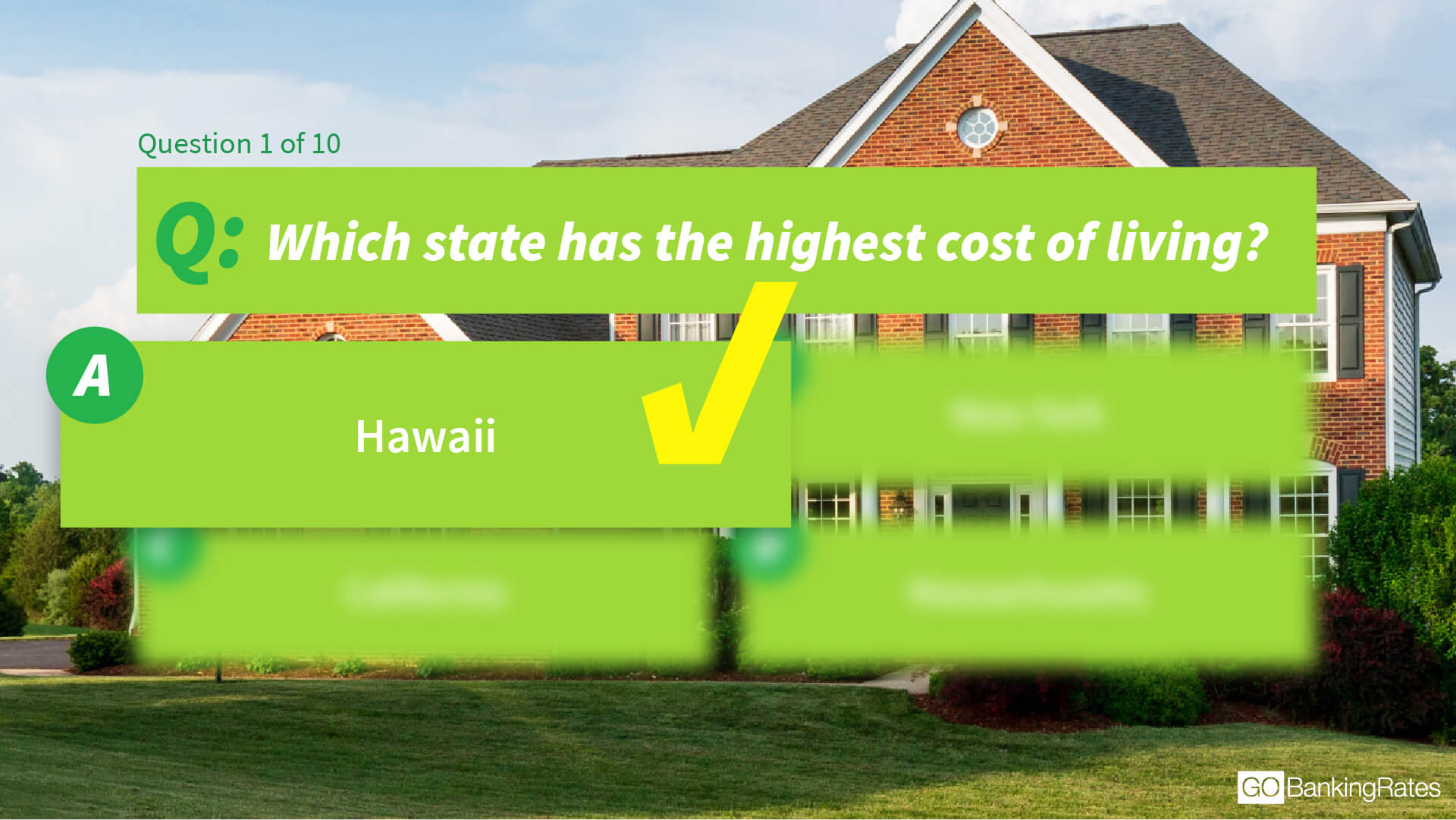 Hawaii’s average cost of living is over 67 percent more expensive than the national average, according to the results of a GOBankingRates study. Washington, D.C., comes in second, followed by New York, California and Massachusetts to round out the top five.

On the other end of the spectrum, you can stretch your dollars further in Mississippi, Indiana, Michigan, Arkansas and Oklahoma. 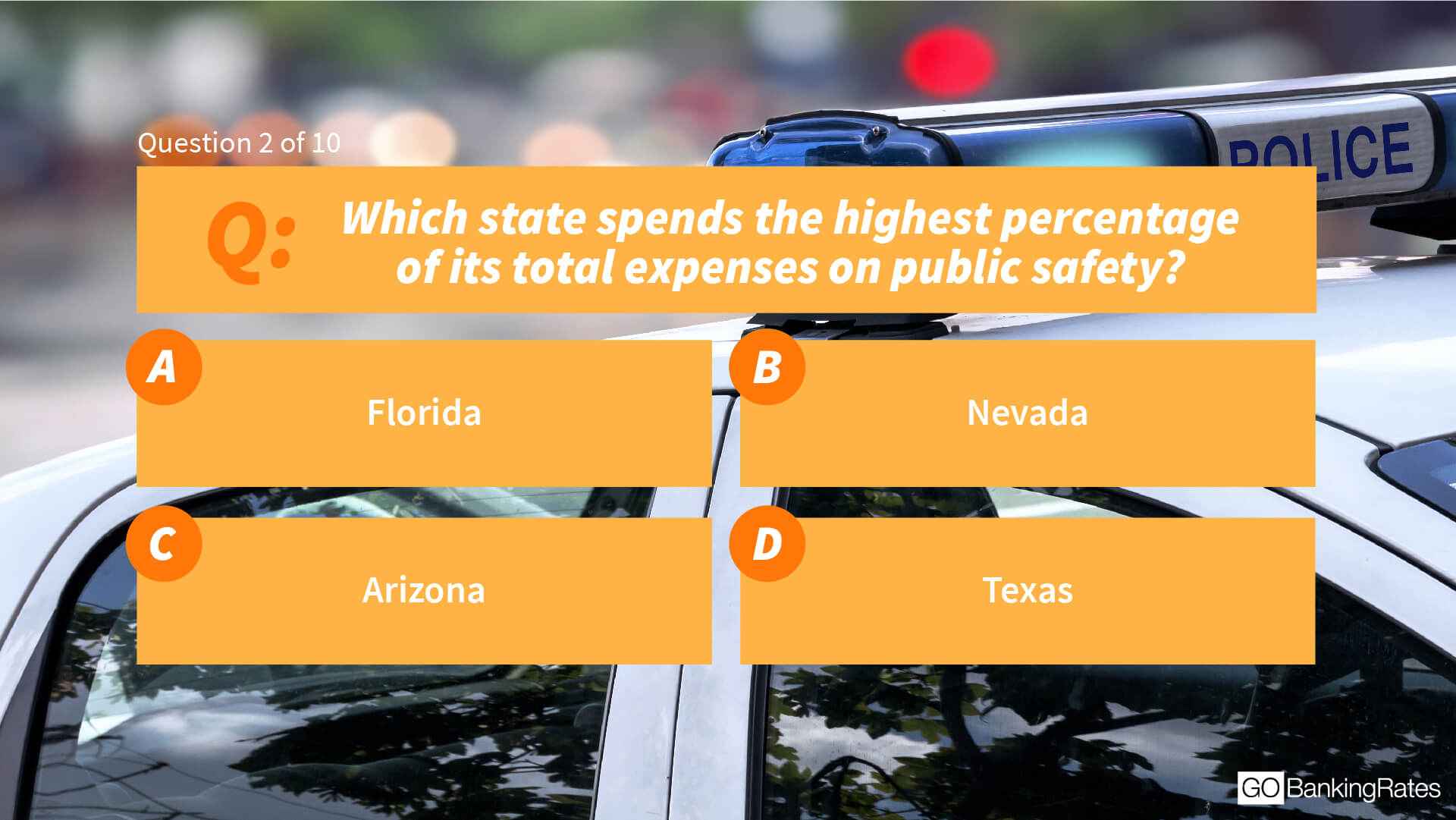 2. Which state spends the highest percentage of its total expenses on public safety?

“Public safety” expenses include protective inspection and regulation services. Will that change your answer? Click through to see if you’re right. 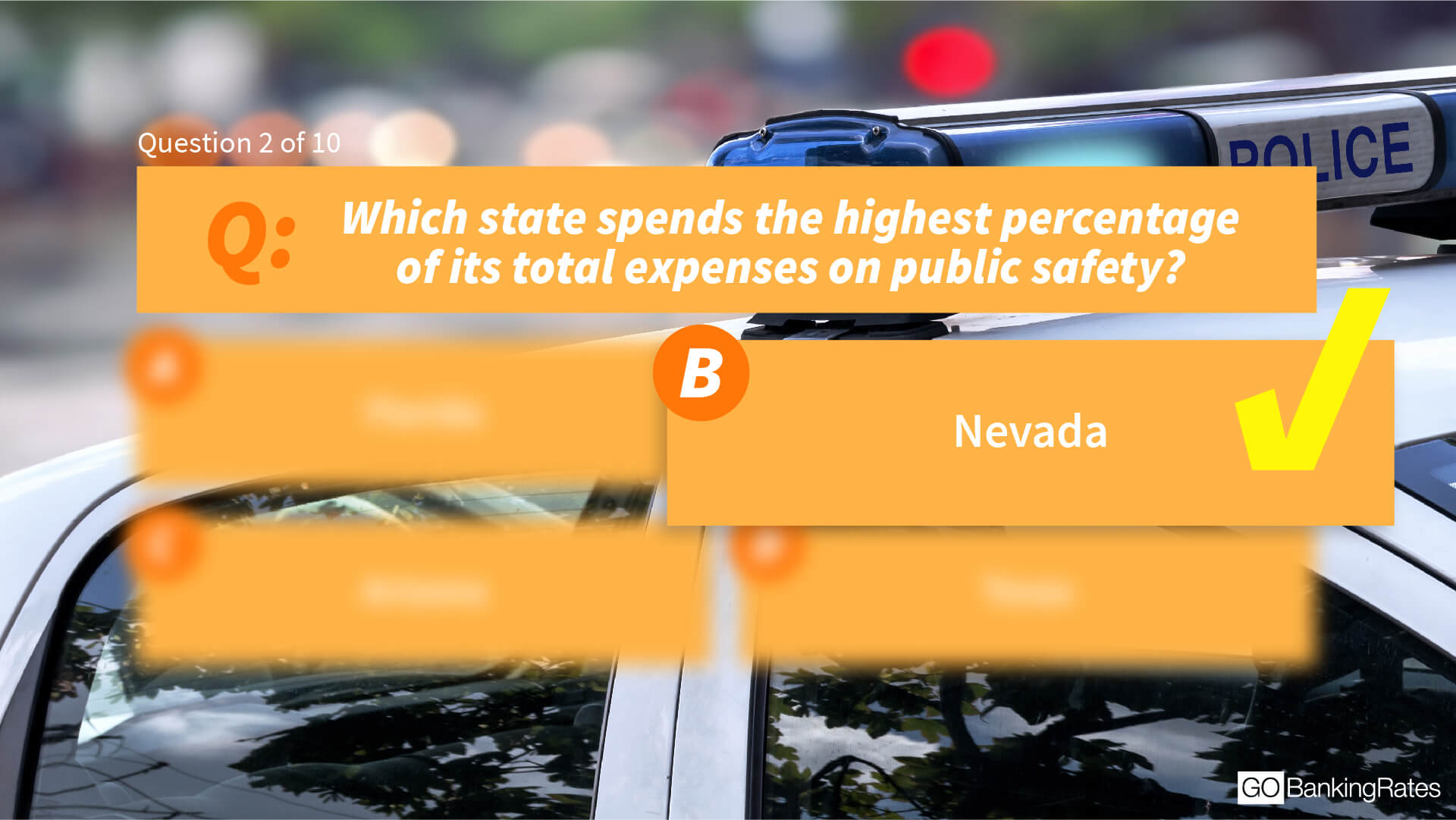 According to a GOBankingRates analysis, Nevada is the only state that allocates more than 10 percent of its annual expenditures to public safety.

If you picked Florida, you aren’t far off, as the state spends 9.76 percent. North Dakota spends the lowest percentage, at just 4.25. 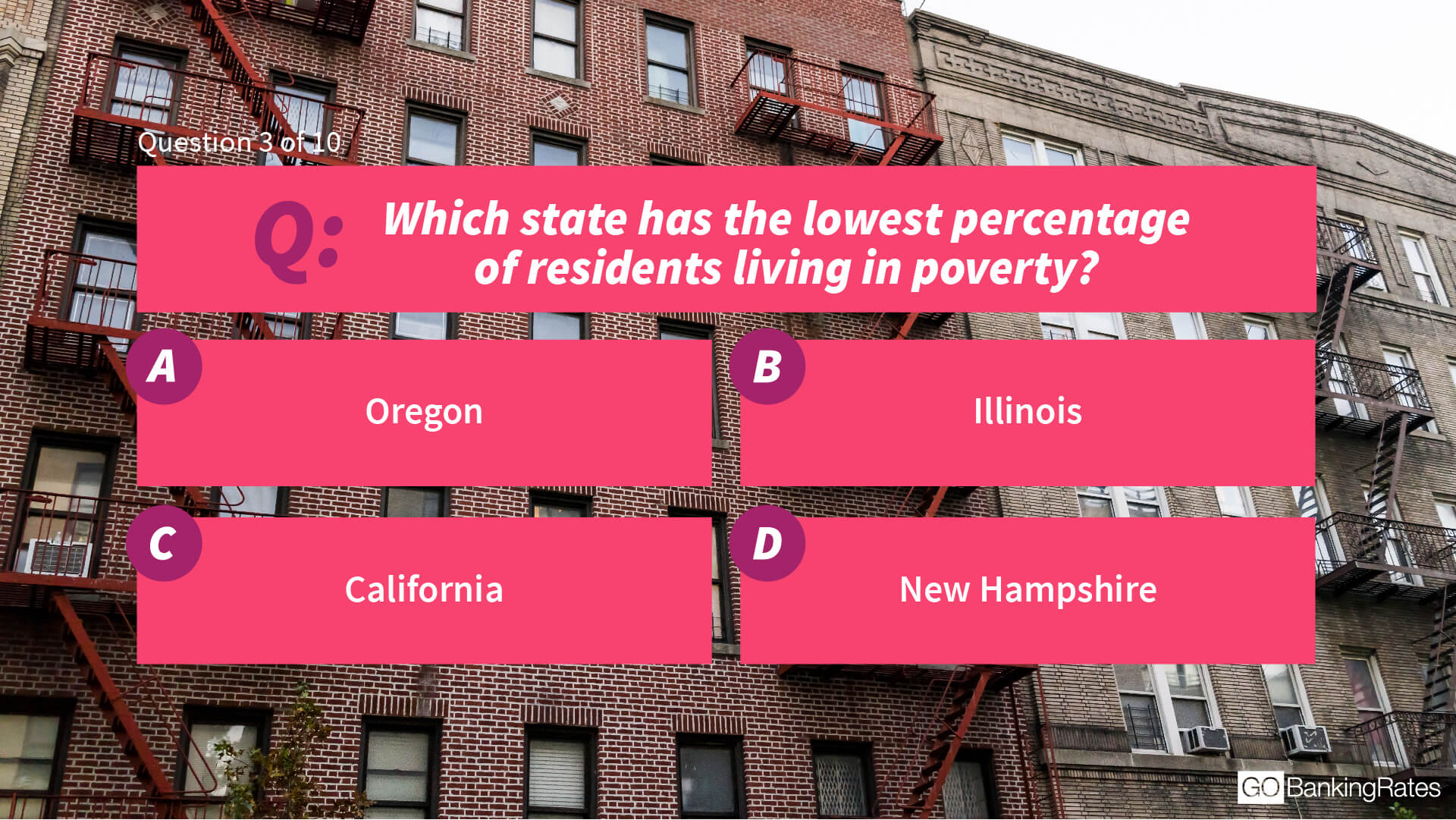 3. Which state has the lowest percentage of residents living in poverty?

Just because there’s a lot of money in a state doesn’t mean it’s distributed equally. Click forward to find out where the smallest percentage of the population lives below the poverty line. 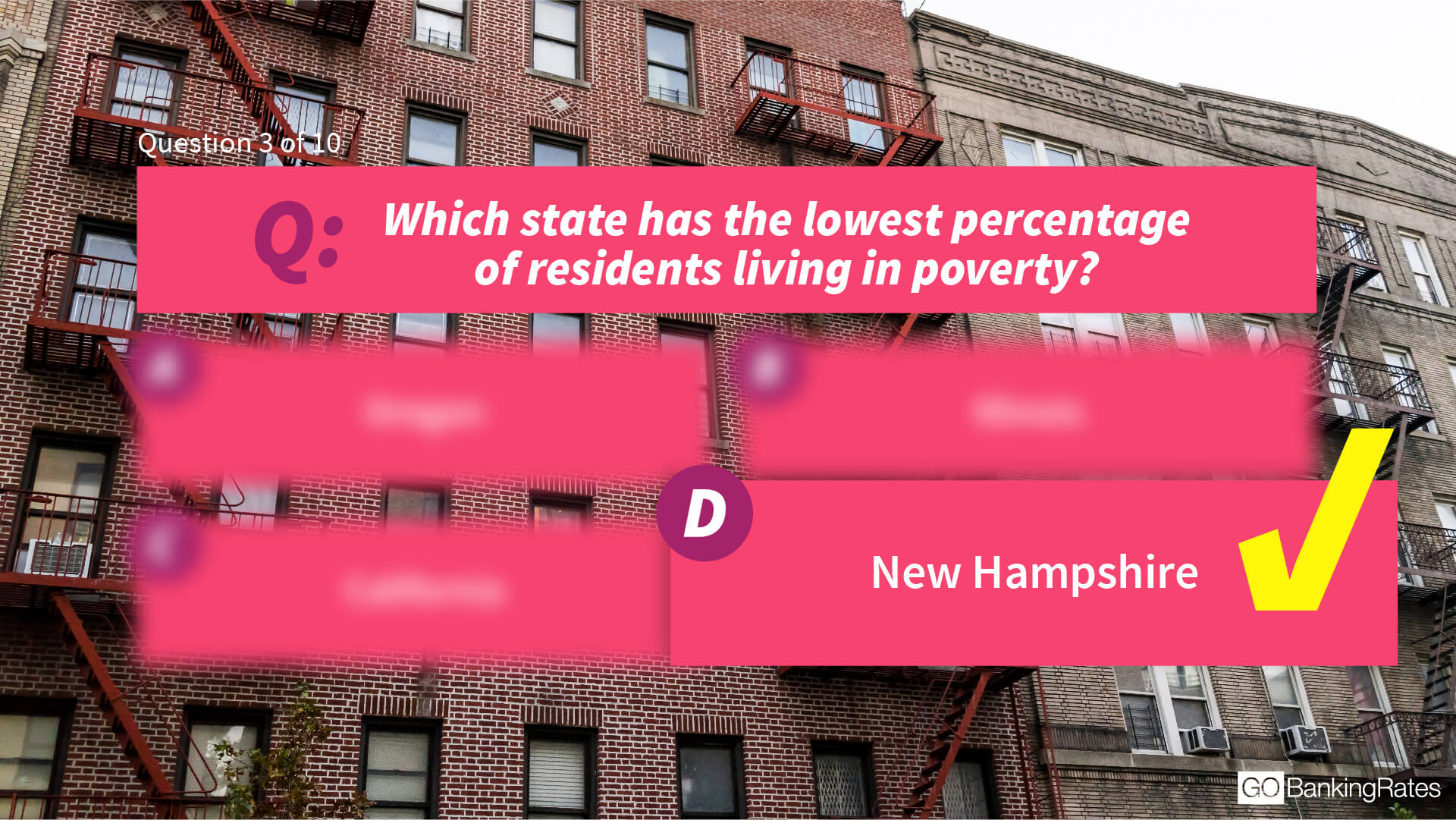 At just 6.8 percent, New Hampshire has the lowest percentage of its residents living in poverty. But because of other factors, such as GDP per-capita income, long-term liabilities per capita and state tax revenue per capita, North Dakota takes the top spot as the most fiscally successful state in this GOBankingRates study. 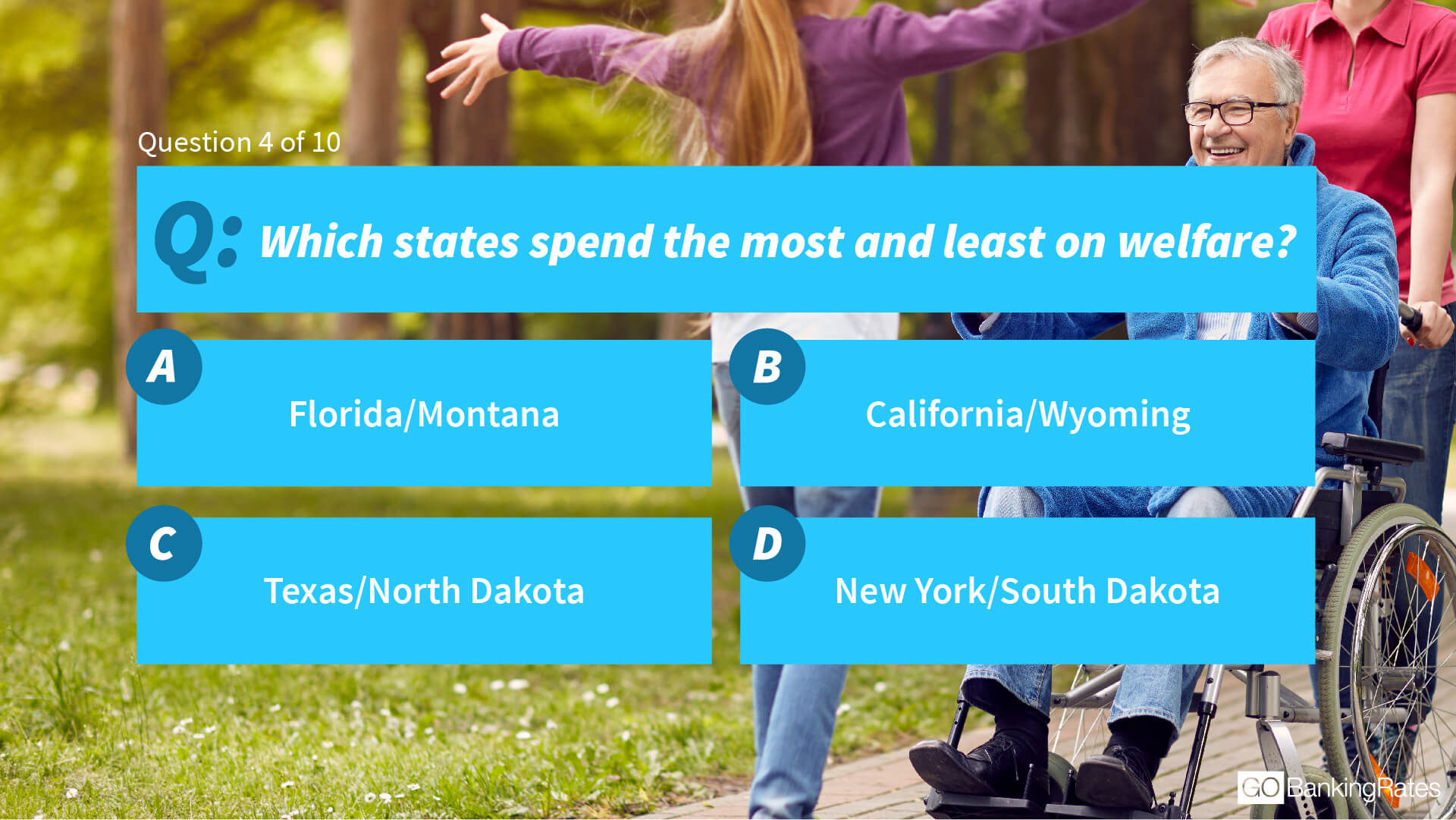 4. Which states spend the most and least on welfare?

The figures used in the GOBankingRates study on welfare spending by state are based on total spending, not per capita, so population matters. Click through to see if you get both correct. 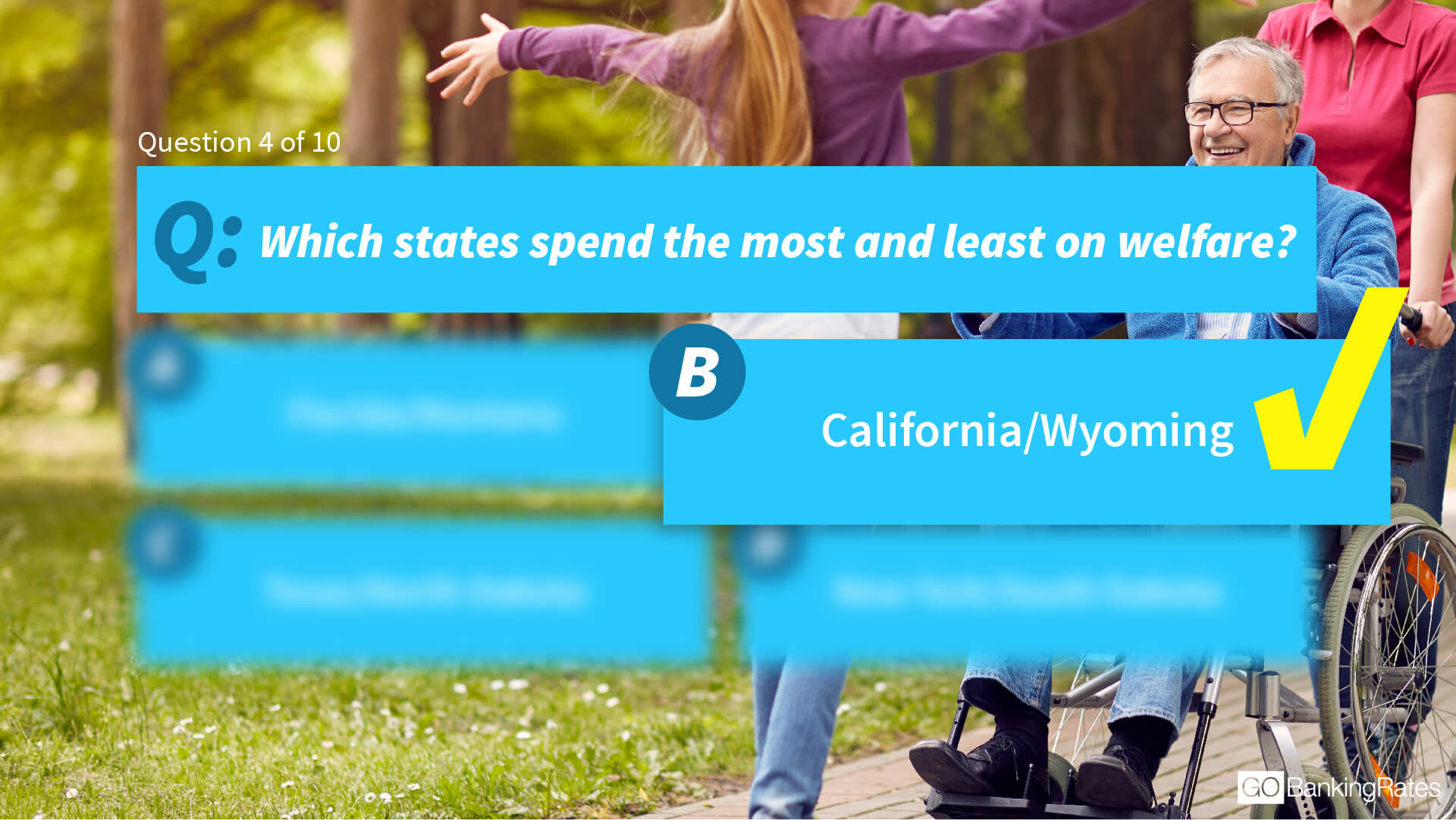 At almost $103 billion, California spends more than the next two biggest spenders, New York and Texas, combined. Wyoming is the only state that spends less than $1 billion on welfare, at $843 million each year. 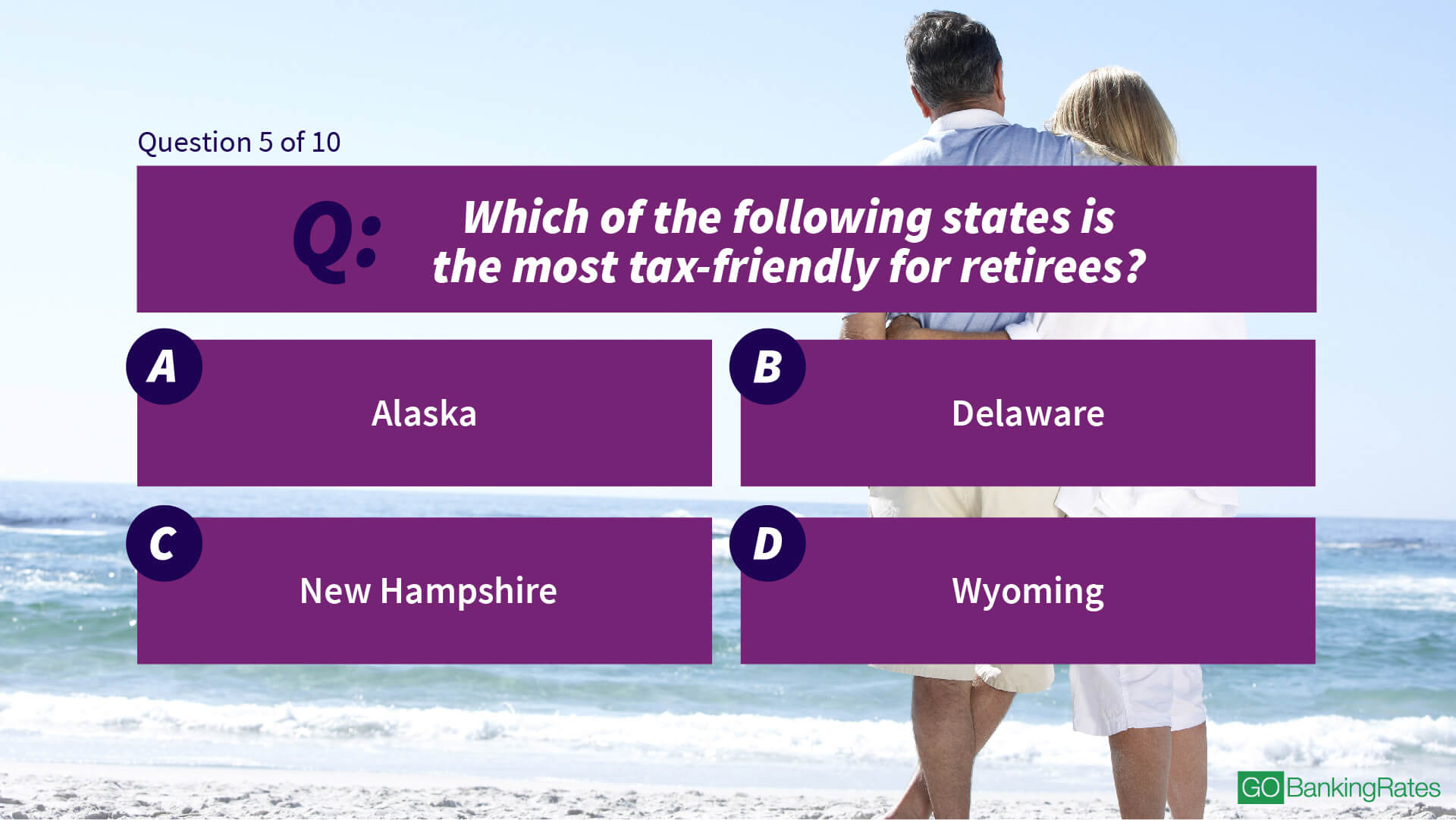 5. Which of the following states is the most tax-friendly for retirees?

Think you know which state taxes retirees the least? Click to see if you’re right. 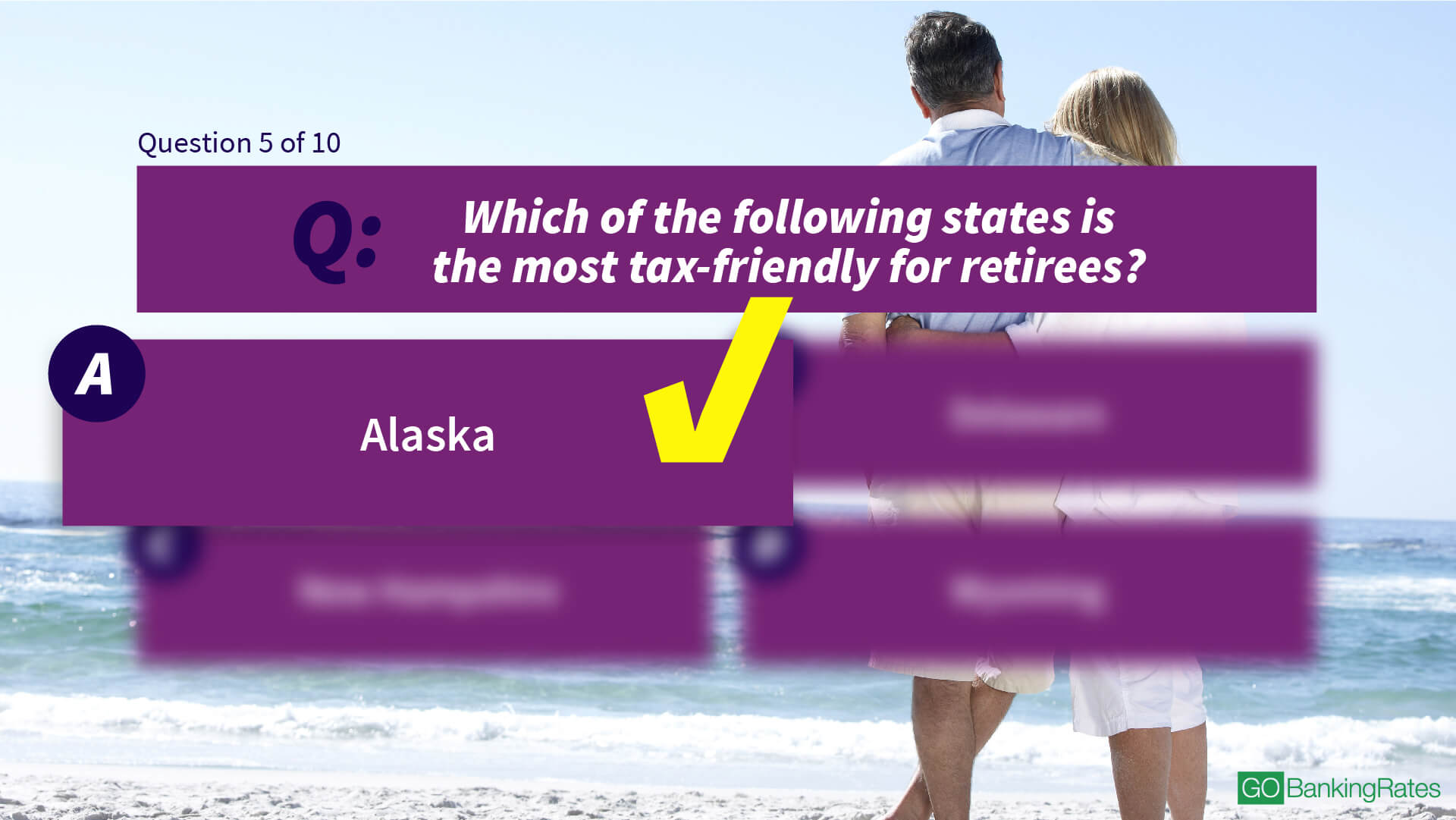 Alaska took the top spot in the study that identified the most and least tax-friendly states for retirees. The state has no income taxes at all, including on Social Security benefits. If you prefer to stay in the contiguous United States, Wyoming came in second. 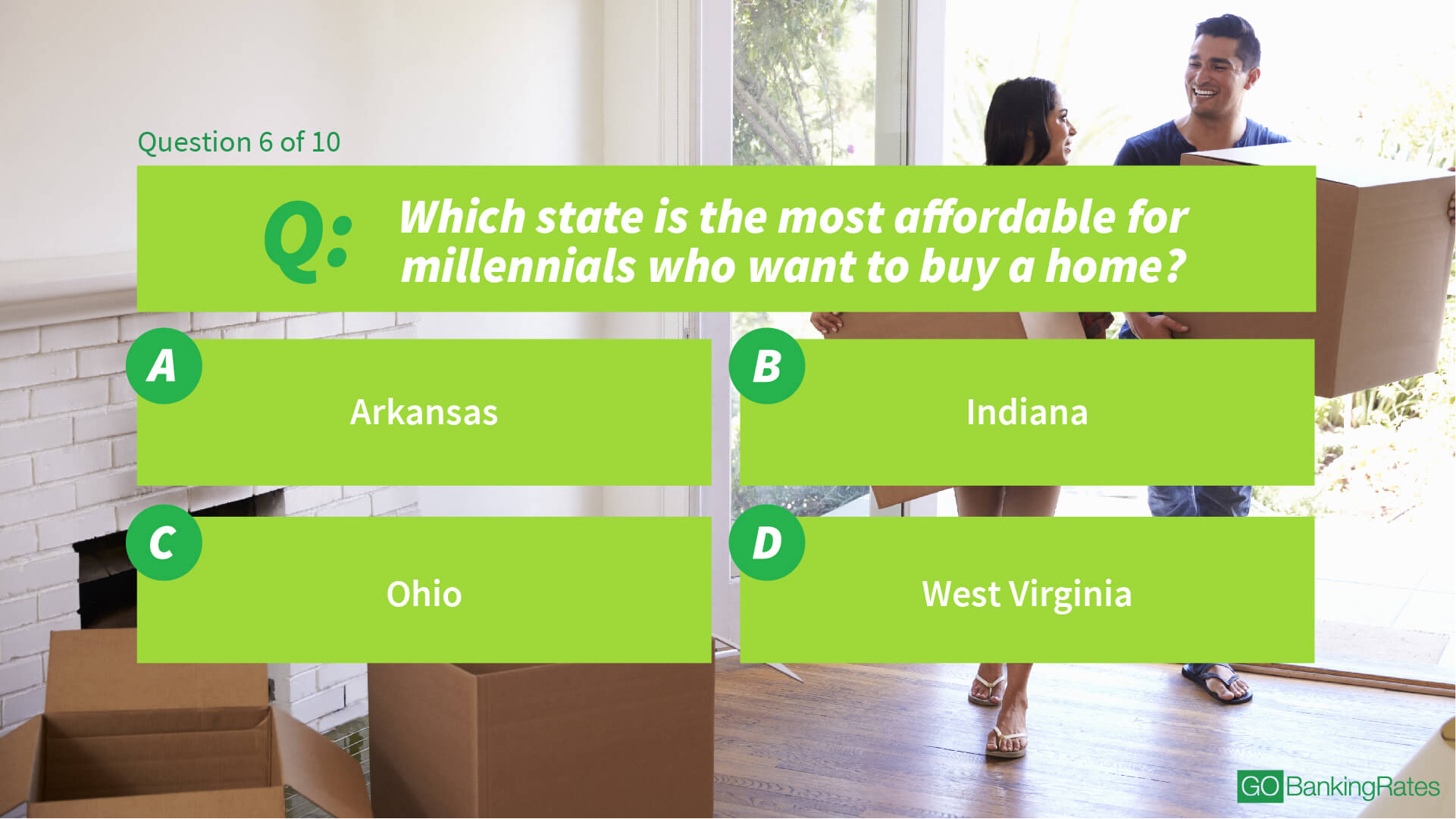 6. Which state is the most affordable for millennials who want to buy a home?

The GOBankingRates study considered how long it would take to save for a 20 percent down payment on a median-list-price home in each state and the size of the monthly mortgage payment. Click through to find out where it’s more affordable to become a homeowner. 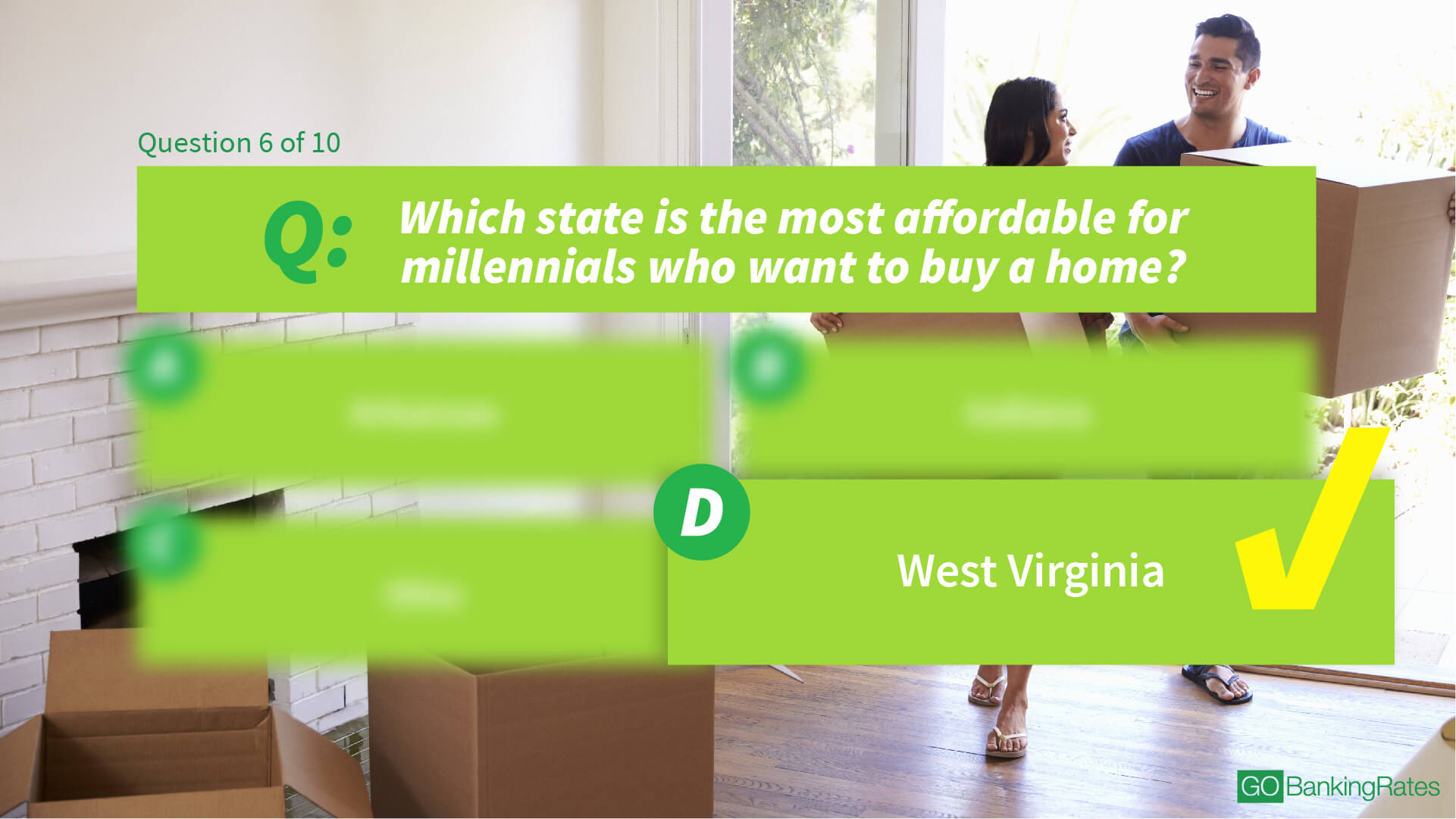 West Virginia came out on top in this study that identified the most and least affordable states for millennial homeowners. At the time the study was conducted, the median list price was just $159,000 and a monthly mortgage payment came out to $847. Based on the national median income, you could save for a 20 percent down payment in just 2½ years. 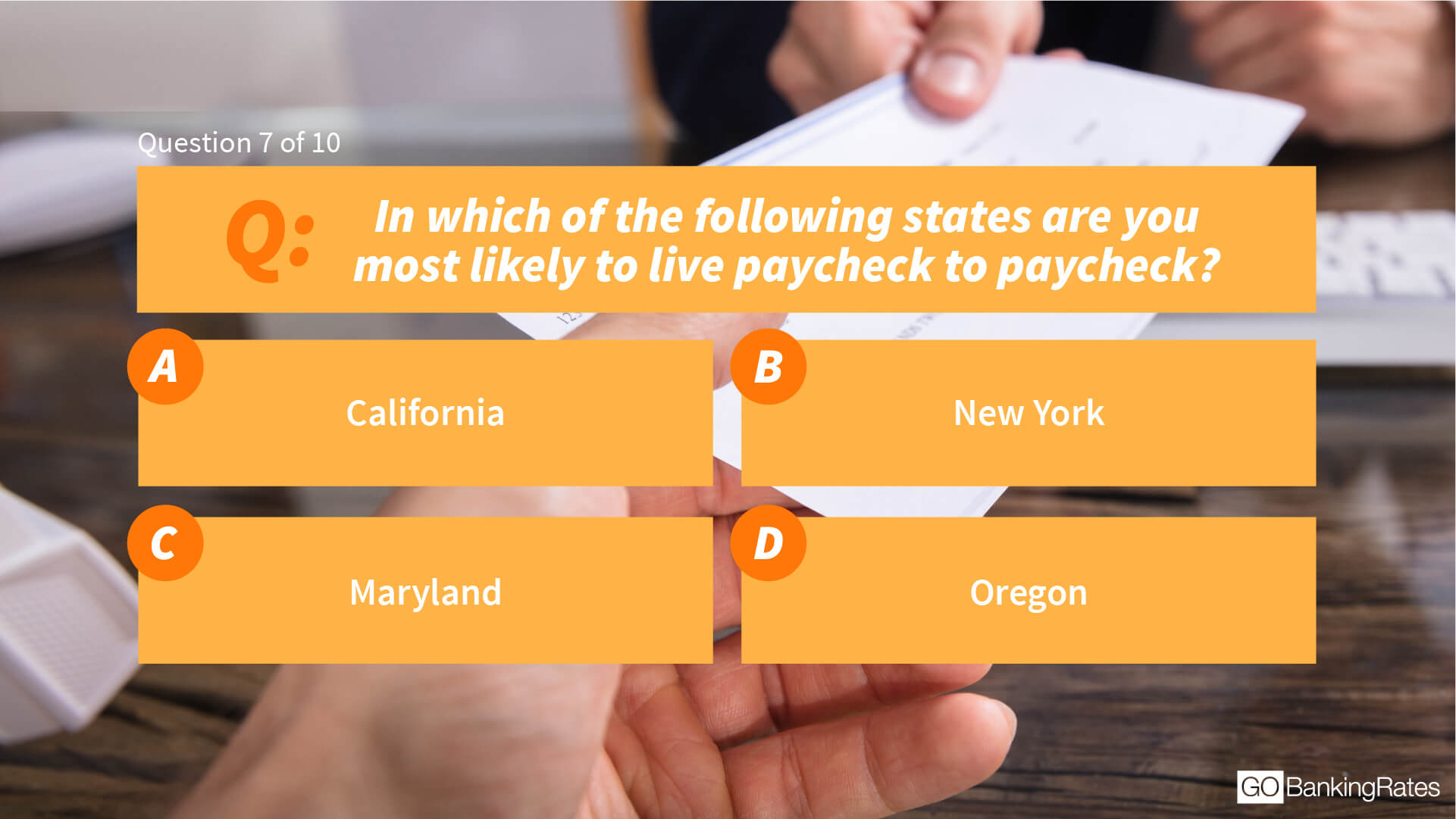 7. In which of the following states are you most likely to live paycheck to paycheck?

Think you know where you’ll have money left over from your paycheck after paying for the basics? Click through to find out. 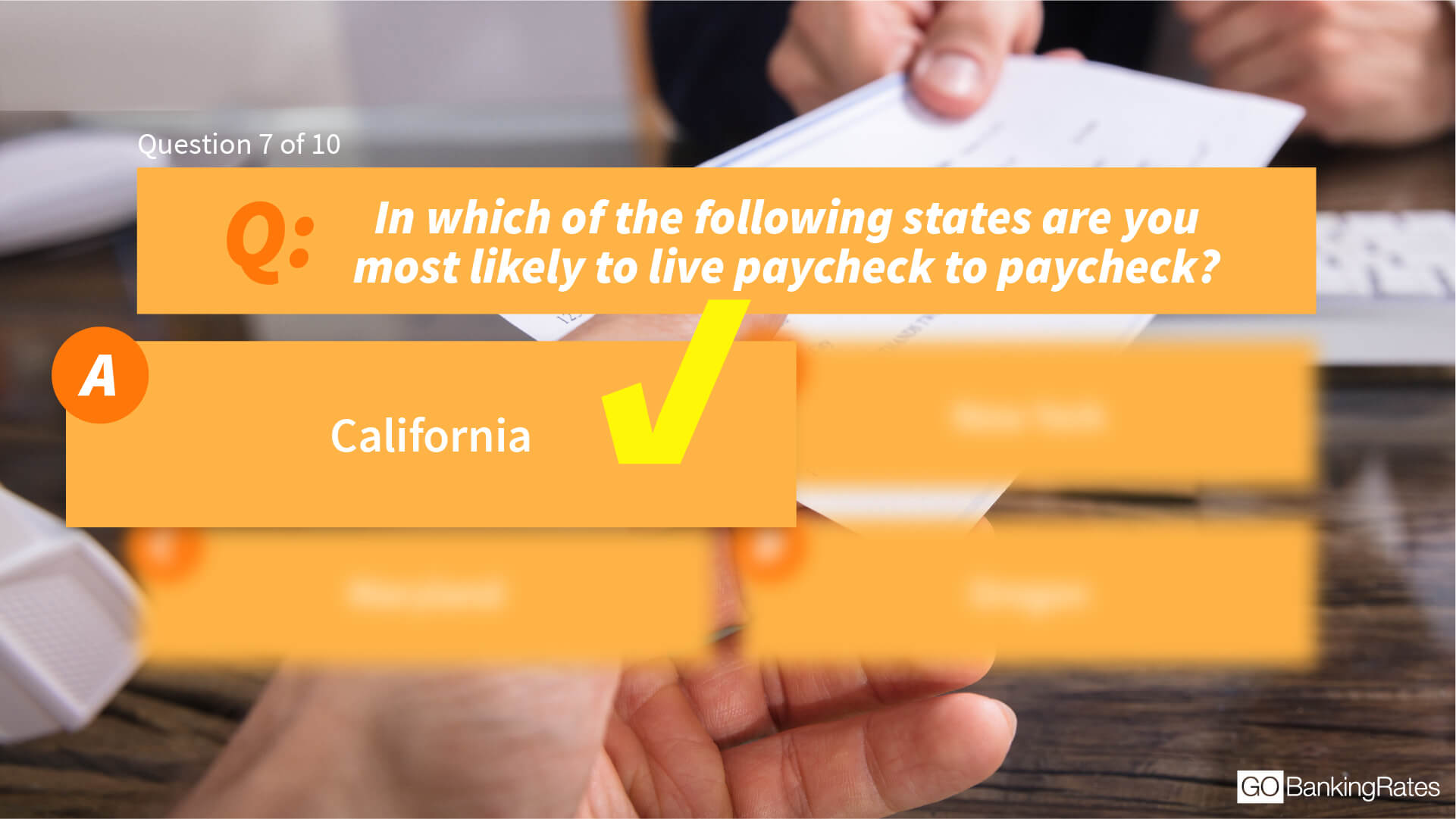 In the GOBankingRates study, Californians had one of the lowest percentage of income left over, 7.58 percent, after paying for living expenses. New Yorkers were next with only 14.45 percent left over. 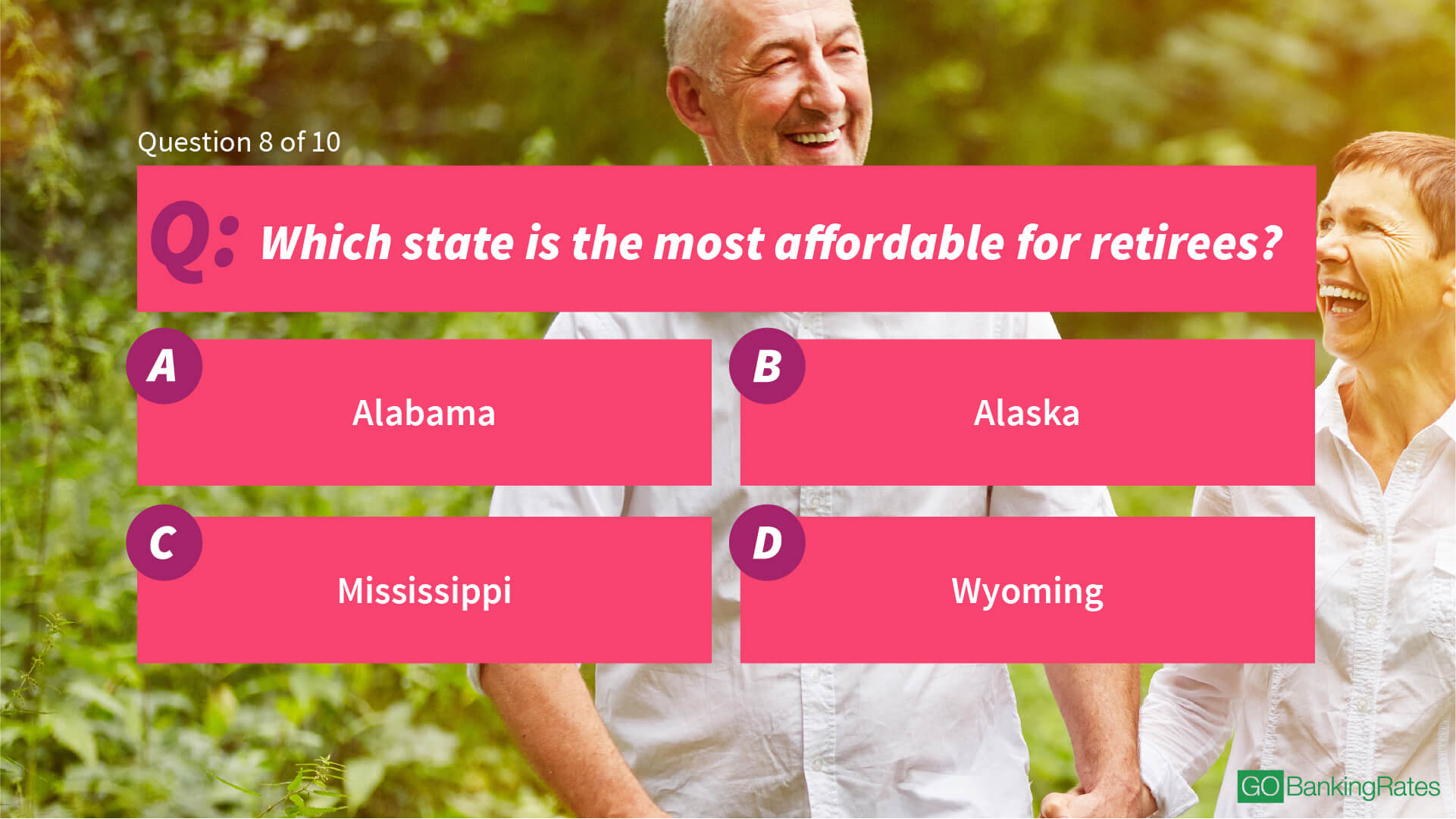 8. Which state is the most affordable for retirees?

Pick carefully — the wrong choice could mean your retirement budget won’t stretch as far or last as long. Click through to find out if you’re right. 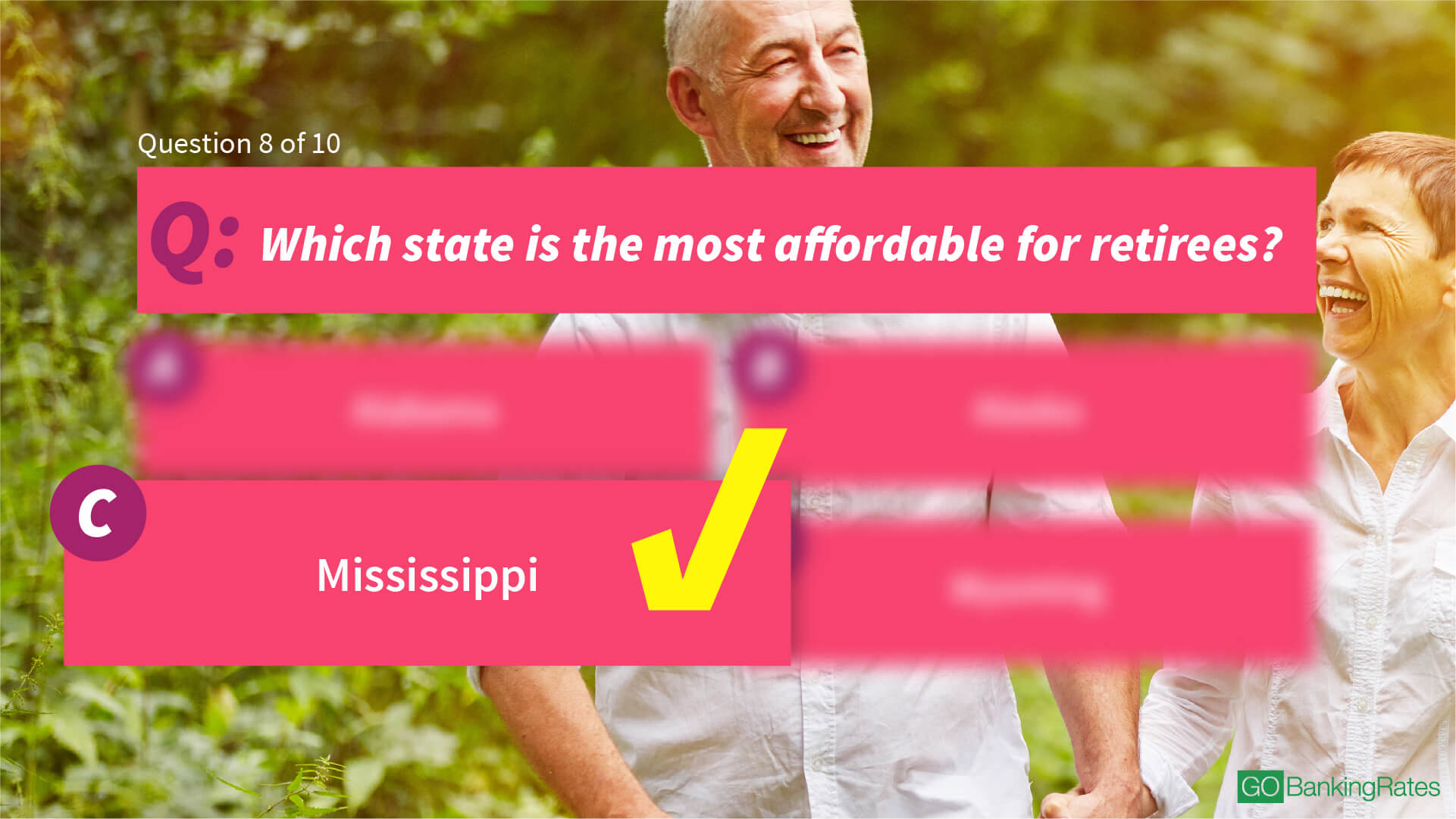 GOBankingRates found that moving to Mississippi will help stretch your nest egg as long as possible, as it takes only $37,750 a year to live comfortably in retirement. All states in the South have low costs, with Arkansas the second-lowest, Alabama the third-lowest and South Carolina the fifth-lowest. (Oklahoma was the fourth-lowest.)

If you thought a peaceful retirement in Alaska was cheap, think again: A comfortable retirement in that state will run you almost $62,000 a year. 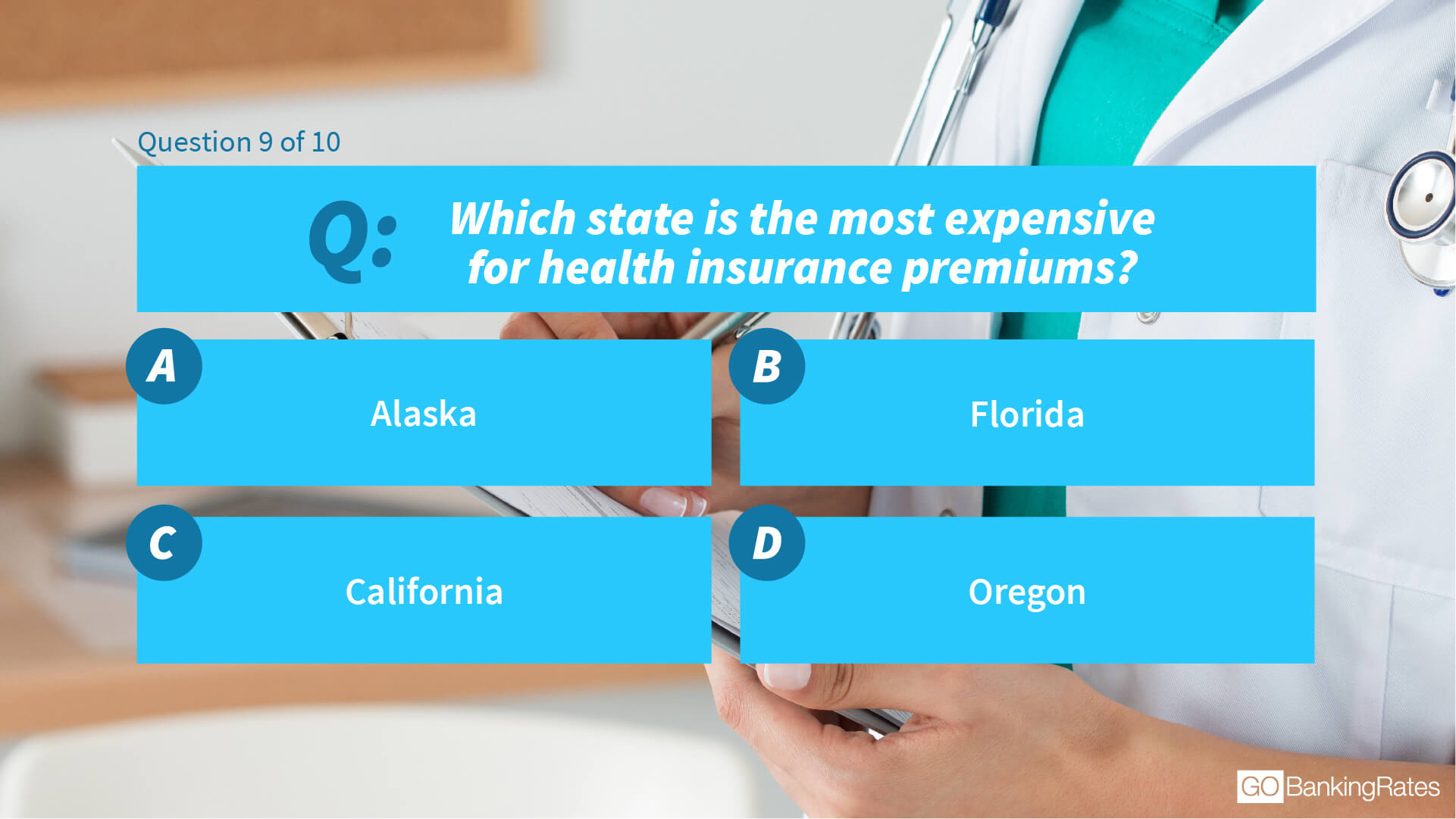 9. Which state is the most expensive for health insurance premiums? 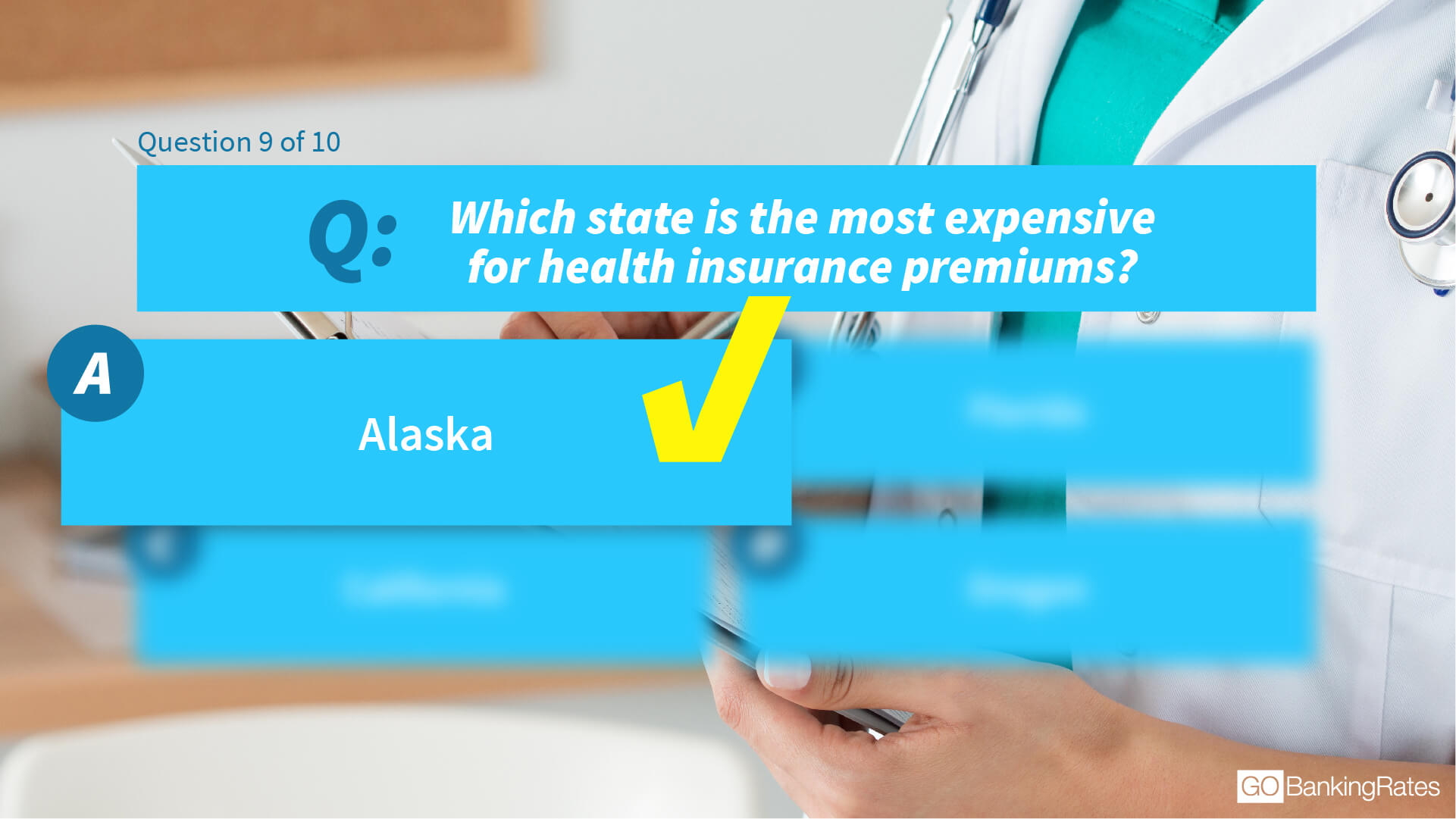 Alaska has the highest costs, with an average monthly premium of $780 and an average annual deductible of $3,750 for silver plans. Wyoming comes next, followed by Indiana. Florida has the seventh-highest costs and California the 22nd most expensive. Oregon actually has the eighth-lowest costs. 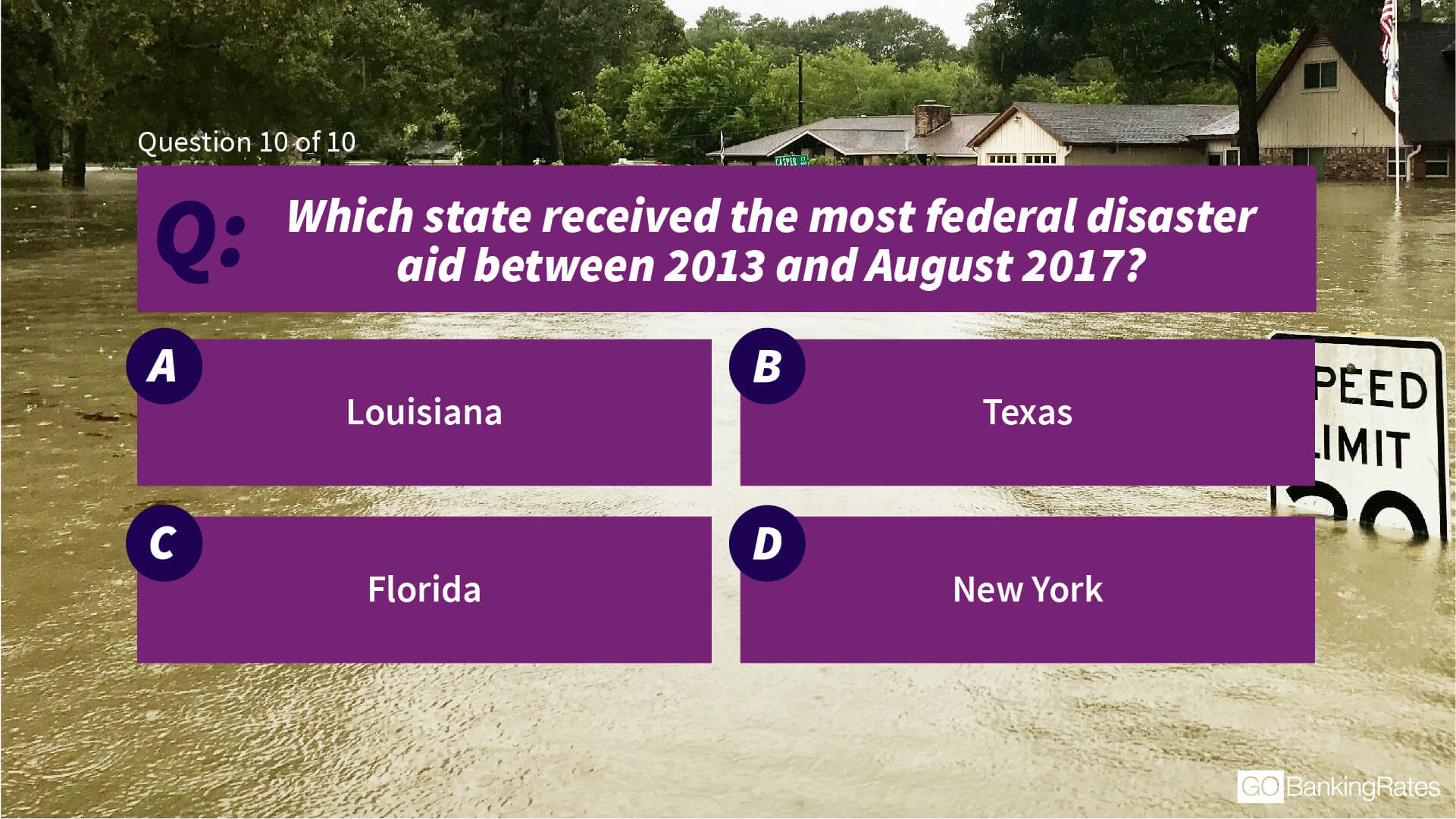 10. Which state received the most federal disaster aid between 2013 and August 2017?

Tropical hurricanes often get the most news coverage, but how does that correspond to receiving federal aid? Click forward to see if you know the right answer. 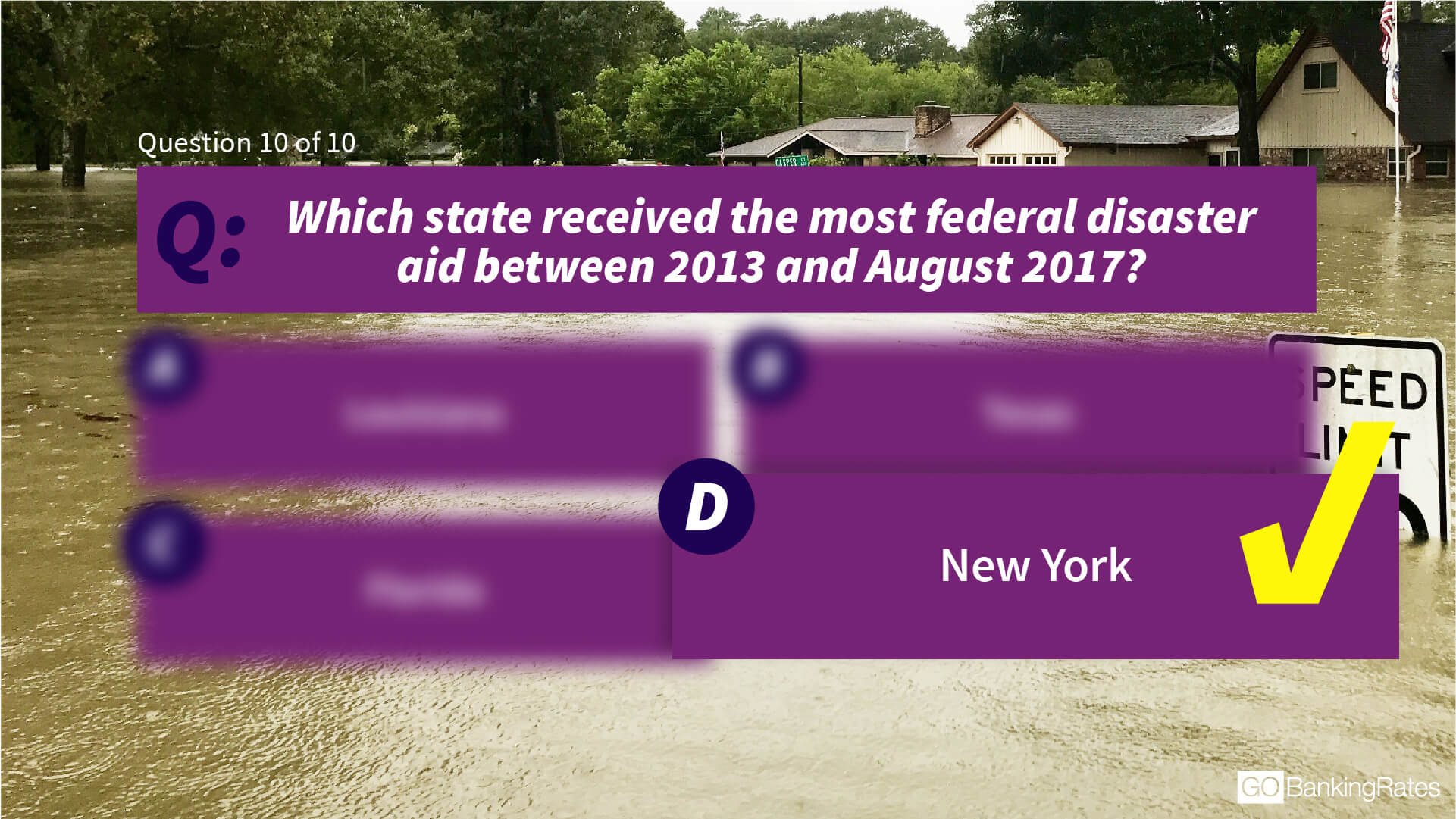 According to the study, New York received almost $18.3 billion in federal disaster aid. That’s almost three times as much as Louisiana, which received the second-highest amount in federal aid. New Jersey received the third most, at $3.55 billion.

No other state received more than $500 million. Texas was fifth at $434 million, but since 1953, Texas has had the most federally declared disasters with 93.

Click through to take this next quiz: Can you guess the biggest industry in your state?

Some facts and figures are accurate as of 2018.