25 Coolest Family Vacation Spots in the US 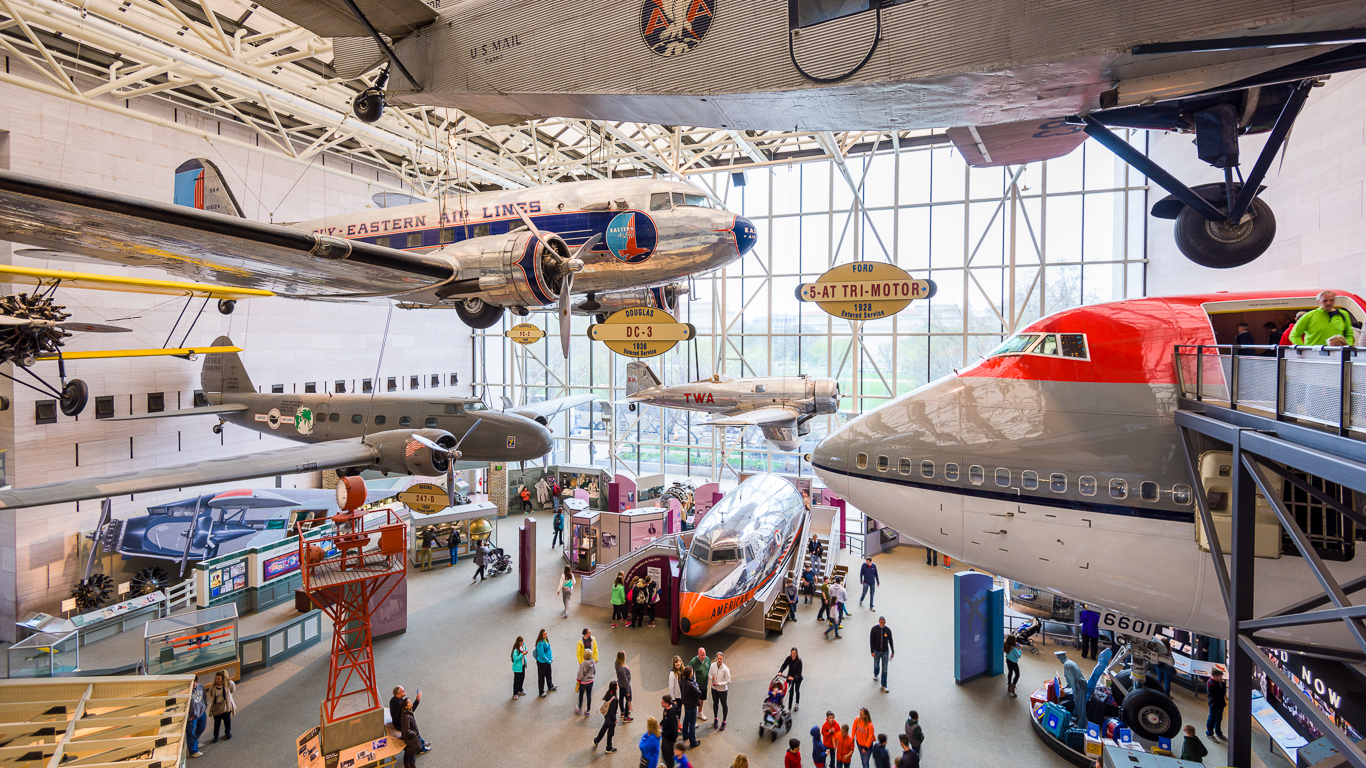 It’s easy to take the path of least resistance when traveling with kids and just head to the same spot year after year. But if you want to have the best family vacation, consider venturing throughout America to see more of what the country has to offer.

Click through to see the best places in the U.S. to visit with kids. 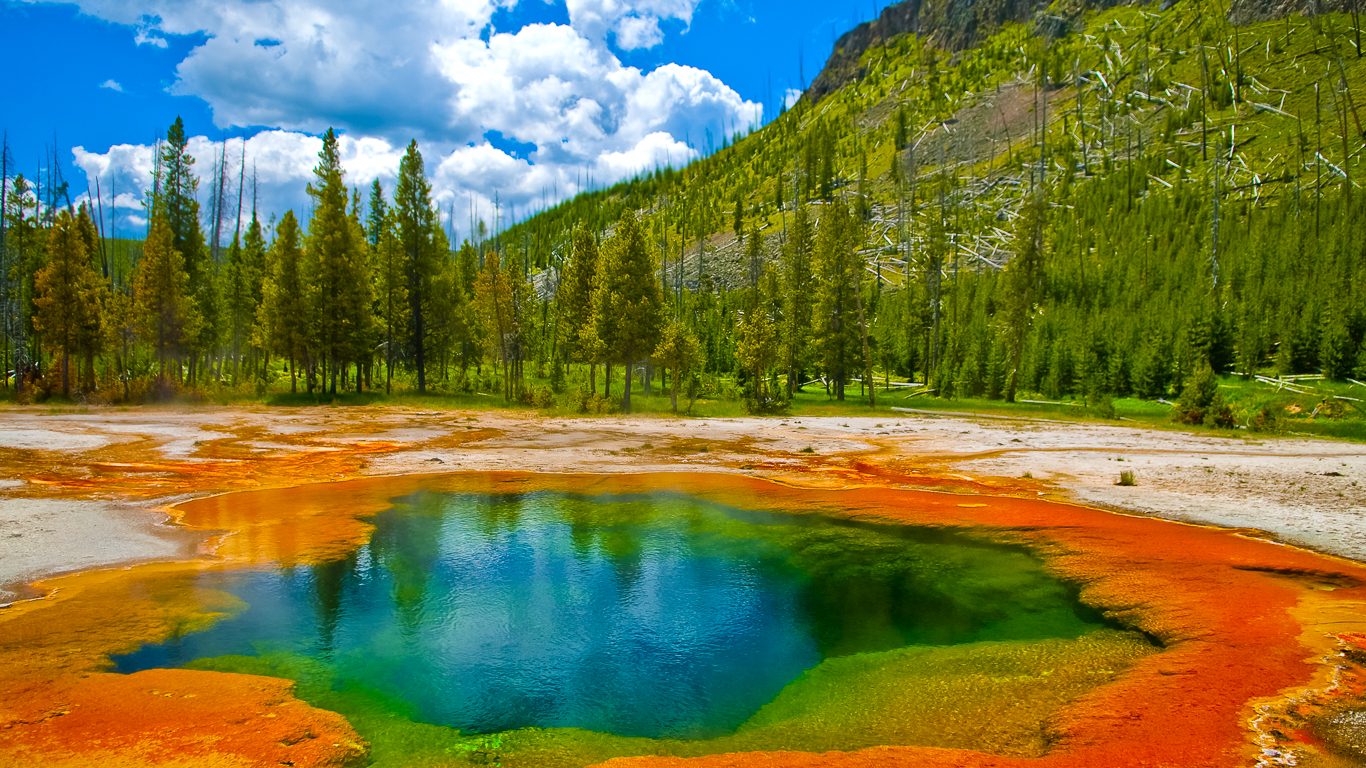 It’s hard not to be impressed by all of the incredible natural wonders the world’s first national park has to offer. Because an active volcano lies beneath Yellowstone National Park, the site has more than 10,000 hydrothermal features such as mud pots, hot springs and geysers — including the famous “Old Faithful.” Plus, there are nearly 300 waterfalls and an incredible array of wildlife — including elk, moose, bison and bears — in this 3,472-square-mile park that straddles Wyoming, Montana and Idaho.

Although there are some hidden expenses to watch out for when visiting, it costs only $35 for a seven-day vehicle pass. There are a few times during the year when entrance fees to all national parks are waived, however. And currently, all fourth graders can visit national parks for free as part of the Every Kid Outdoors program, making it a great family vacation idea. 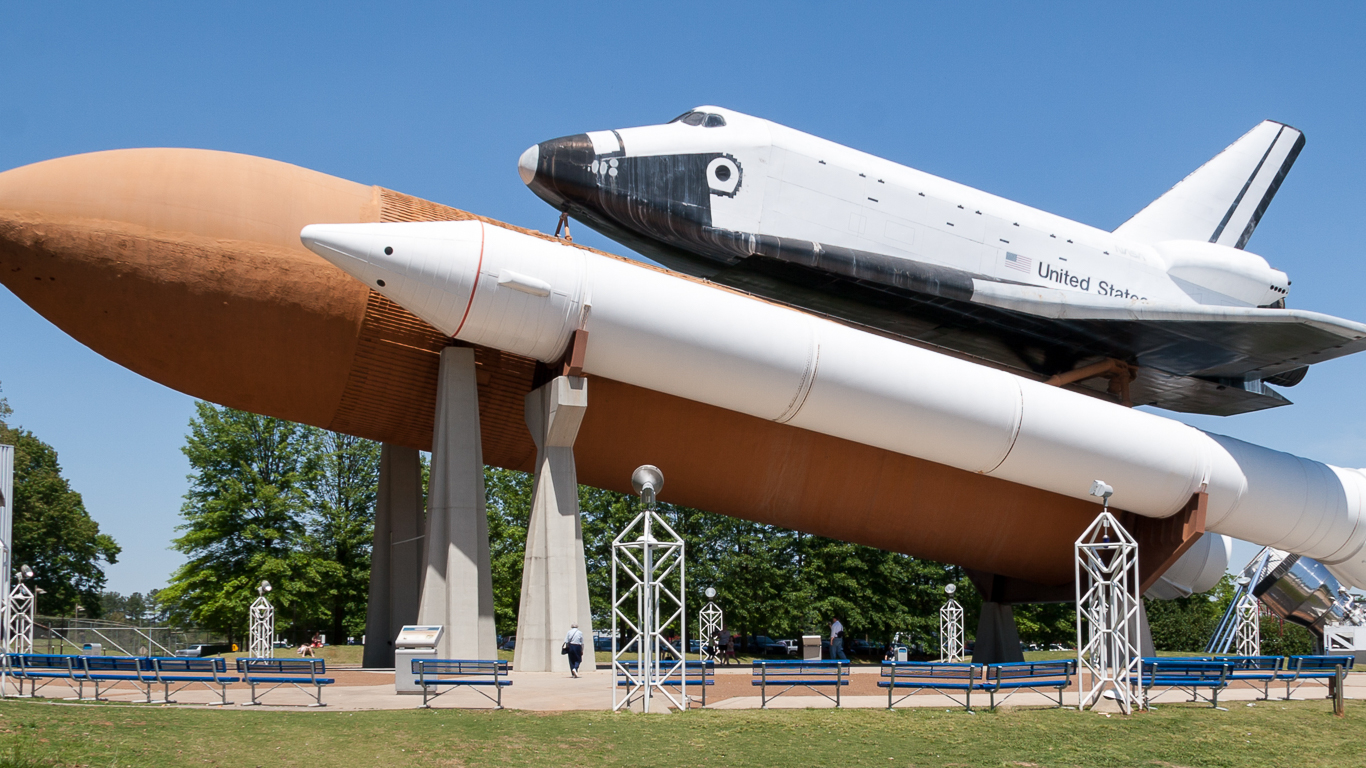 The U.S. Space & Rocket Center in Huntsville, Ala., is the largest spaceflight museum in the world and home to several science-related camps for kids, including Space Camp. But anyone can tour this center to see its collection of rockets and ride simulators that recreate the feeling of a rocket launch (there are height restrictions). 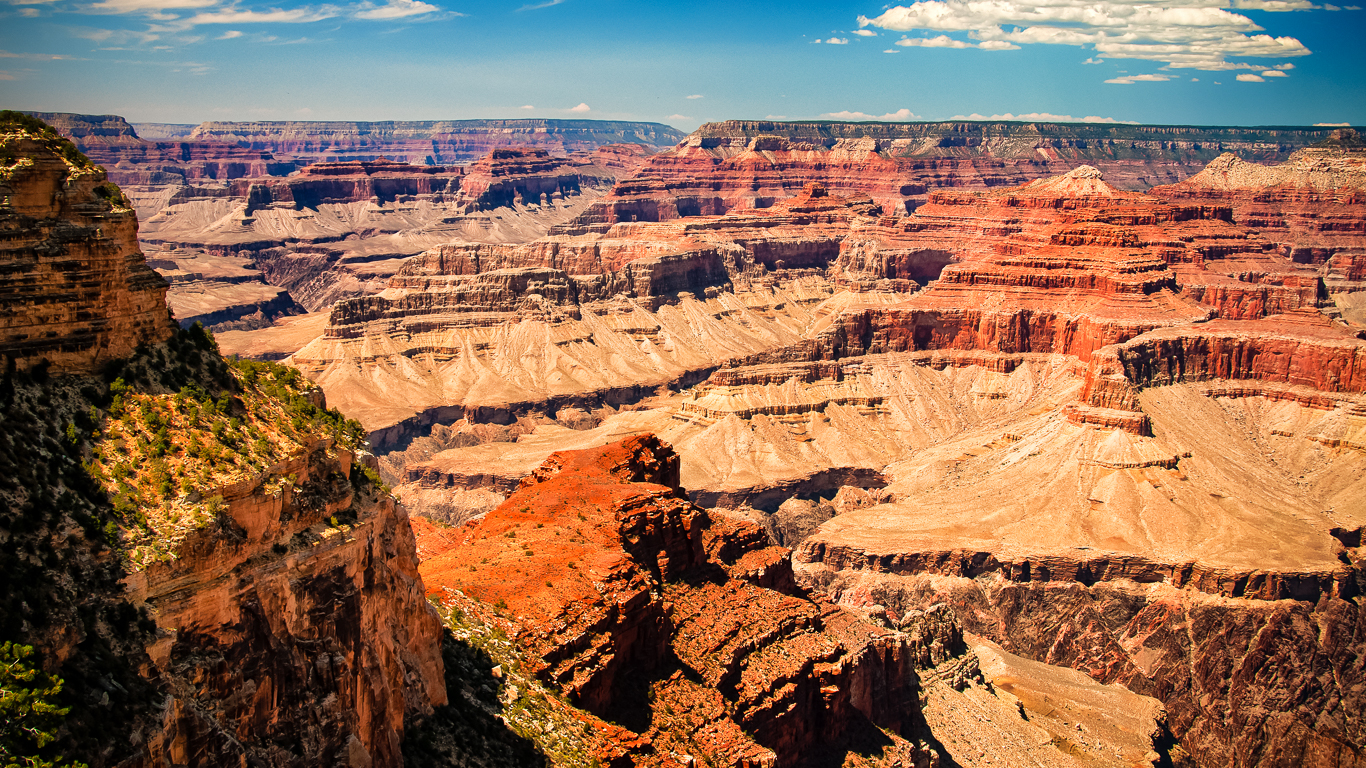 The Grand Canyon National Park should be on every family’s travel itinerary because it will make such a big impression on both kids and adults. The awe-inspiring 277-mile-long, 1-mile-deep canyon carved by the Colorado River is one of the most popular national parks — so expect big crowds during spring, summer and fall.

And if you want to go on an unforgettable camping trip for less, the entrance fee is only $35 for a seven-day pass for a vehicle. You can camp from $18 a night, or stay in one of the many lodges, which start around $140 a night and need to be booked well in advance. 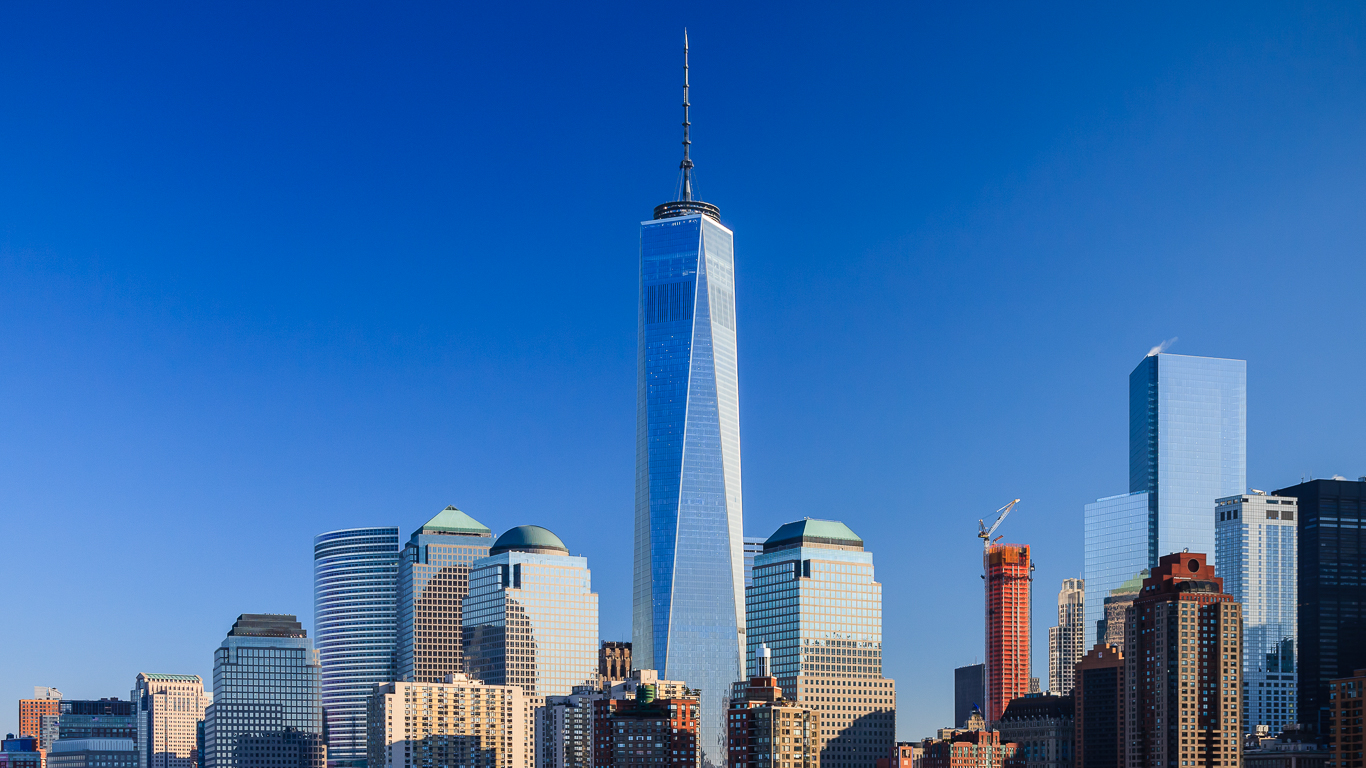 The tallest building in the U.S., One World Trade Center now stands at the site of the World Trade Center complex that was destroyed during the Sept. 11, 2001, terrorist attacks. You can wow your kids by hopping on an elevator that will take them to the 102nd floor of this 1,776-foot building in 47 seconds and then letting them peer out over New York City from the observatory. Tickets are $35 for adults, $29 for children.

Afterwards, you can stroll for free through the 9/11 Memorial Plaza, which occupies eight of 16 acres of the World Trade Center and features the names in bronze of every person who died in the 1993 WTC bombing and 2001 attacks. And, you can visit the 9/11 Memorial Museum in the heart of the original World Trade Center site by paying $26 for adults, $15 for kids ages 7 to 12 and $20 for young adults 13 to 17. 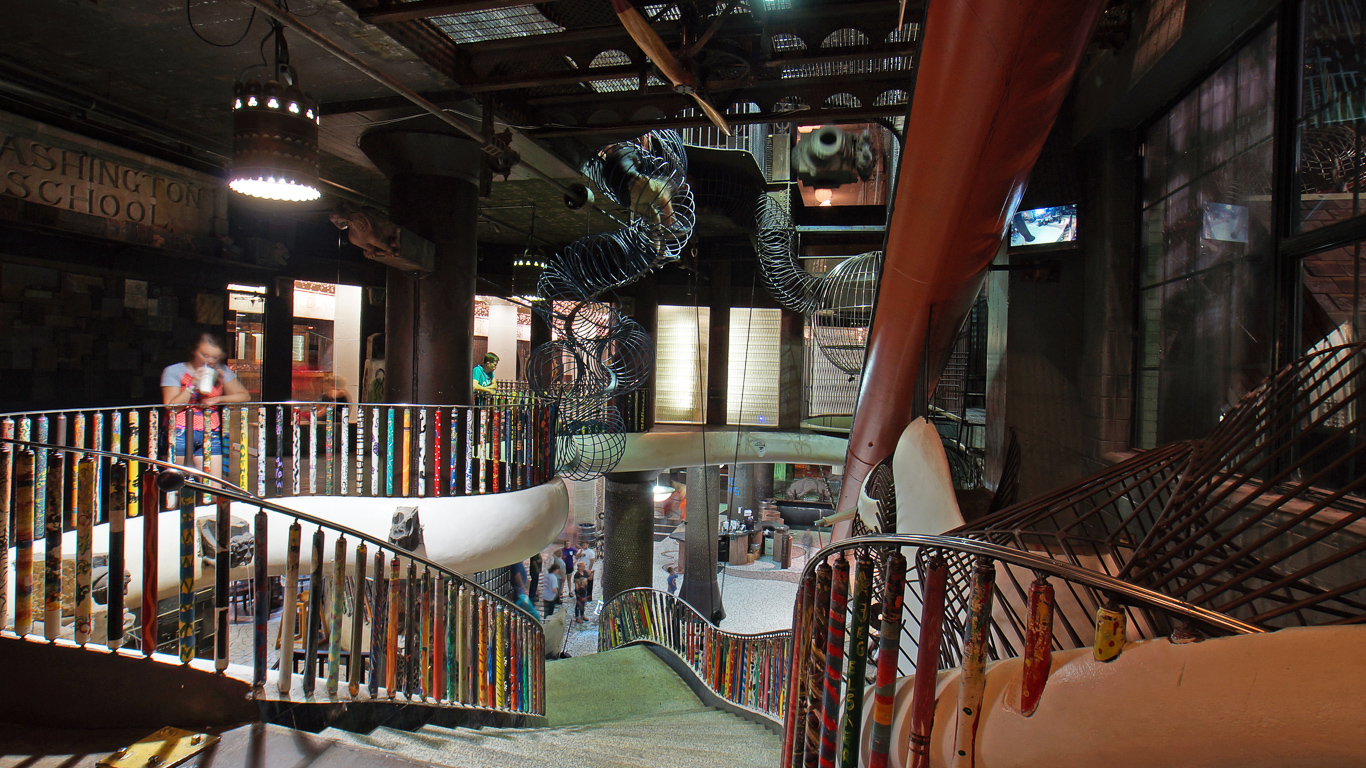 There are children’s museums, and then there’s the City Museum — an awesome museum for kids of all ages in St. Louis, Mo. You can crawl through suspended tunnels, slide down a 10-story slide, ride the Ferris wheel or simply marvel at how found objects were used to transform this 600,000-square-foot factory into an architectural marvel. Admission is $16.

While in St. Louis, you also can take a ride to the top of the Gateway Arch — the nation’s tallest monument — for $14 for adults, $11 for kids. And at the free Citygarden, parents can stroll through the sculpture garden while the kids splash in the fountains. 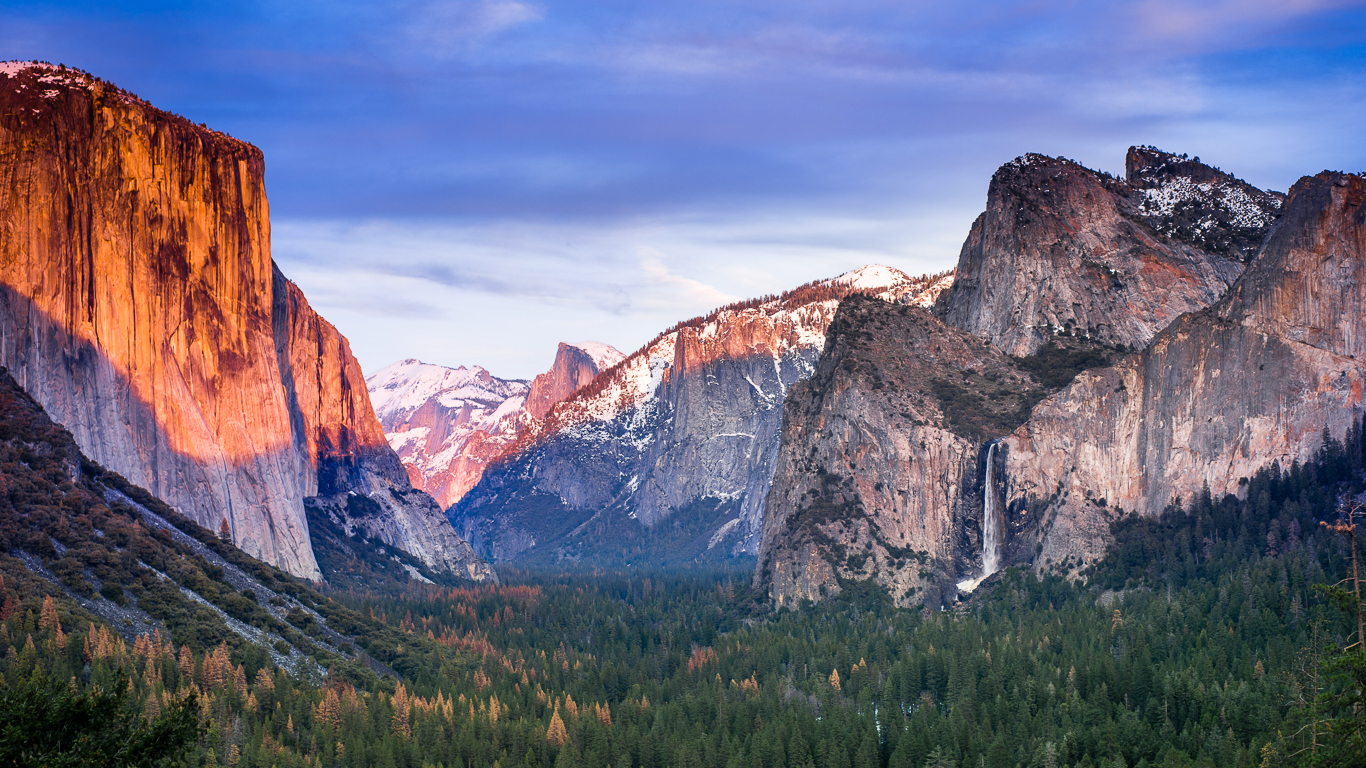 This national park in California is not only home to the tallest waterfall in North America but also giant sequoia trees. Yosemite also has spectacular rock formations, including the often-photographed Half Dome and El Capitan.

You can get a seven-day vehicle pass to the park for $35, and camp from $12 per night or stay in lodges ranging from tent cabins to deluxe rooms. Keep your costs low at Yosemite by avoiding these hidden expenses. 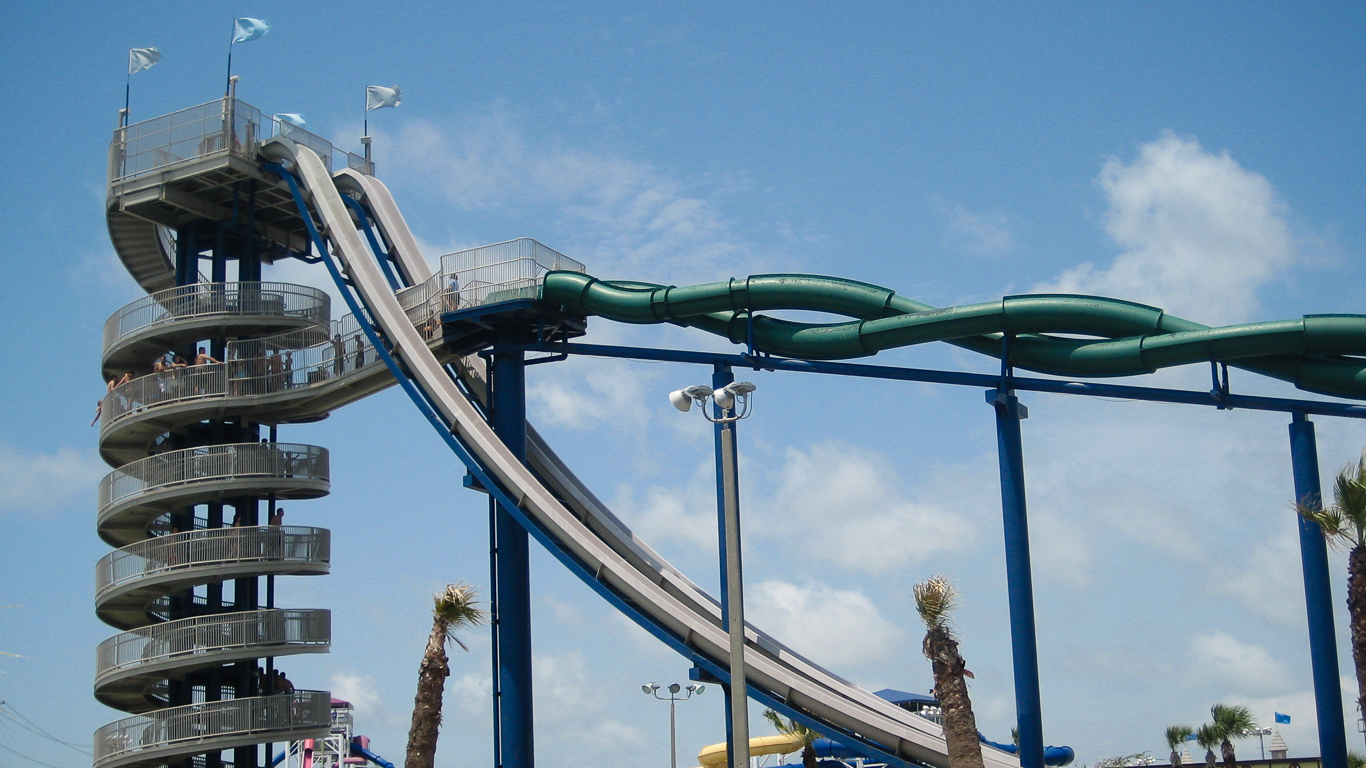 Ranked as the world’s best water park by Amusement Today, Schlitterbahn Waterpark & Resort in New Braunfels, Texas, has water rides, slides and features for all ages. You can relax in heated pools, float down man-made rivers or zip down slides that are several stories high.

General admission is $43.99 for children and $56.99 for adults, but the park has several discount days. 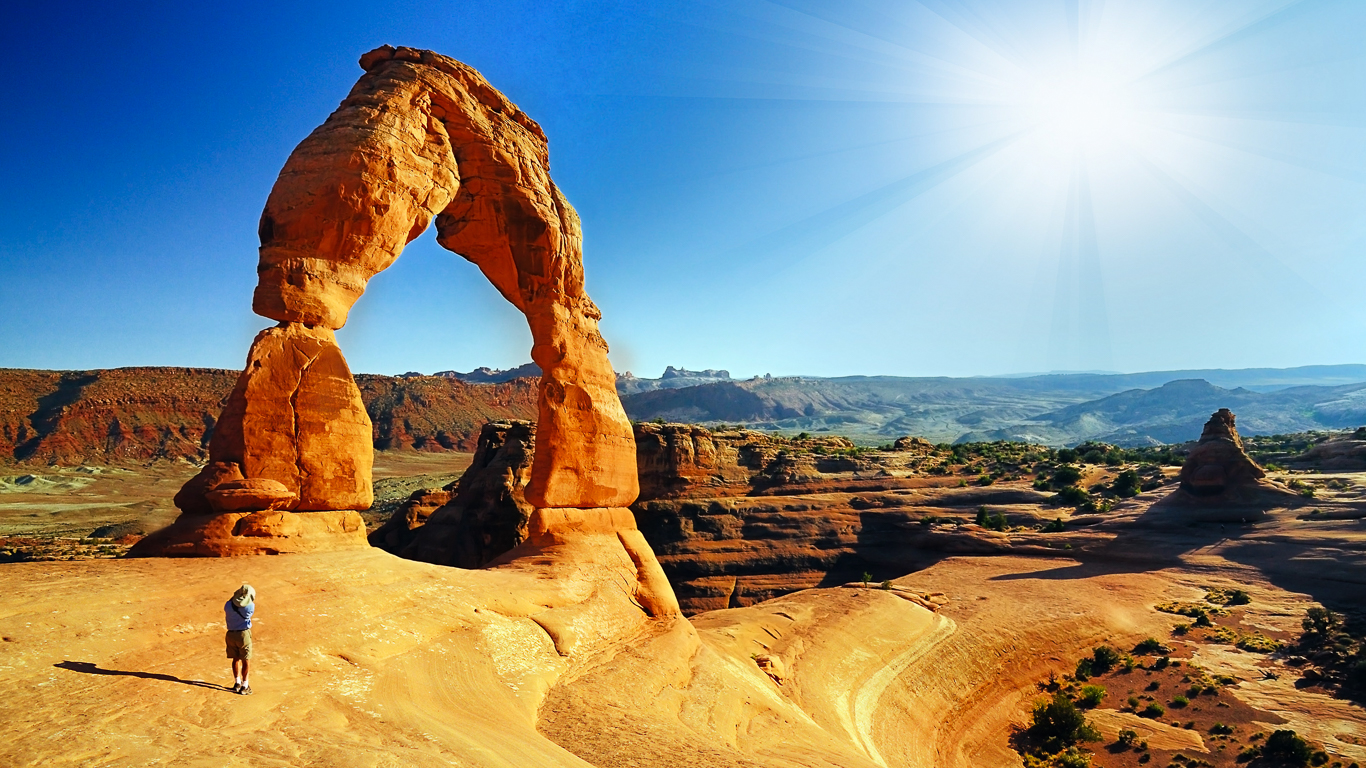 A trip to Arches National Park near Moab, Utah, is almost like visiting another planet because the landscape of more than 2,000 natural stone arches and red rock formations is truly other-worldly.

For $30, you get a seven-day vehicle pass, but you can easily drive through all of the park’s roads in a day. There are no lodges in Arches, but you can camp for $25 a night or find accommodations in nearby Moab.

While there, you can also visit nearby Canyonlands National Park to see spectacular buttes, canyons and sandstone spires that are hundreds of feet tall. 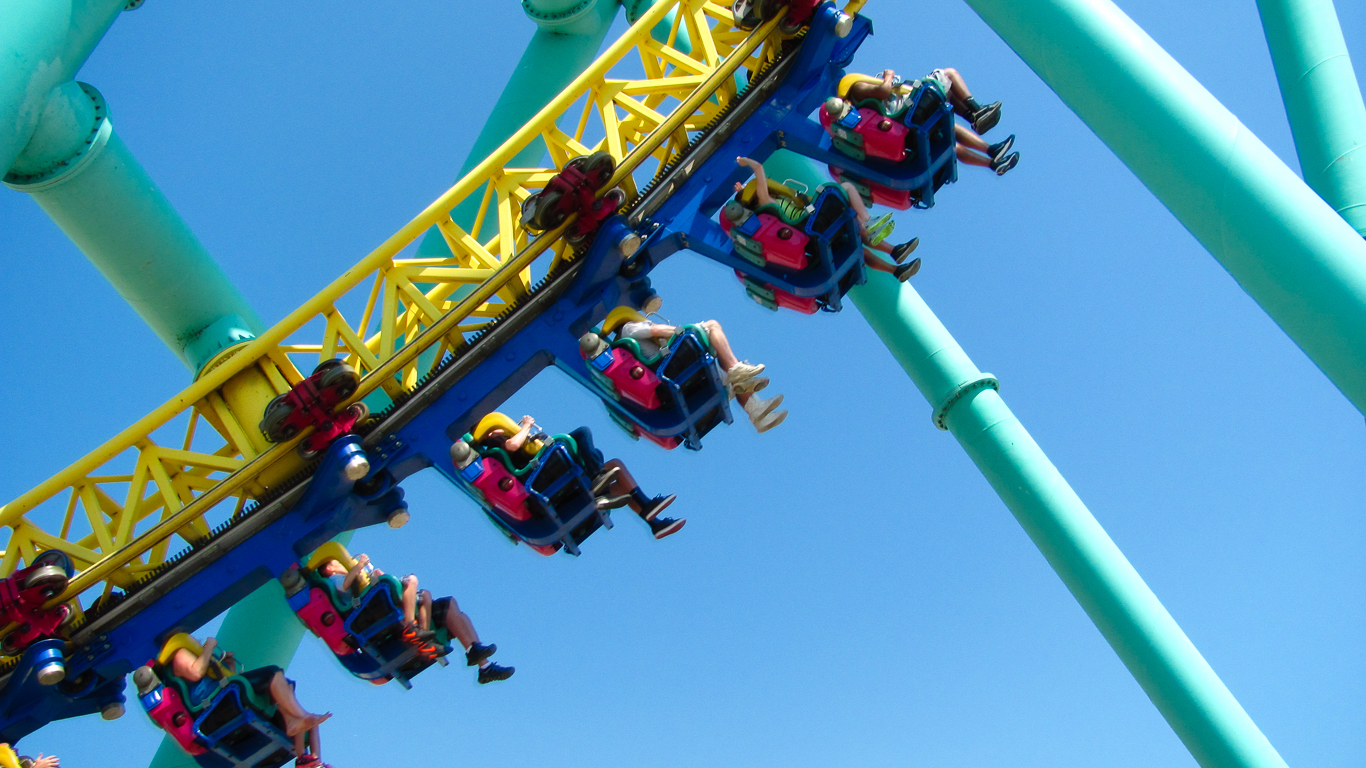 If you want to go on a thrilling family vacation, head to the roller coaster capital of the world, Cedar Point in Sandusky, Ohio. With 18 roller coasters, it consistently ranks as one of the top amusement parks in the world.

For those who don’t want the adrenaline rush, Cedar Point also offers tame family rides, kids’ rides and live entertainment. Admission for 2020 is currently $45.99 with the pre-season sale. 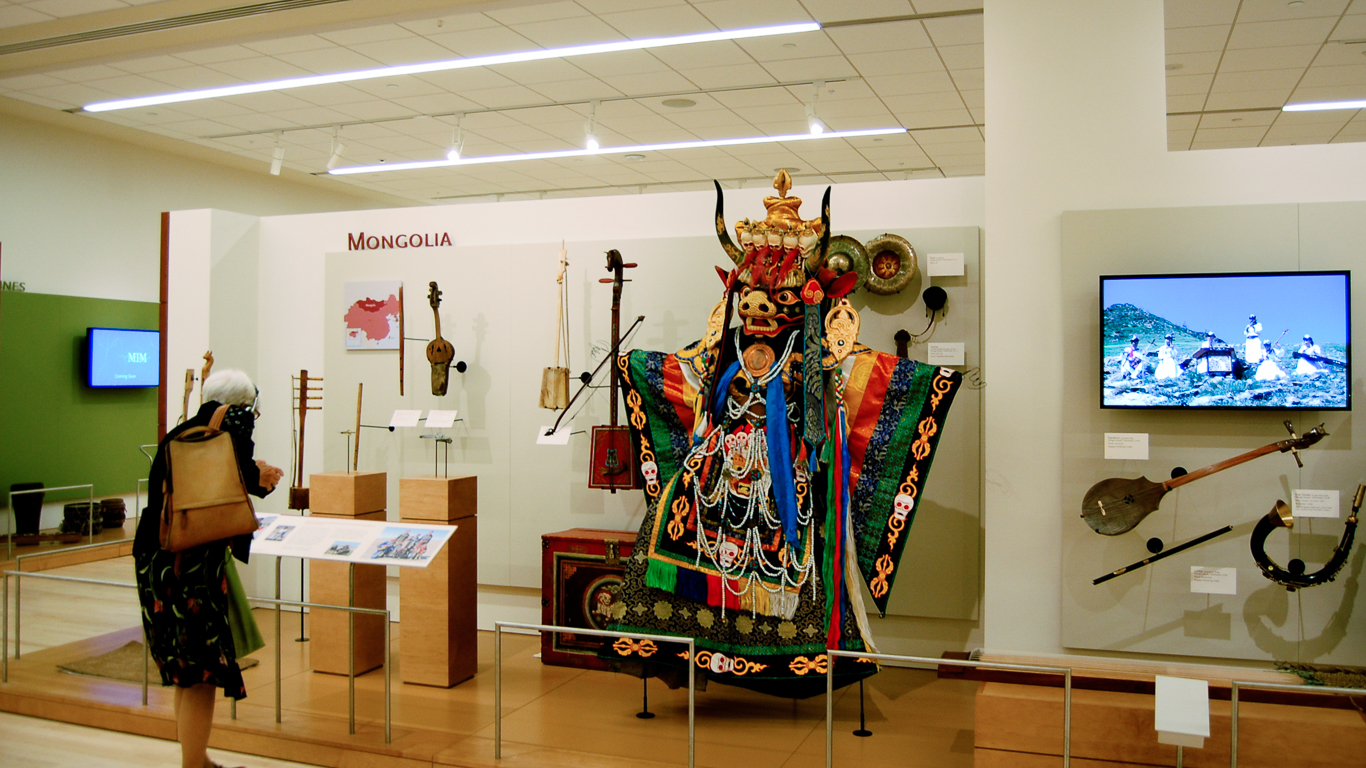 A visit to the Musical Instrument Museum in Phoenix is like taking a musical tour of the world. The museum has a collection of more than 13,000 instruments — including Eric Clapton’s guitar and John Lennon’s piano — from 200 countries and territories. Visitors can wear wireless headsets to hear the instruments being played and listen to live performances.

General admission ranges from $10 to $20; children under 3 are free. 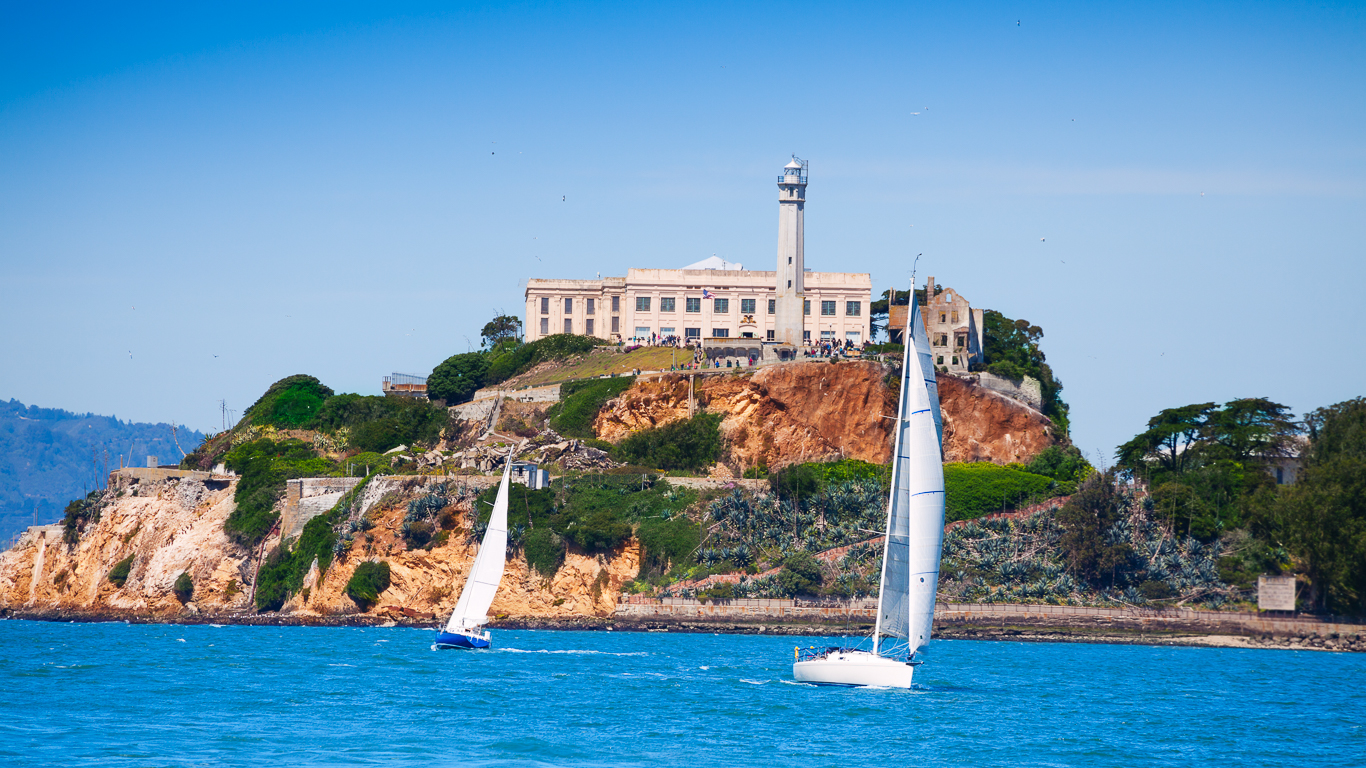 Give your kids a lesson in history with a tour of Alcatraz Island off the coast of San Francisco. It’s best known for the years it operated as a U.S. penitentiary that housed infamous inmates such as Al Capone. But Alcatraz also was the first lighthouse on the West Coast, a Civil War fortress and the birthplace of the American Indian Red Power movement. 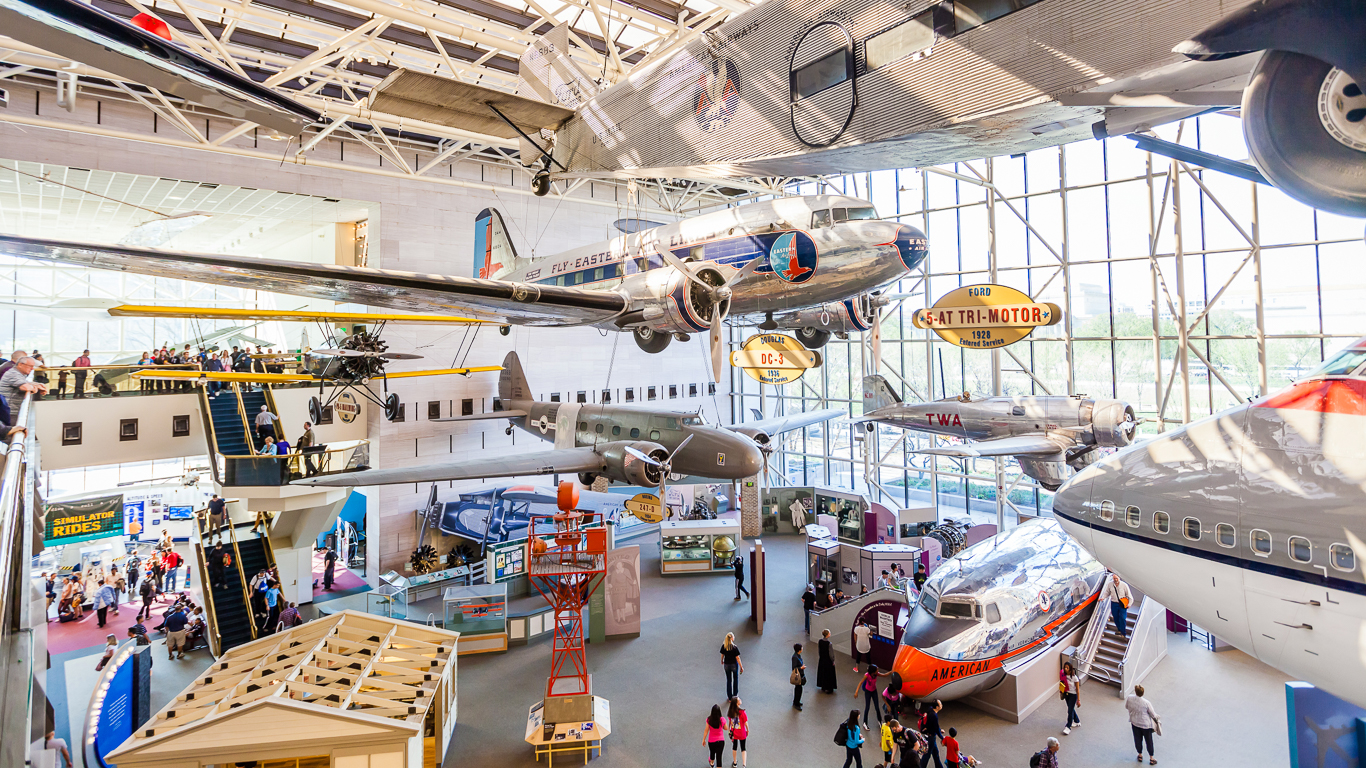 A family trip to Washington, D.C., isn’t complete without a visit to the National Air and Space Museum. Kids and parents will marvel at thousands of aviation and space artifacts, including the airplane the Wright brothers flew during the world’s first successful powered flight and the Apollo 11 Command Module from the first manned lunar landing mission.

The best part is that it’s free, as is admission to most of the other 18 museums and galleries that are part of the Smithsonian Institute. 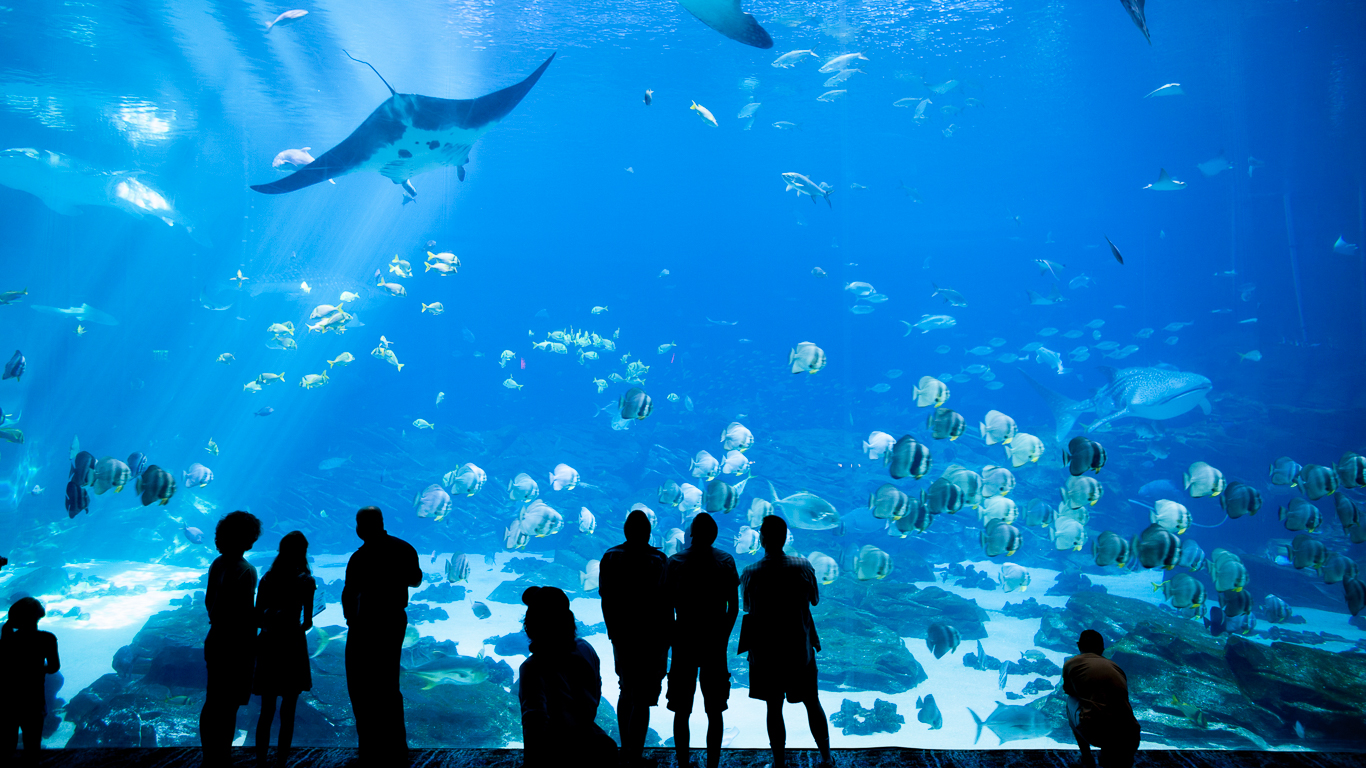 Not only is the Georgia Aquarium in Atlanta one of the largest aquariums in the world, but it also has one of the most diverse assortments of aquatic animals — from harbor seals and penguins to manta rays and beluga whales. Visitors can even interact with several of the animals, including dolphins and sea otters. The Georgia Aquarium is also the only place in the world where you can swim with whale sharks, making it one of the best family vacation spots around.

General admission starts at $39.95, but there are additional charges for encounters and the whale shark program. 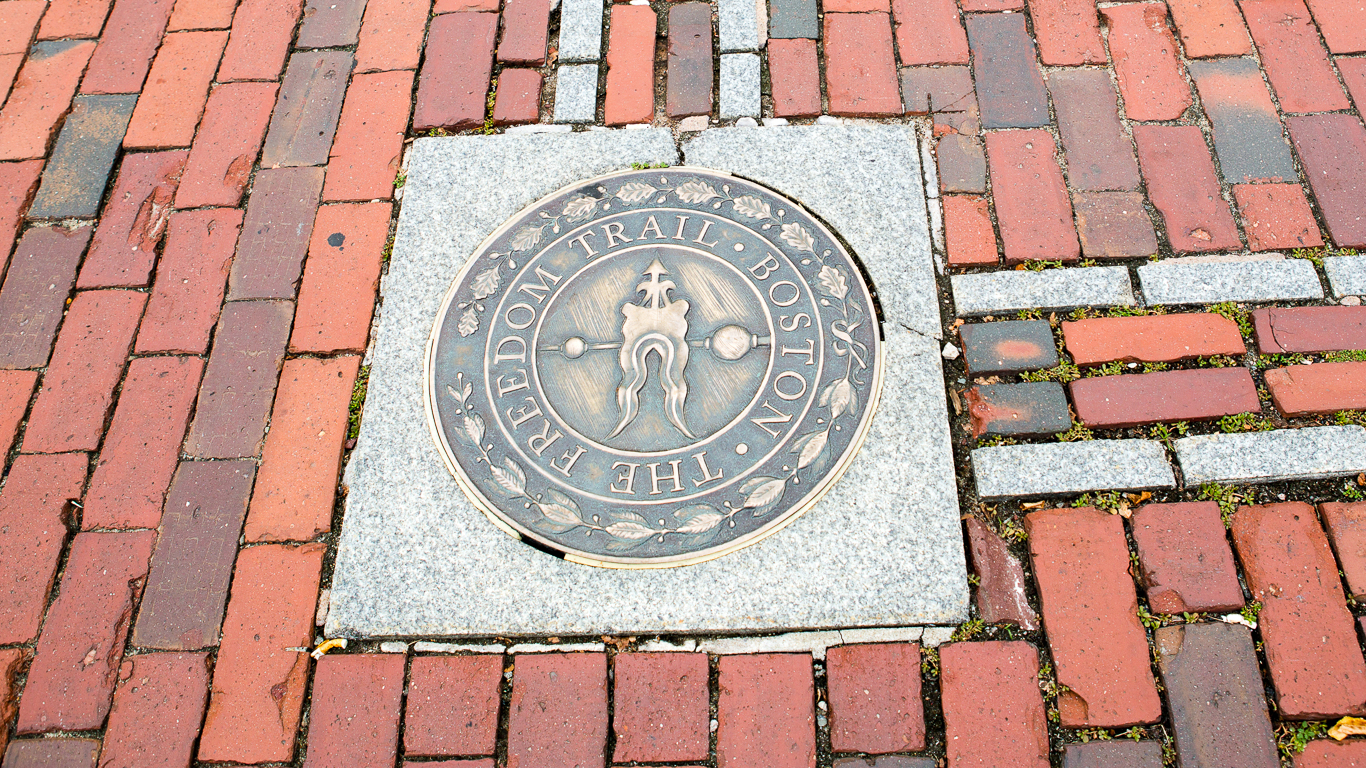 Families can walk into history along Boston’s Freedom Trail, a 2.5-mile stretch of 16 historic sites that tell the story of the American Revolution. Sites include the Old State House, which was the center of events that sparked the American Revolution, and the USS Constitution, the warship known as “Old Ironsides.”

If you’re looking for family vacation ideas, consider taking a tour led by a costumed guide for $12 for adults or $6.50 for kids. 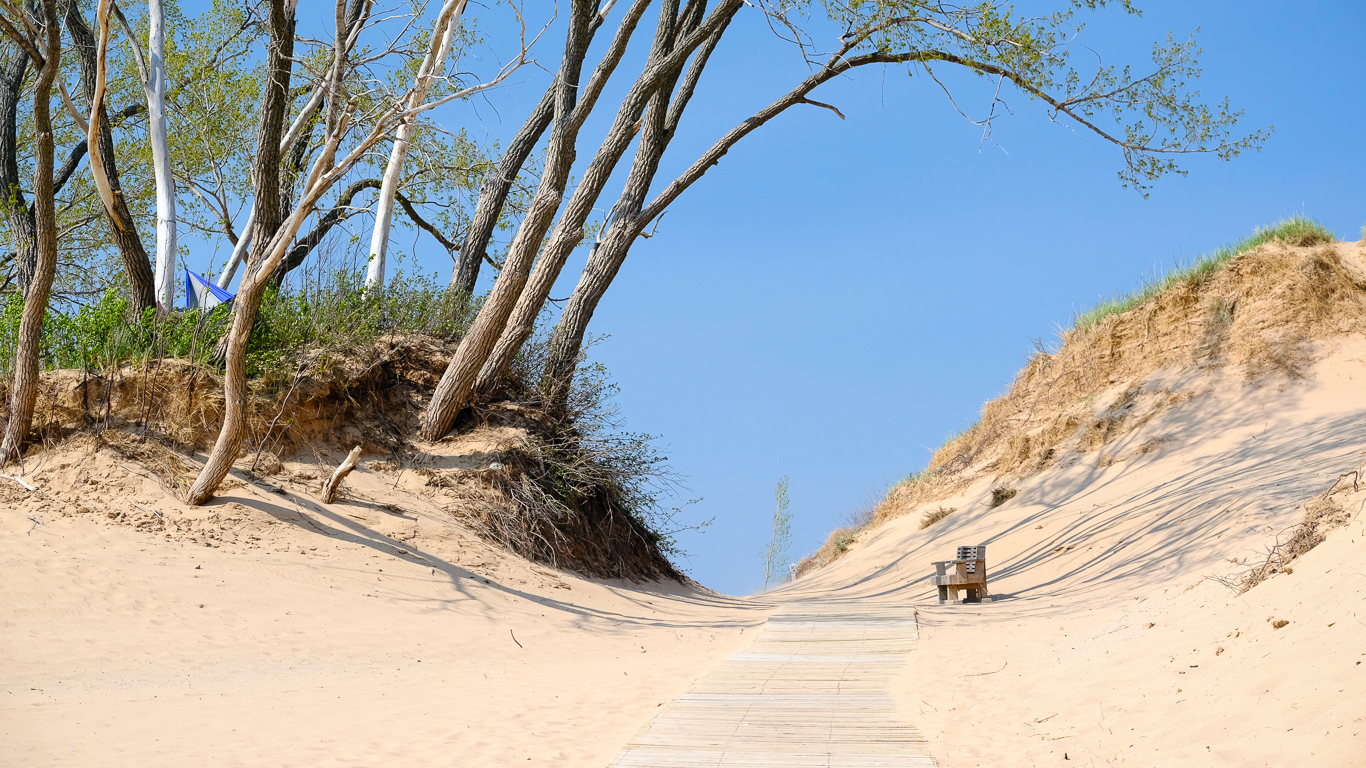 You can hike, hang out on the beach on Lake Michigan or climb the massive dunes that give this national lakeshore its name. You also can float down the rivers by boat or inner tube, view wildlife along the lakeshore or ride your bike along paved trails in this Michigan park.

There’s a $25 fee for a seven-day vehicle pass. The park also has campsites with nightly fees of $10 and up. 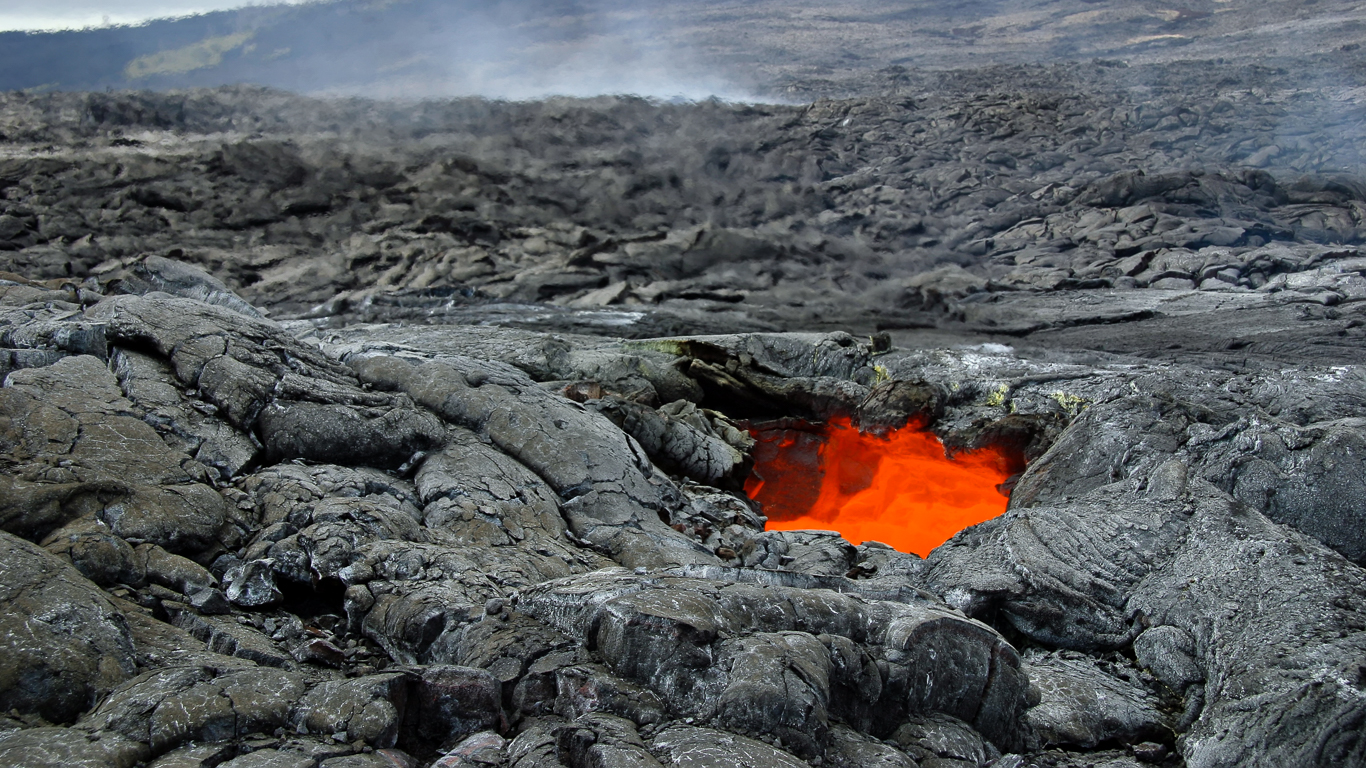 A Hawaiian vacation can be expensive — but not if you know how to find the best deals in Hawaii. If your family springs for a trip to the Aloha State, go see some of the volcanoes that helped create this chain of islands at Hawai’i Volcanoes National Park.

The park, which is on Hawaii’s Big Island, features hiking trails through old lava tubes, scenic drives near active craters and lava flows into the ocean. Admission to the park is $30 per vehicle for a seven-day pass. 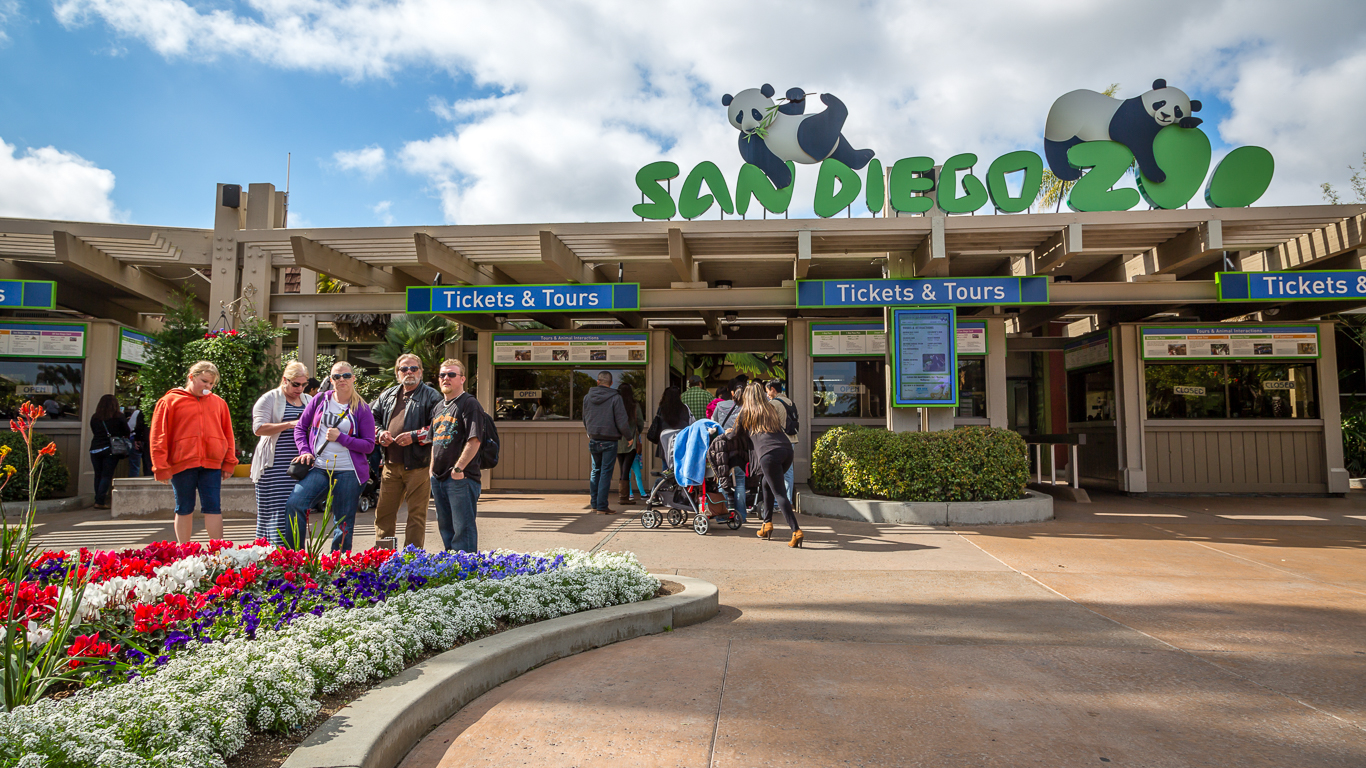 A trip to Southern California should include a visit to the San Diego Zoo, which features more than 3,700 animals in their natural habitats. You can take a guided bus tour, ride the tram and see animal shows with a $58 one-day pass ($48 for kids ages 3 to 11). The San Diego Zoo also offers special experiences, such as animal interactions and behind-the-scenes views. 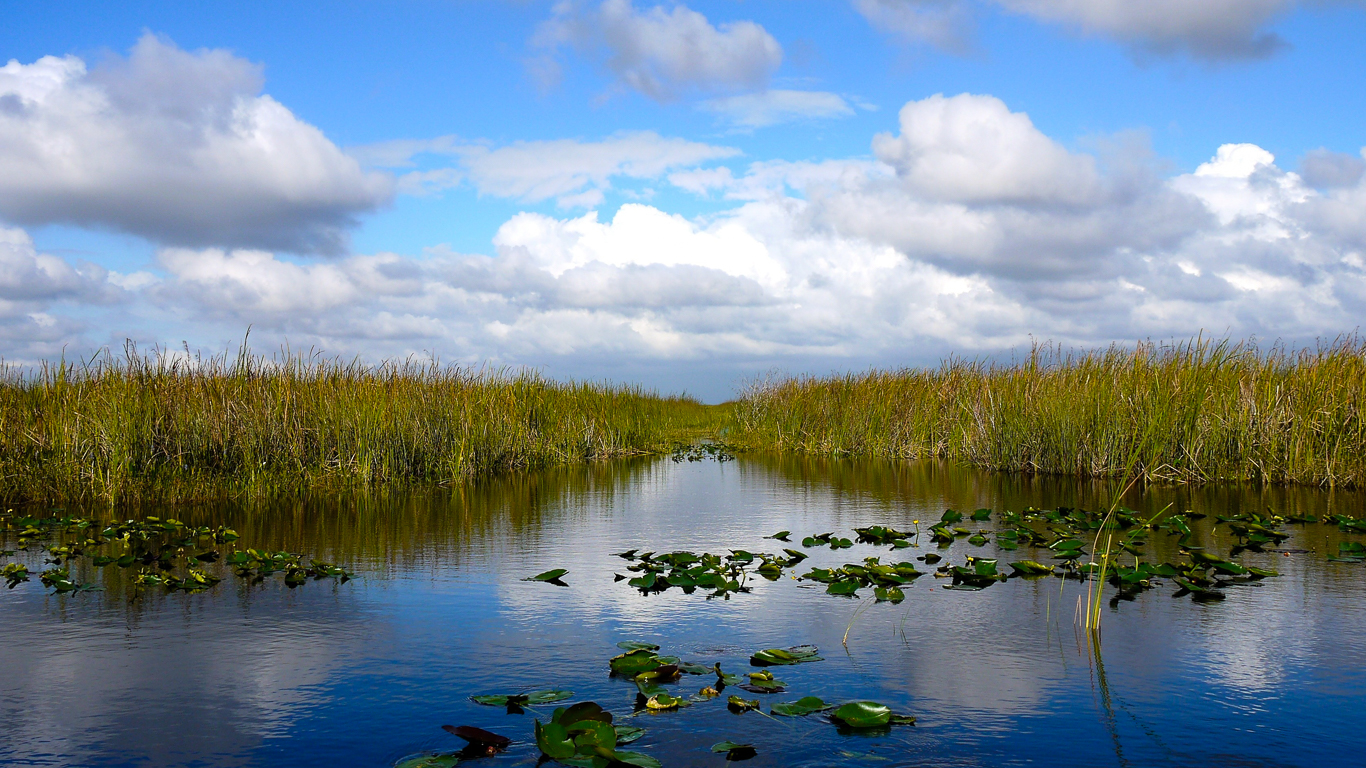 This subtropical wilderness in Southern Florida teems with wildlife, including more than 360 bird species, deer, river otters, manatees and alligators. You’ll see these animals as you hike Everglades National Park’s trails or explore the area by boat. There’s a $30 entrance fee for vehicles at this picturesque national park, which is good for seven days. 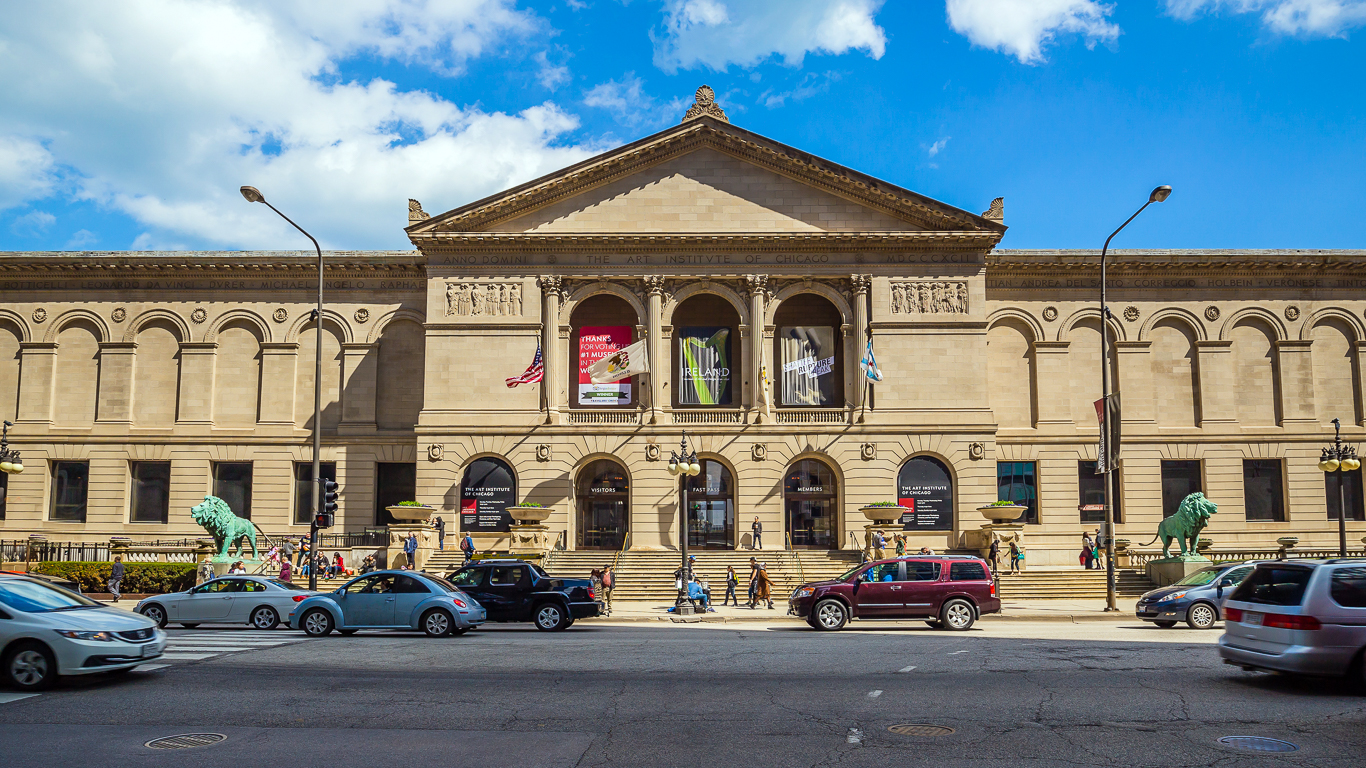 If you want to expose your children to famous artwork from around the world, visit the Art Institute of Chicago. This museum houses about 300,000 works of art ranging from ancient to contemporary pieces, and children younger than age 14 get in free (adults pay $25).

Across the street is Millennium Park, where the kids can splash in the fountains and have their picture taken by the iconic Cloud Gate — the bean-shaped stainless steel structure. 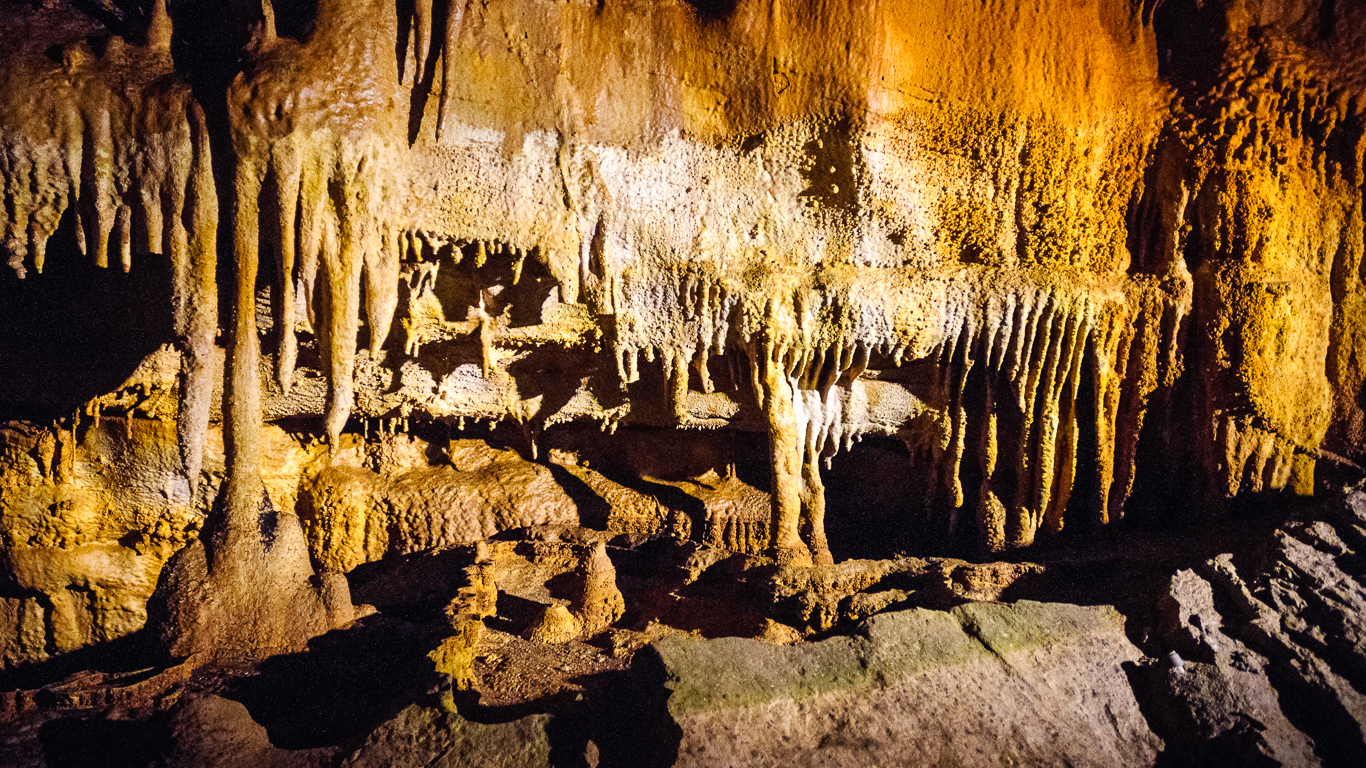 This national park in Kentucky is home to the world’s longest cave system. You’ll see dramatic formations on all tours that let visitors explore the various parts of the cave, including the more “wild” areas for those who don’t mind tight, dark spaces. 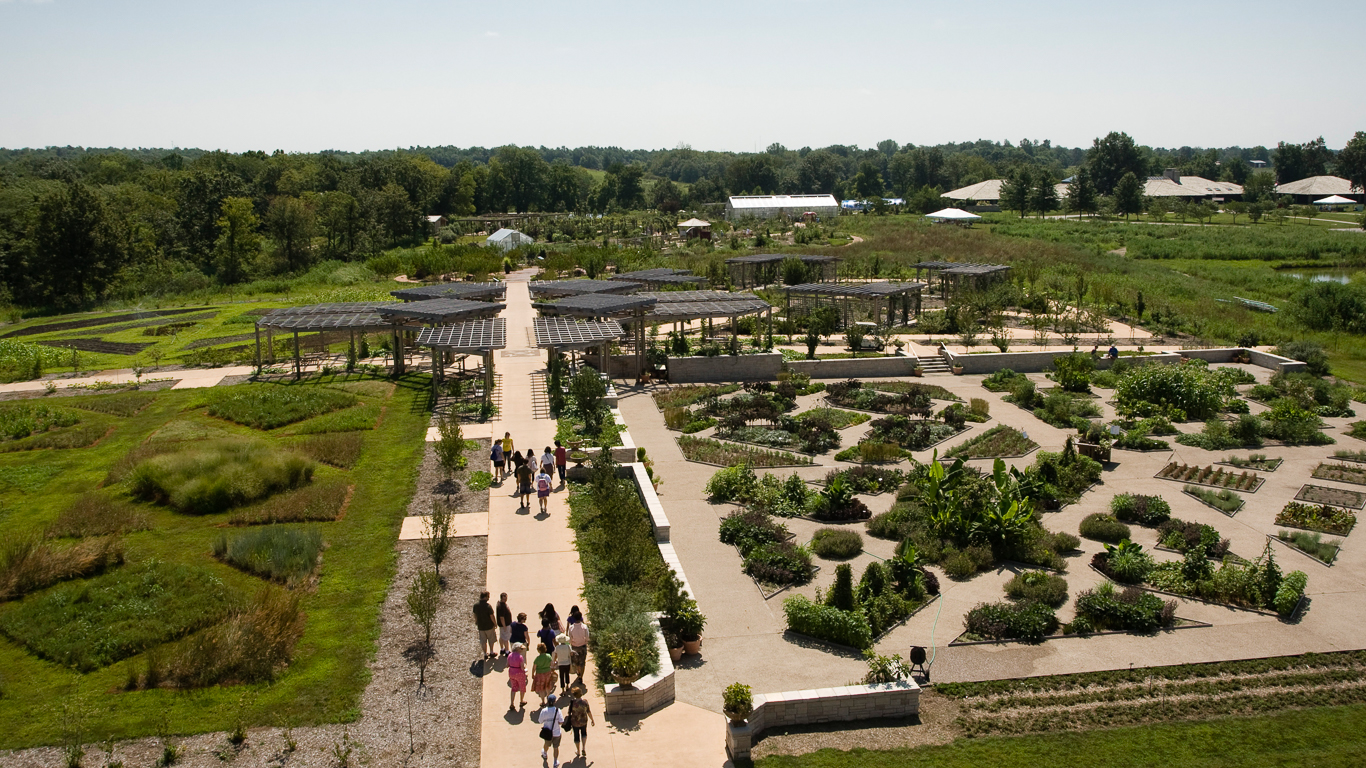 Kids can learn about where their food comes from at America’s largest edible landscape in Heartland Harvest Garden, which is located at Powell Gardens near Kansas City, Mo. You can see nuts, grains, fruits and vegetables and sample some of the produce from this garden.

General admission is $10 for adults and $4 for children in the spring, summer and fall months. 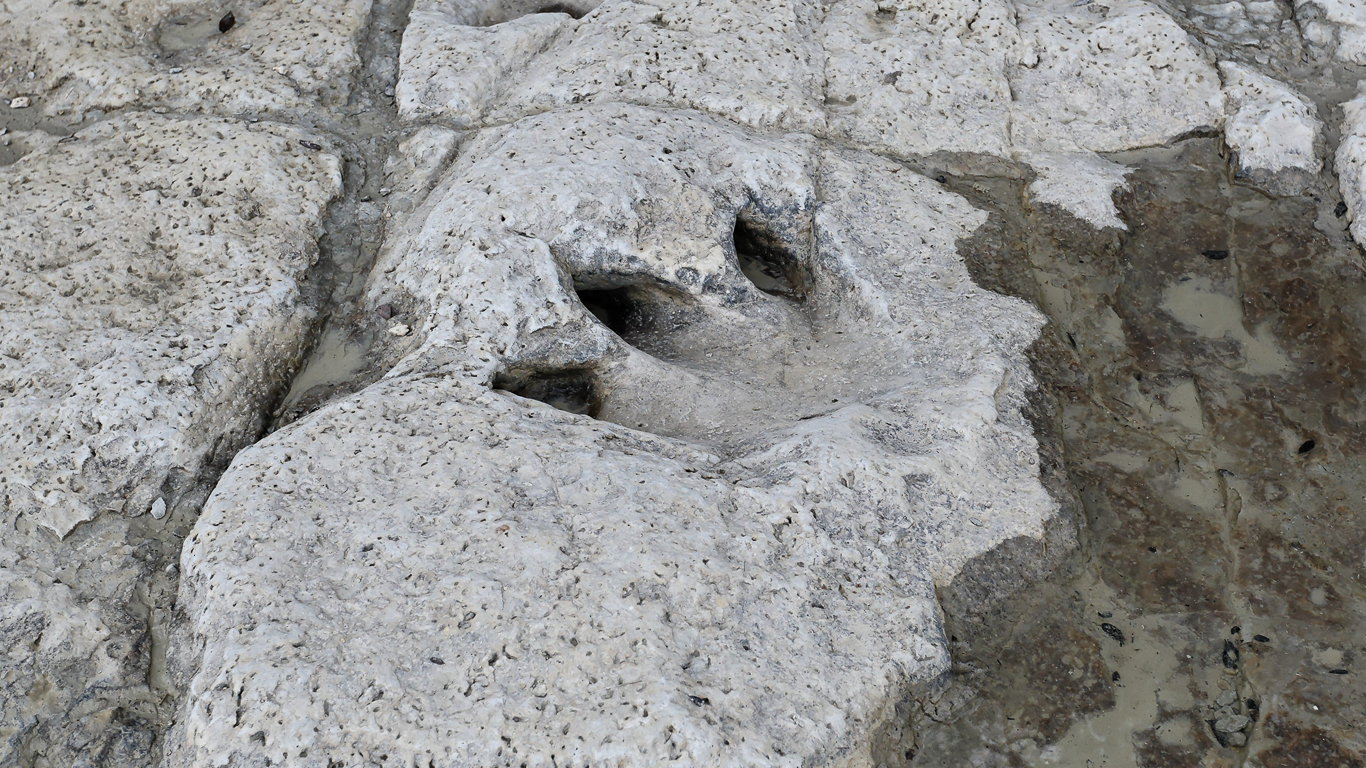 If your kids love dinosaurs, they can see where they once roamed at Dinosaur Valley State Park. You can find dinosaur tracks in the riverbed, watch the wildlife that still roams the area or go geocaching — a treasure hunt — in this park near Fort Worth, Texas. 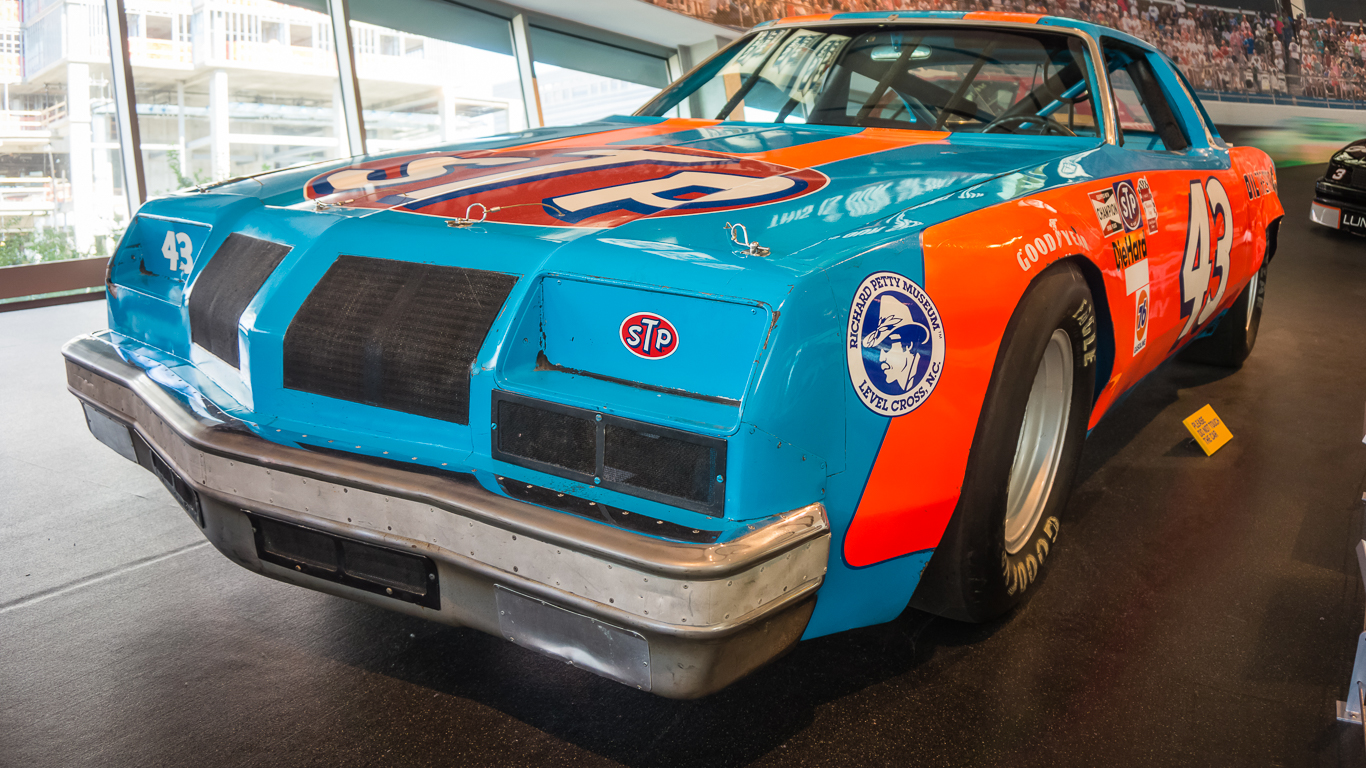 Car lovers and racing fans can learn about NASCAR’s history at this high-tech venue with interactive exhibits in Charlotte, N.C. Visitors can see historic race cars, get a behind-the-scenes look at how NASCAR teams prepare for race day and “drive” in a racing simulator. Ticket prices range from $18 to $25. 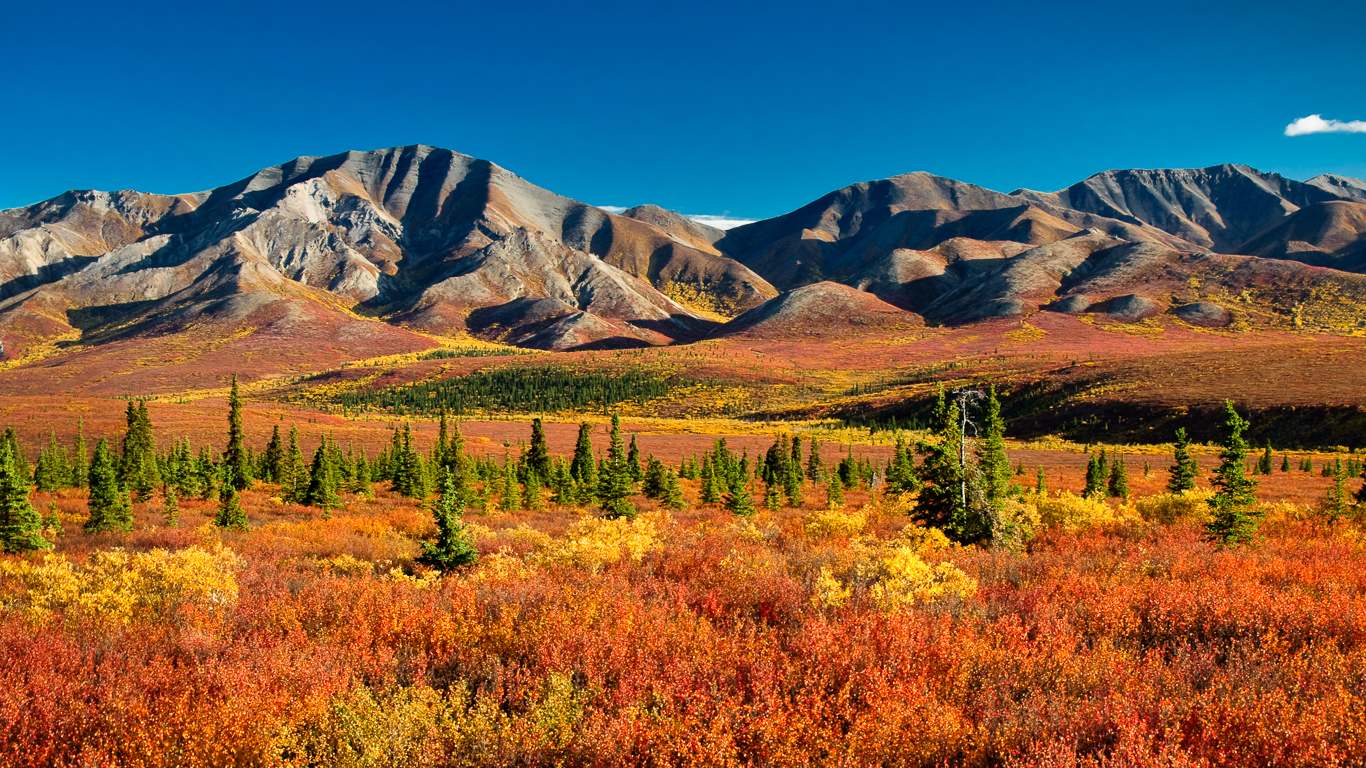 You can get a true taste of the Alaskan wilderness at this 6 million-acre national park. You can see sled-dog demonstrations, get a glimpse of wildlife such as moose, caribou and grizzly bears and marvel at North America’s tallest peak — the 20,310-foot-tall Denali. The entrance fee is $15 per person over the age of 15. There are six campgrounds in the park, with fees starting from $15 per night. 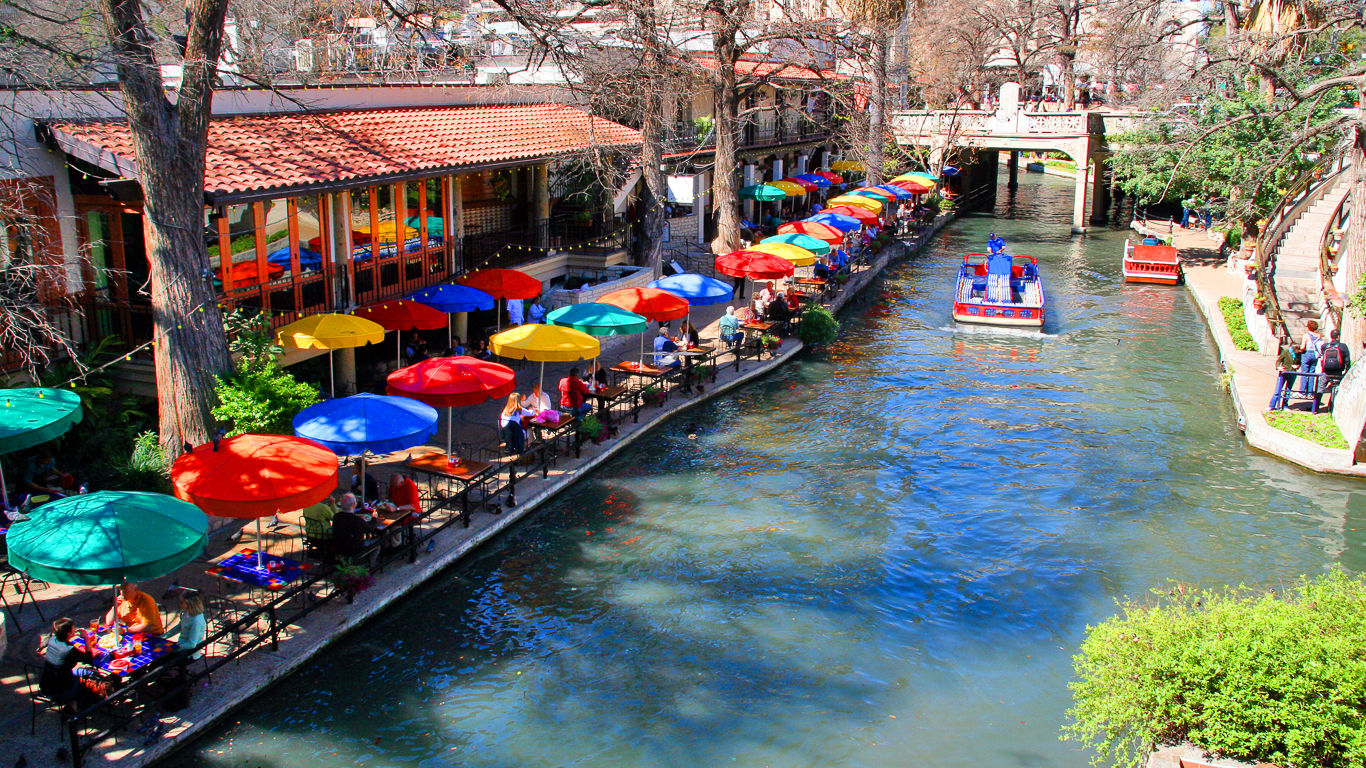 You can stroll for free along the banks of the San Antonio River on this network of walkways that winds through Downtown San Antonio. It’s lined with museums, restaurants, shops and historic sites — including the Alamo, a Spanish mission that was the site of an 1836 battle in the Texas Revolution and can be visited for free.