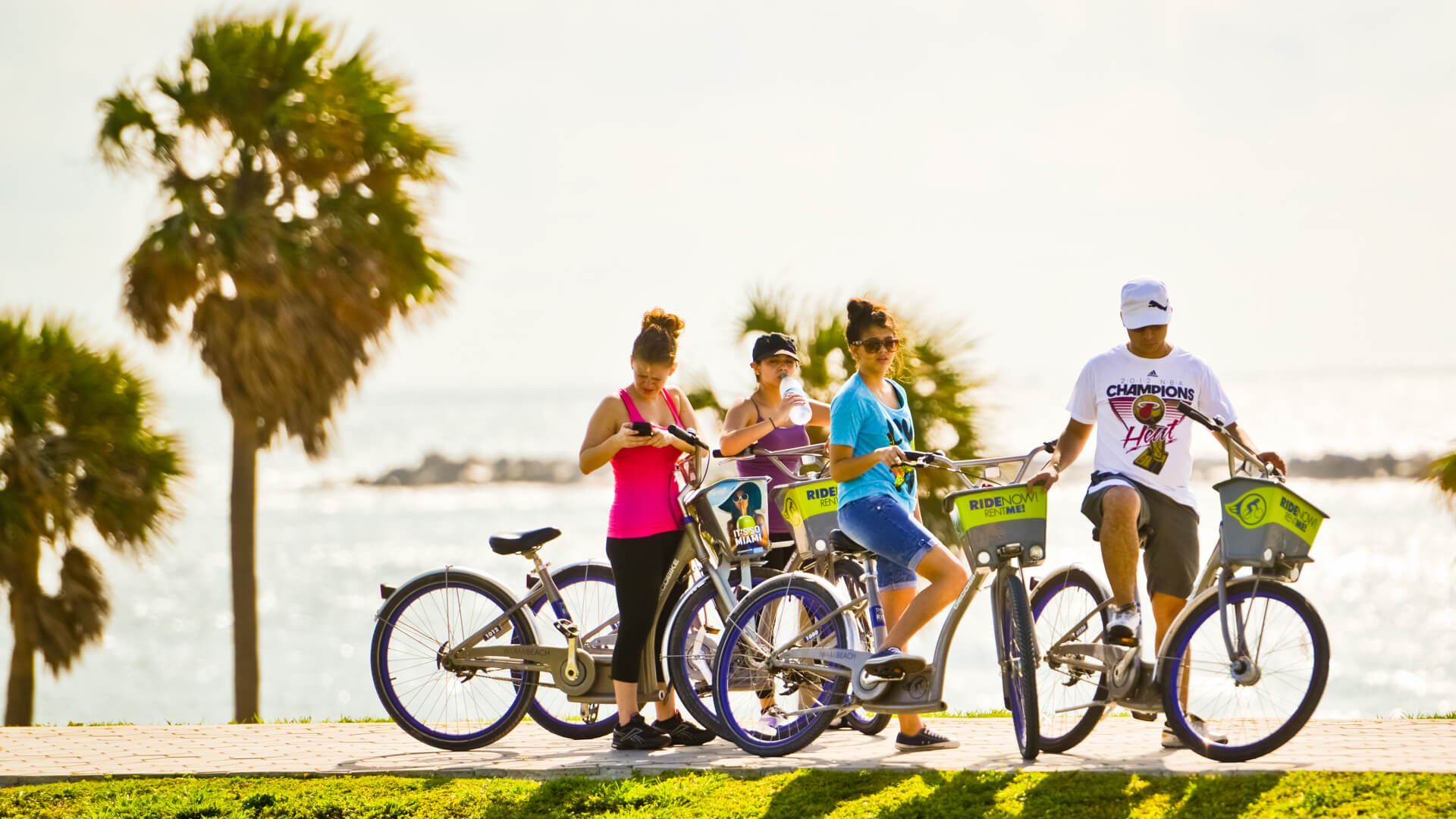 Preferring biking over car rides or just enjoying biking as a frequent recreational activity might mean it’s time to move to a bike-friendly city. Only some cities across the United States cater to biking enthusiasts with designated bike lanes, rest stops and easily accessible bike racks, however.

Click through and check out the 26 most affordable cities across America for bikers. 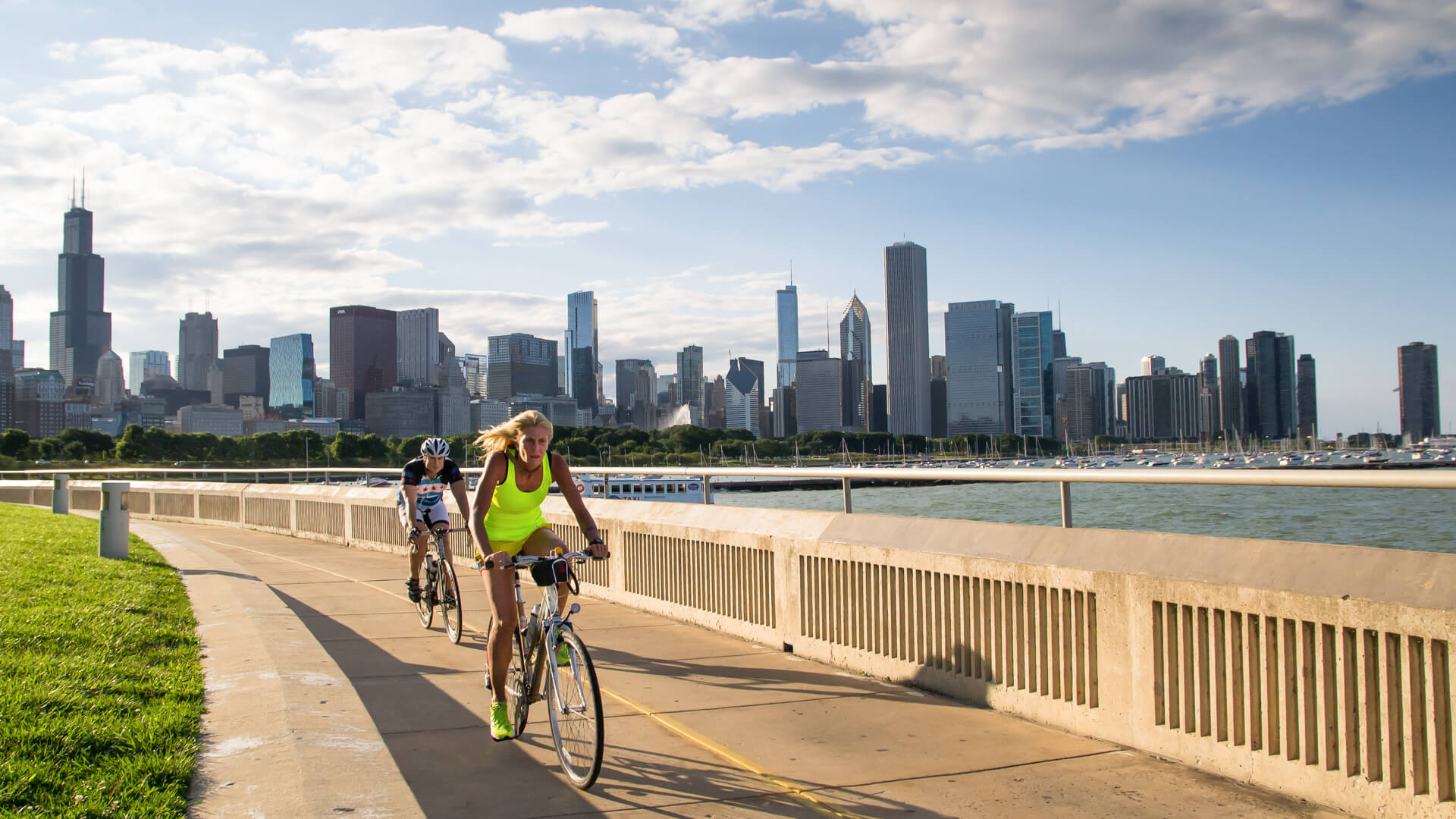 Even though it’s a bustling metropolis, the city of Chicago takes care of its residents who love to bike with plenty of bike lanes and the country’s second-largest bike share system called Divvy. The city has even invested money in rebuilding many of its bike lanes with concrete curbs. The lakefront on Chicago’s north side is the perfect place to cruise along the beach on a bike, but you’ll also find a number of bike-friendly parks and public spaces where you can see gardens, historic buildings and other sites.

See which charming beach towns you can visit on a budget. 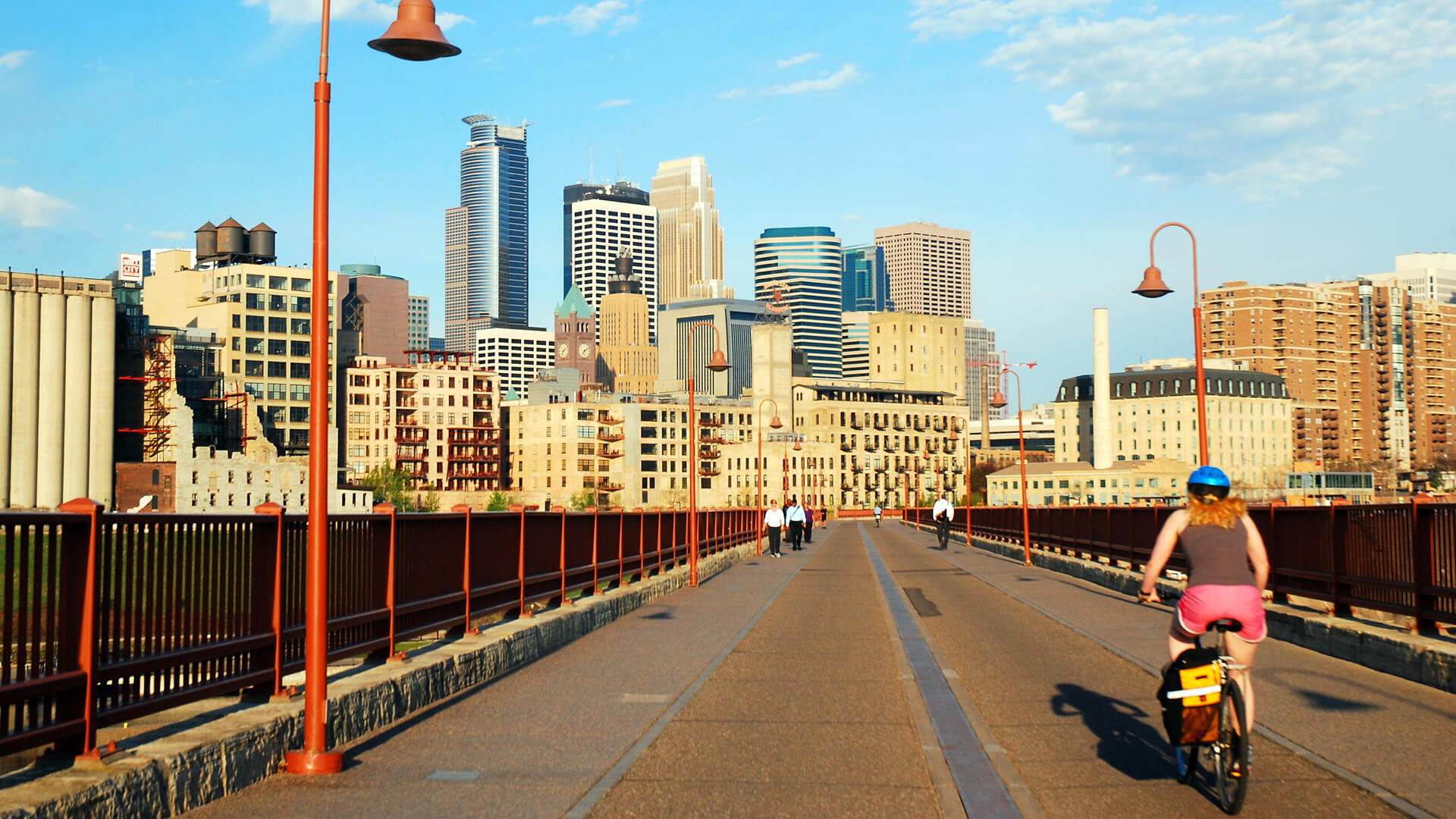 The abundance of abandoned railroads around Minneapolis led to the city’s intricate bike paths that now take you around the city center and all across town. Minneapolis also boasts 40 miles of bike-friendly boulevards and also has the Nice Ride bike share system in place. Additionally, the city’s three major corridors in the downtown area have been paved out for more protected bike lanes by 2020.

See Also: These 12 Cities Have the Most Job Openings 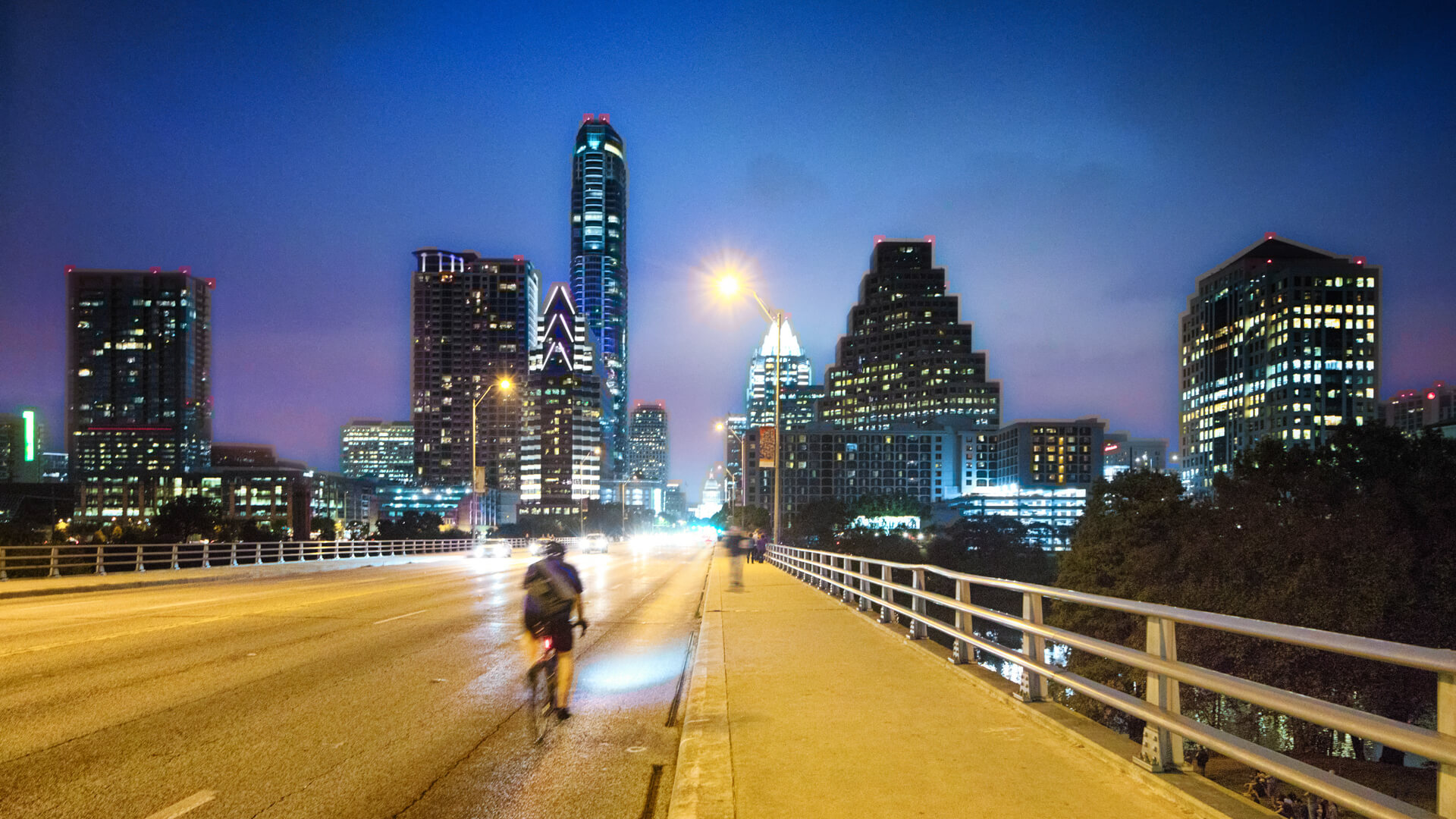 As Austin continues to expand and grow its infrastructure, on-street biking opportunities abound. The city has almost 10 miles of protected bike lanes, and many residents make their way around the downtown area on a bike. Recreational biking at McKinney Falls State Park is a popular activity during the warmer months. 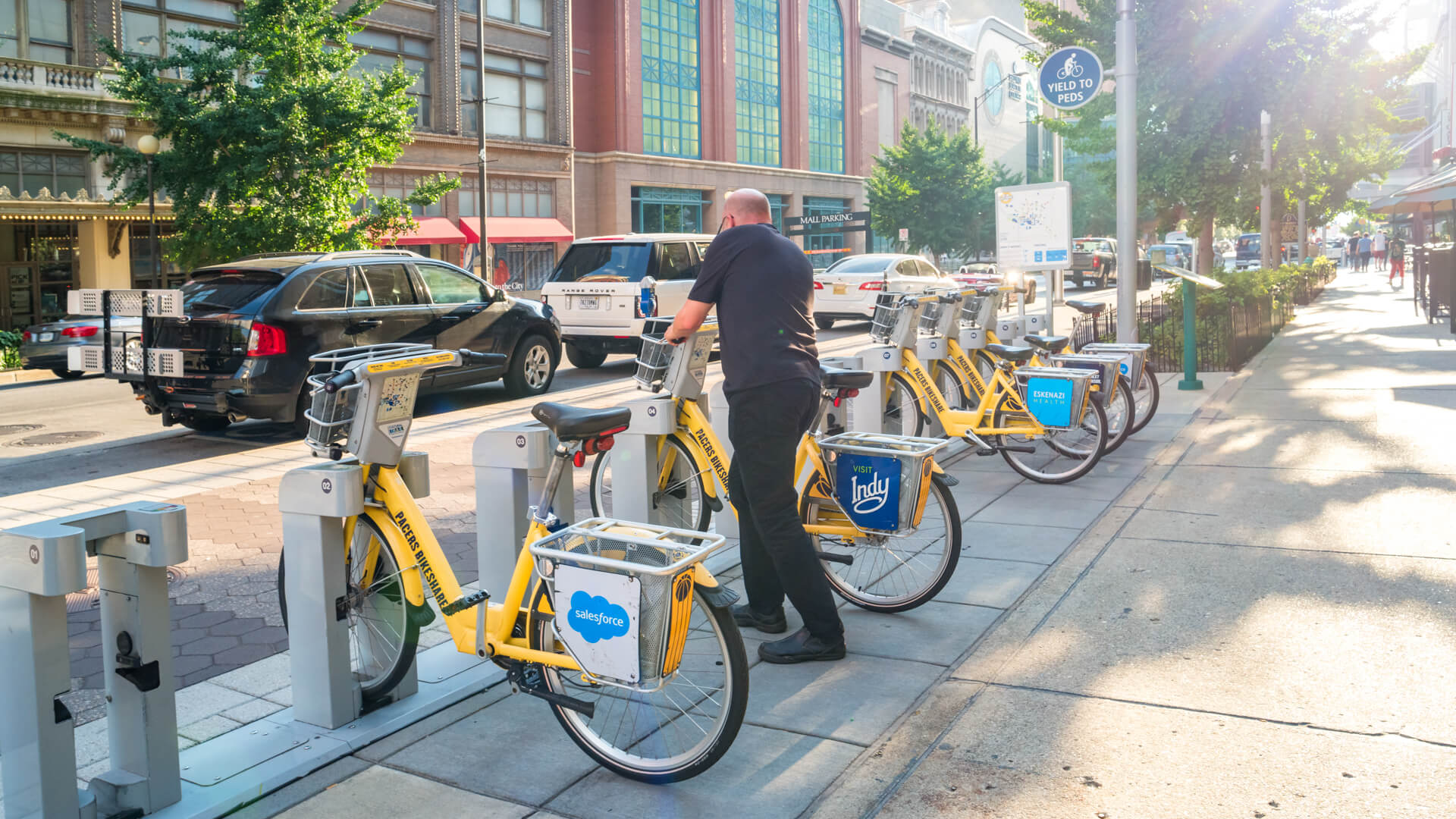 Whether you’re thinking about retiring in Indianapolis or moving there for work, it could be one of the most affordable places to live in. You’ll find 8 miles of off-street biking right near the downtown area which makes it easy to explore the city’s restaurants, shops and other downtown destinations. The city is also home to the Indiana Pacers Bikeshare program where you can pick up one of 250 bikes. More protected bike lanes will appear in the downtown area in the near future, and many locals already ride to work. 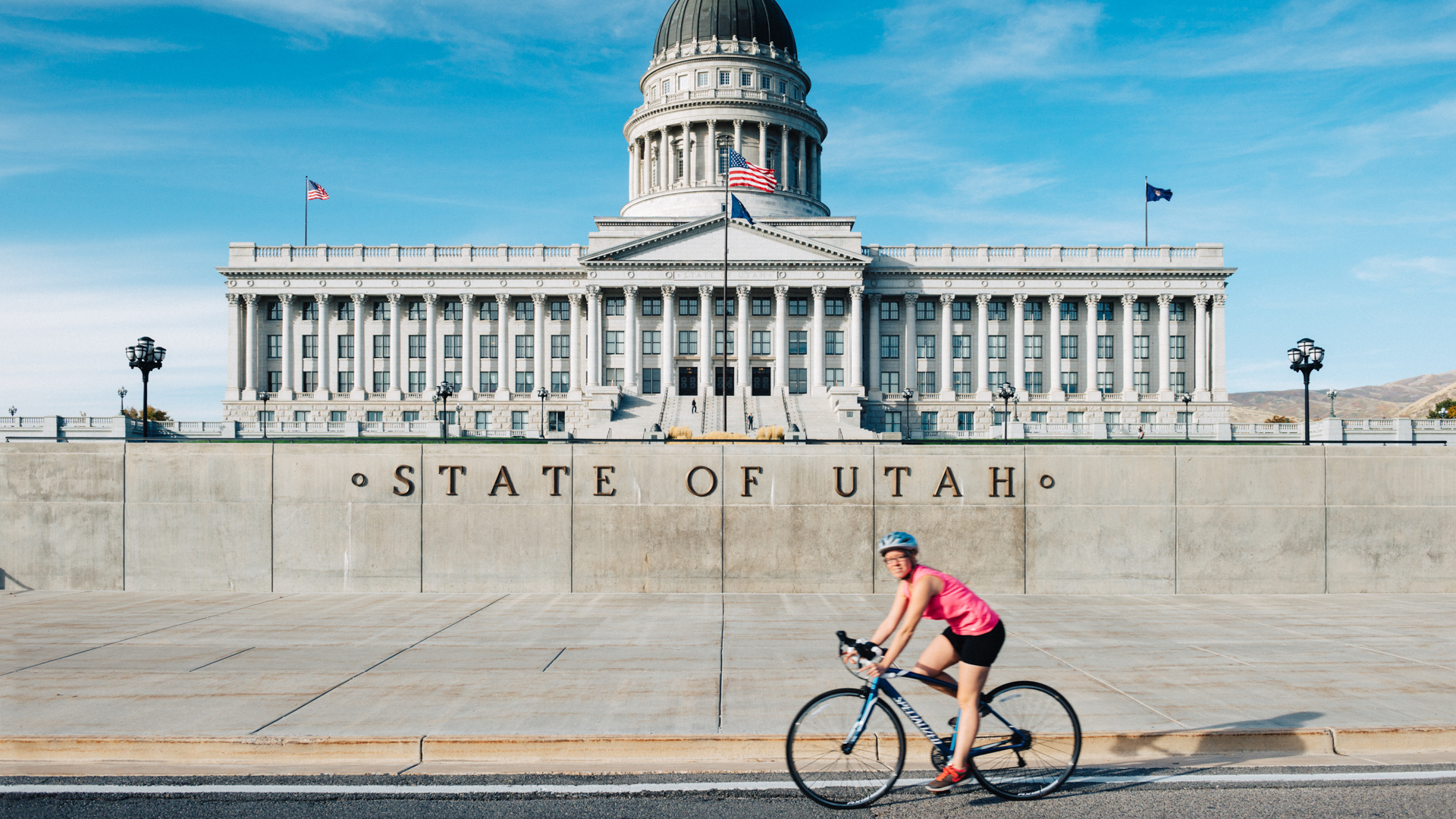 It’s one of the few cities that has invested in maintaining protected intersections, which means cyclists can enjoy safer rides on their commute or biking excursions. You’ll find bike lanes designed with concrete barriers to keep traffic at bay here. The city also has plans to add more bicycle boulevard projects to its roster and expand biking opportunities by adding a bike lane on more roads. 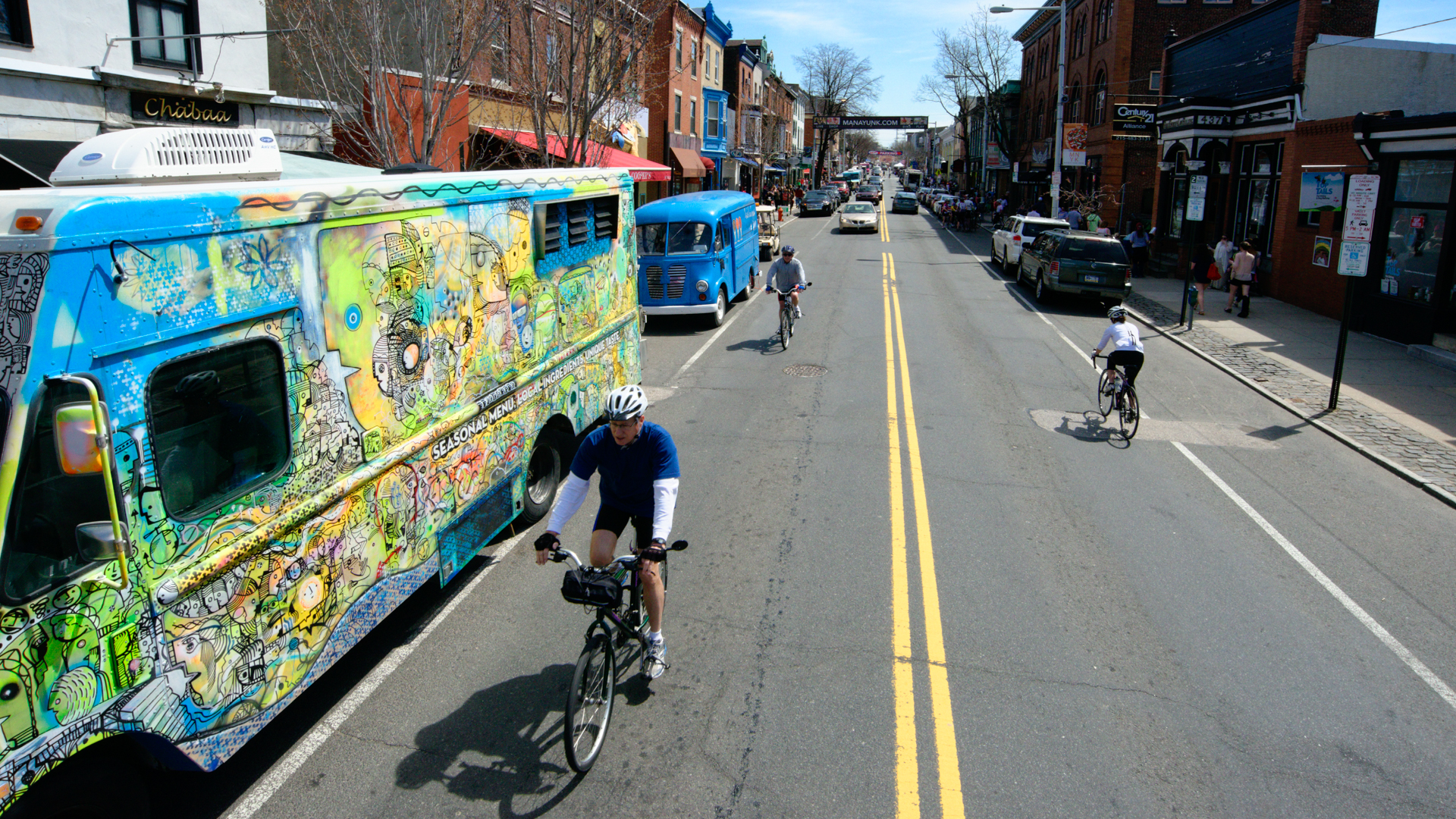 Philadelphia’s robust bike network makes it easy for locals and travelers to explore the downtown area and University of Pennsylvania campus. The Boardwalk is easily accessible via the network of protected bike lanes. The city plans to expand its bike share system and bike lanes within the next few years and also has a safety program in place that uses funds from red light cameras to paint bike lanes on roads and enhance existing lanes for better visibility. 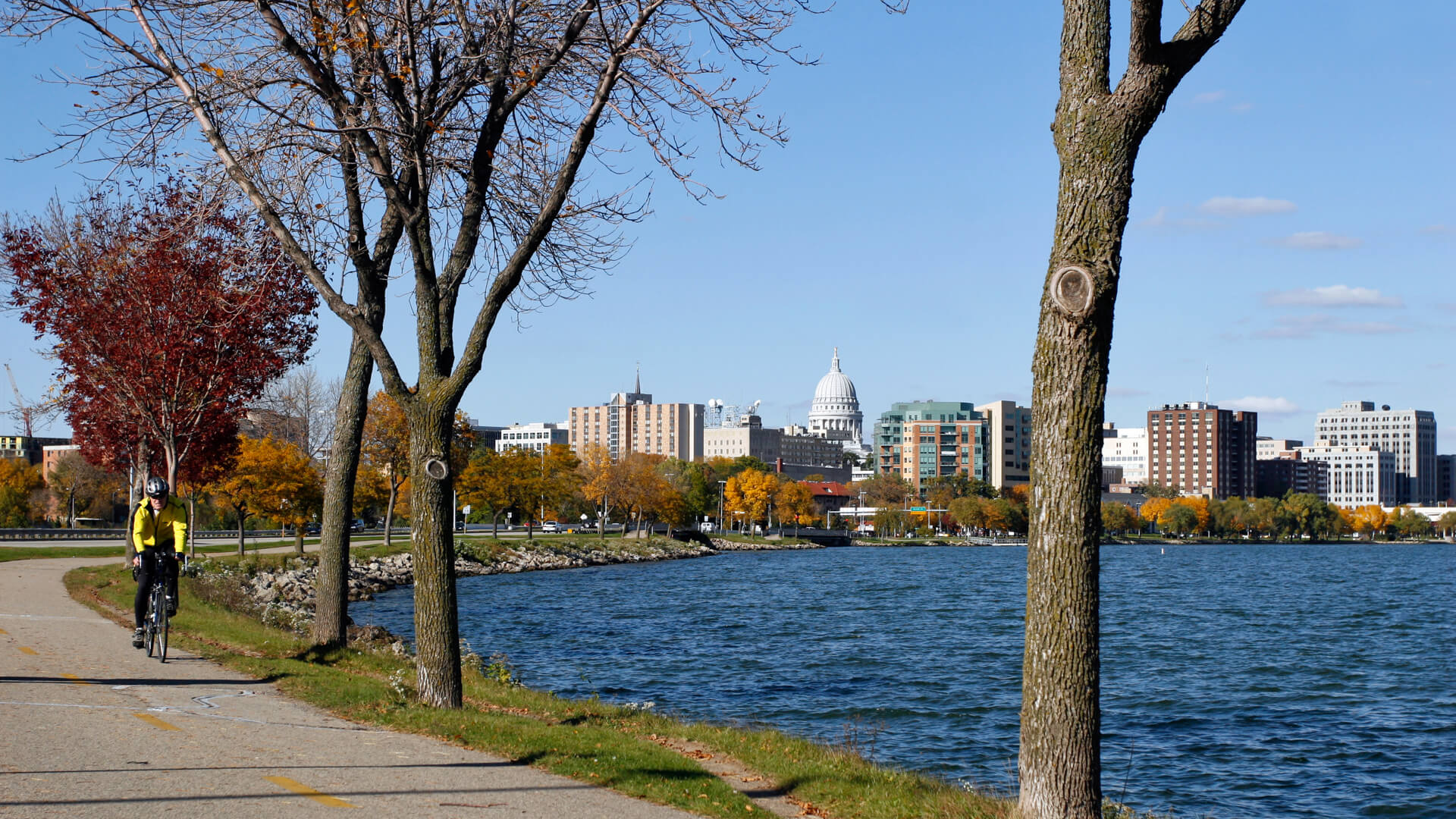 Madison allows cyclists to ride entirely on trails from Madison to Milwaukee on a bike. The capital city also has its own trail that runs through two parks and across a boardwalk to Lake Waubesa. The city’s B-cycle bike share keeps more residents on a bike throughout the day. But the city still has a lot of work to do toward making more roads safer for bikes due to lack of protected bike lanes.

Recommended Read: The Cost of Living Is Quickly Rising in These 10 US Cities 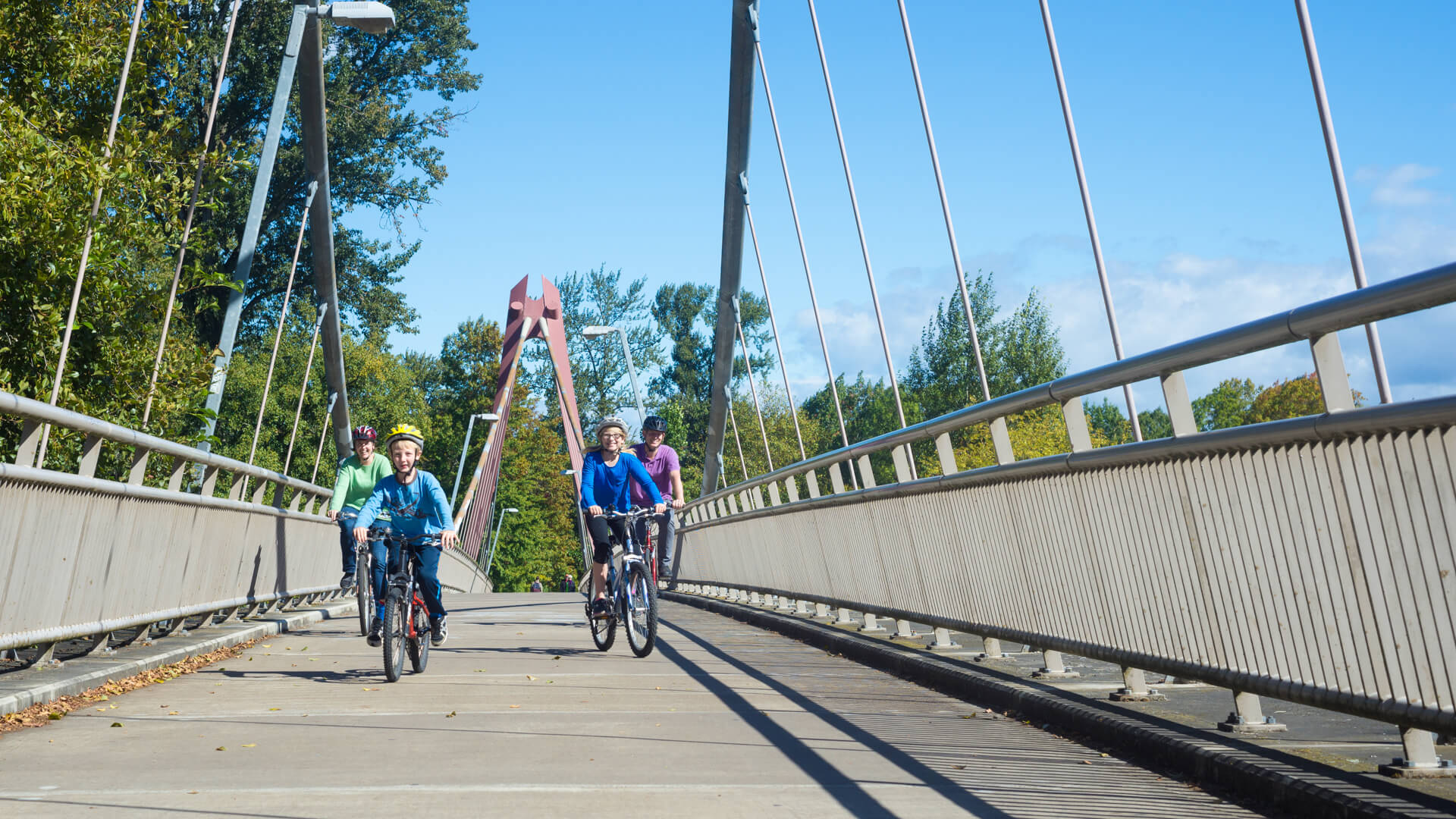 Eugene is heavily invested in upgrading its outdated biking infrastructure by adding more protected bike lanes to its network. The city added two bike lanes to either side of South Willamette Street and also reduced motorist lanes which translates to a safer ride for cyclists. The University of Oregon and Lane Transit District launched the PeaceHealth Rides system in 2018, which allows users to pick up and drop off bicycles for one-way trips within the city at an affordable cost. 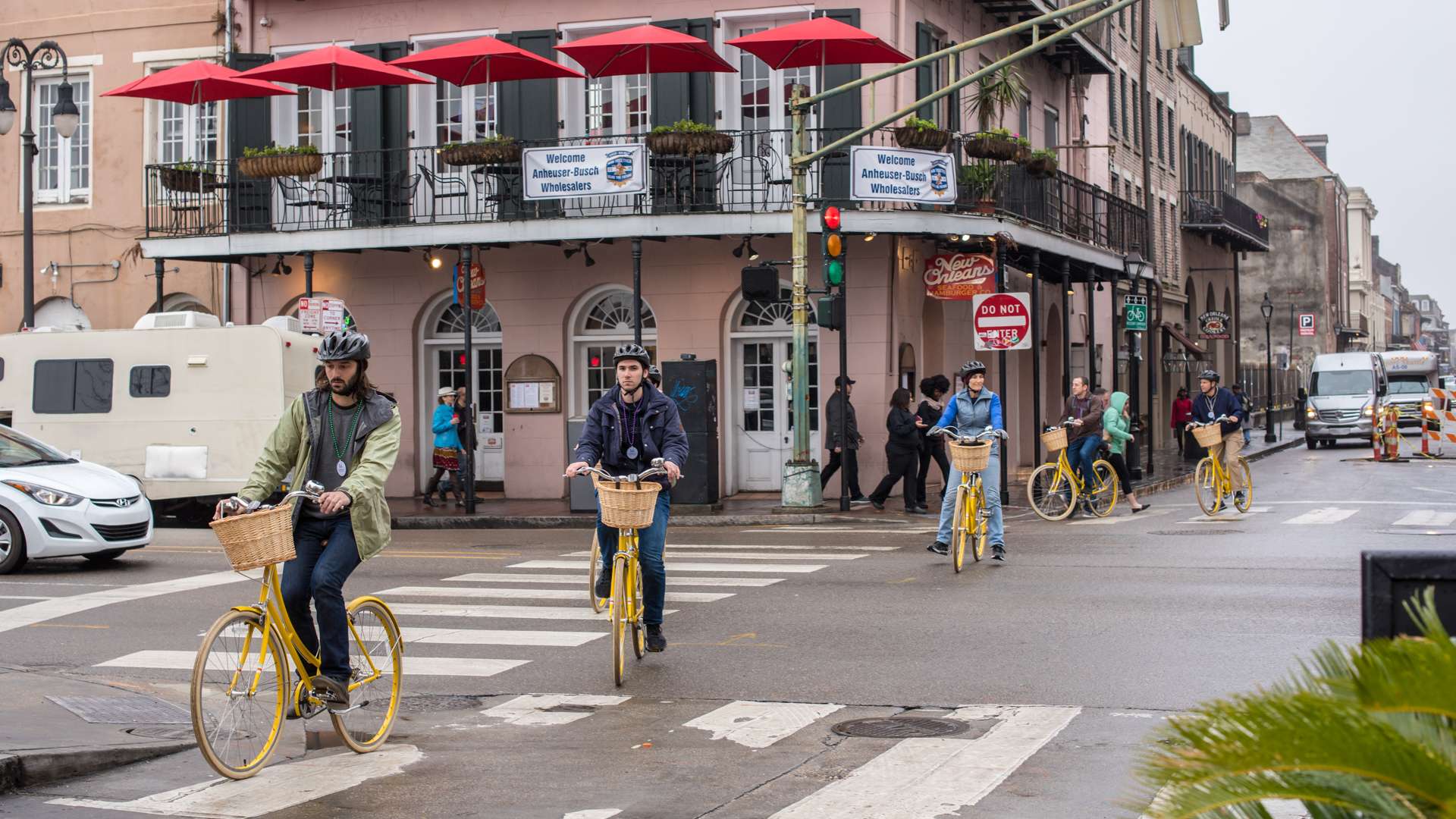 After Hurricane Katrina, the city of New Orleans invested heavily in building roadways that cater to cyclists and also opened parks that have plenty of bikeways. The city is one of the most-biked cities in the country, and many venues host events that encourage street rides through the downtown area. NOLA is one of the few cities where you can join festivals and events with fellow riders. 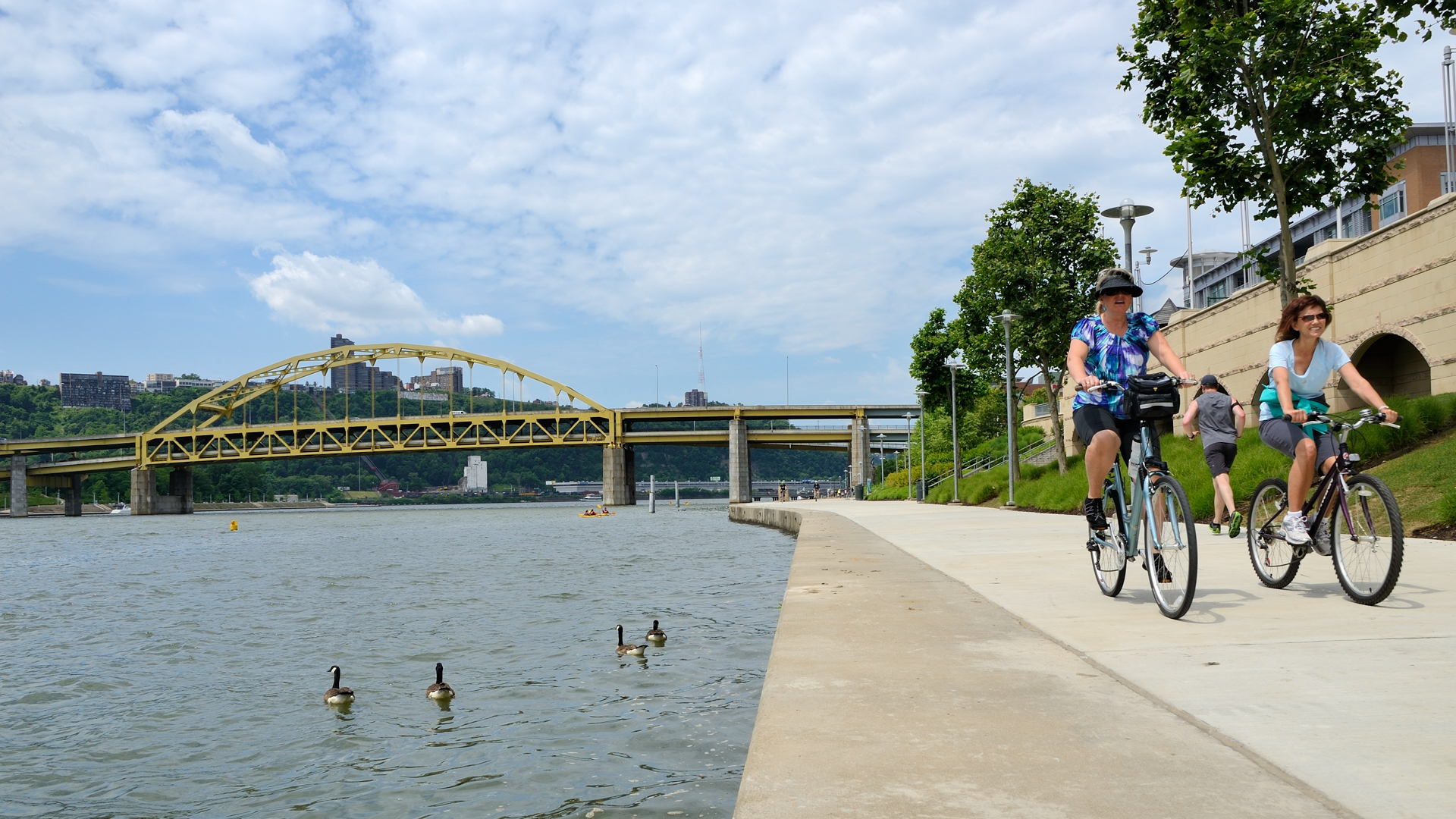 Pittsburgh’s bike share system has been in effect since 2015 and has also installed three protected bike lanes — one of which takes riders to the downtown area from the Strip District. The city celebrates the cycling lifestyle with Bike Fest, and you’ll find dozens of other events across the city that cater to bikers. From the riverfront district to the historic sites around the city, you’ll find dozens of bike trails worth exploring.

Related: The 15 Best and Worst Places to Live If You’re Trying to Save Money 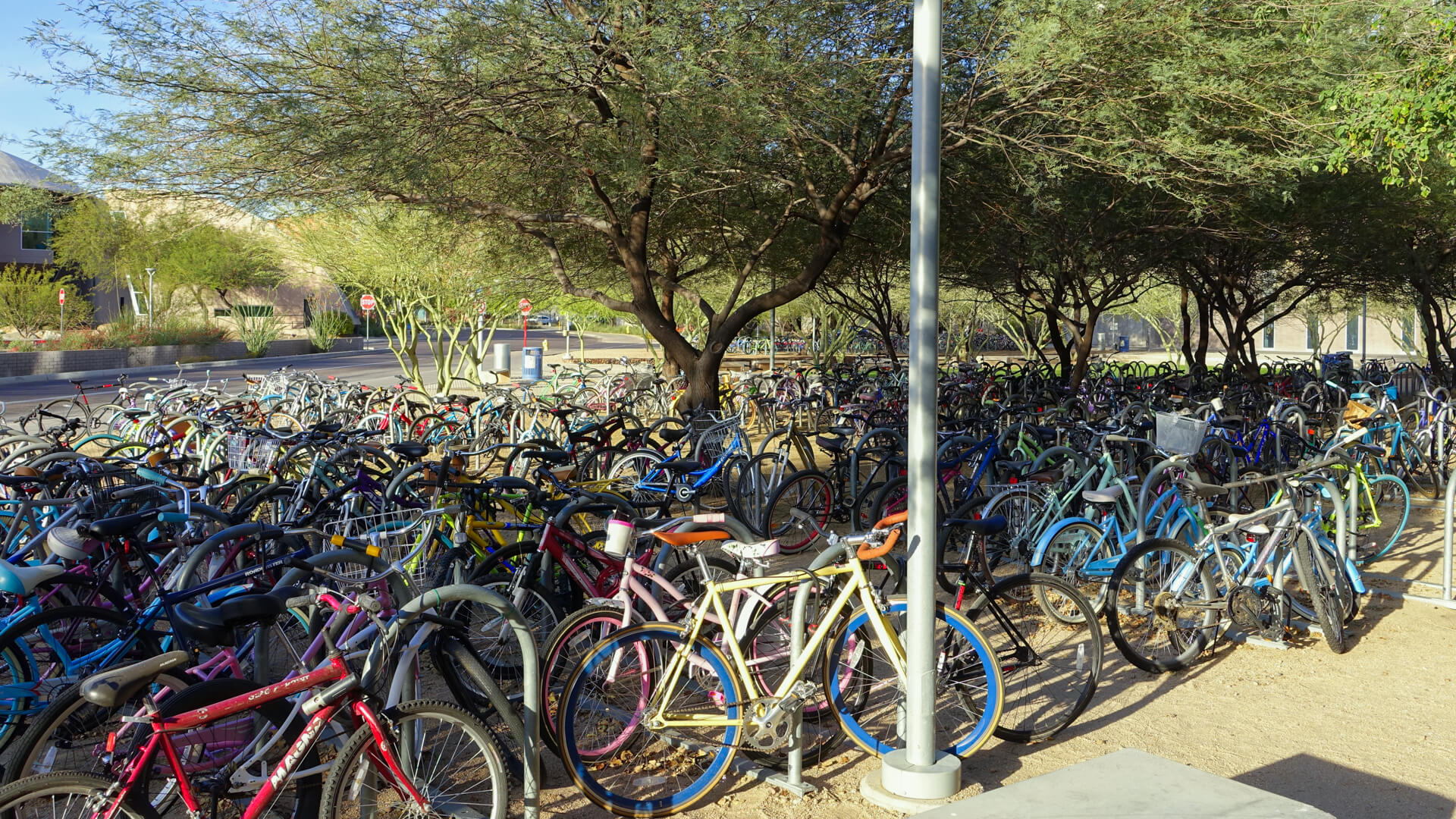 Residents of Tempe can join the Tempe Bicycle Action Group’s cycling events and participate in local rallies. The city boasts a robust bike infrastructure that continues to grow, with provisions for safety at the forefront. Additionally, the city has also made riding a pleasant experience with public art installations around its protected bike lanes. 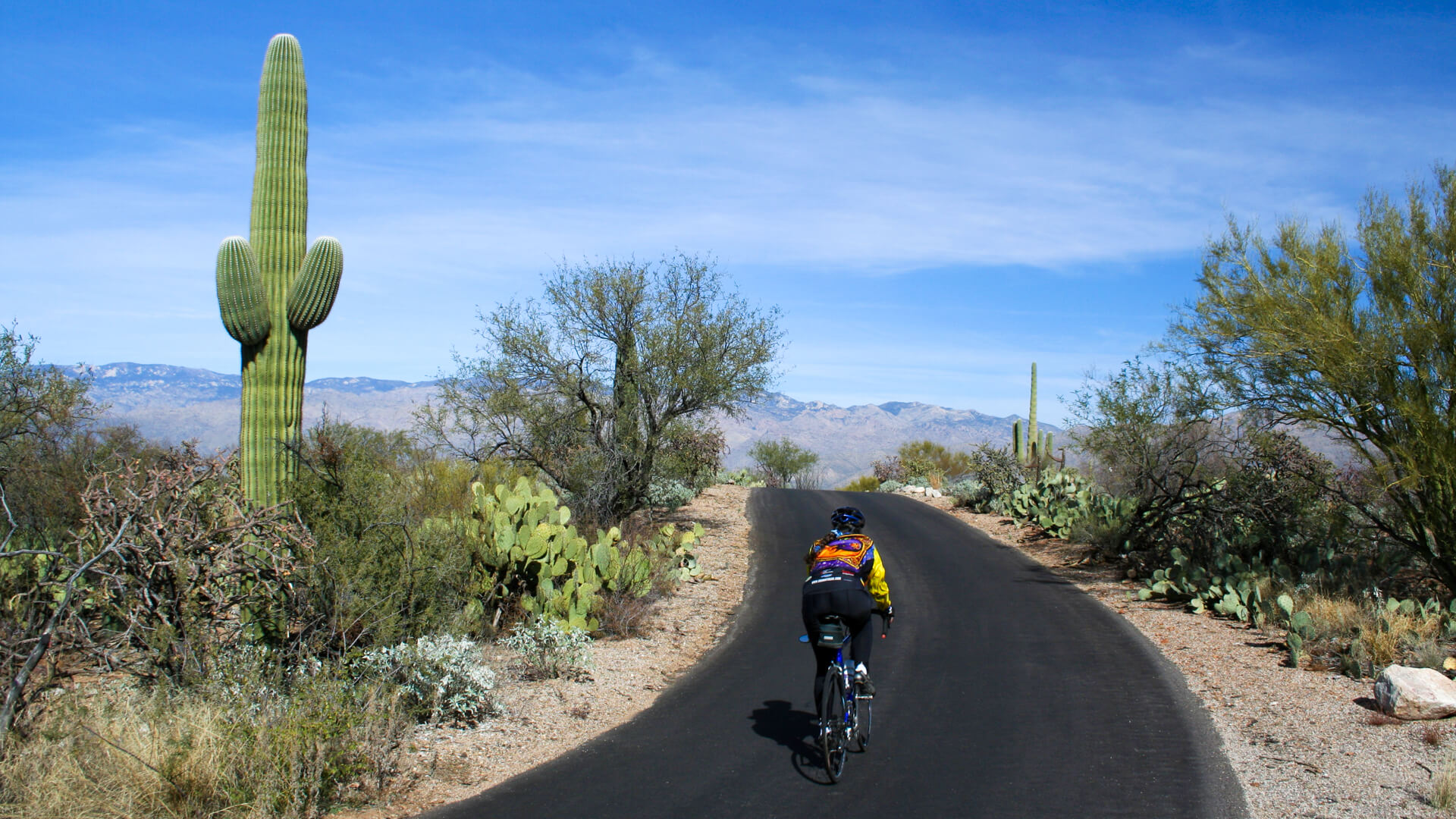 You’ll find hundreds of miles of bike lanes and paved paths around Tucson, a haven for cycling enthusiasts who want an easy commute to work or simply enjoy a biking adventure. The city also hosts a number of open street events and encourages workers to commute to work. A protected bike lane in the downtown area makes for stress-free riding. 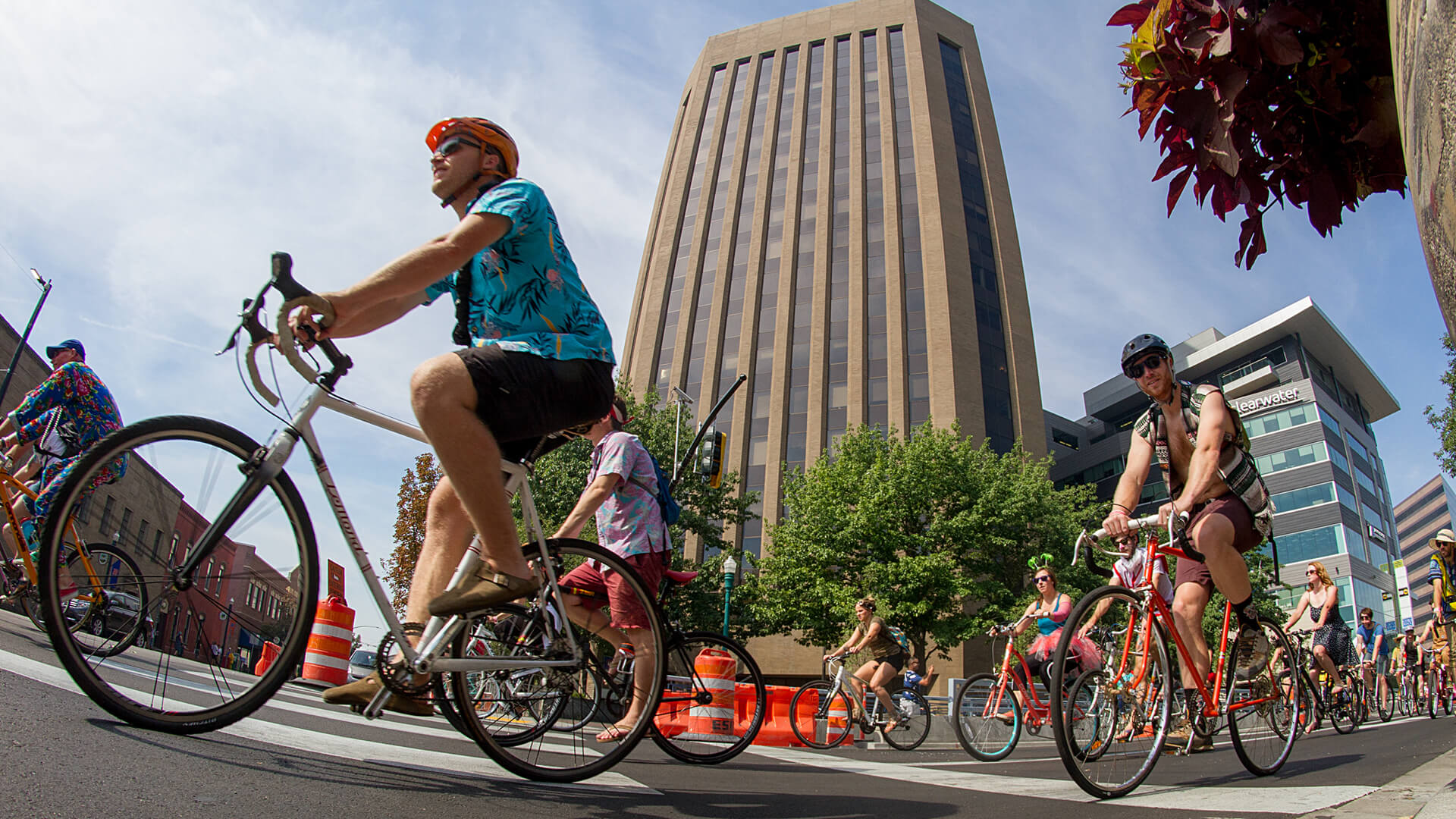 The growing urban districts of Boise demand more bike lanes and the city is working to meet the demand. Several organizations within the city support bicyclists and locals can attend the Pedal 4 the People 10-day festival to show their love for bikes. A growing biking community and affordable cost of living make this one of the most bikeable cities.

Check Out: 20 Cities Where Your Paycheck Goes the Furthest 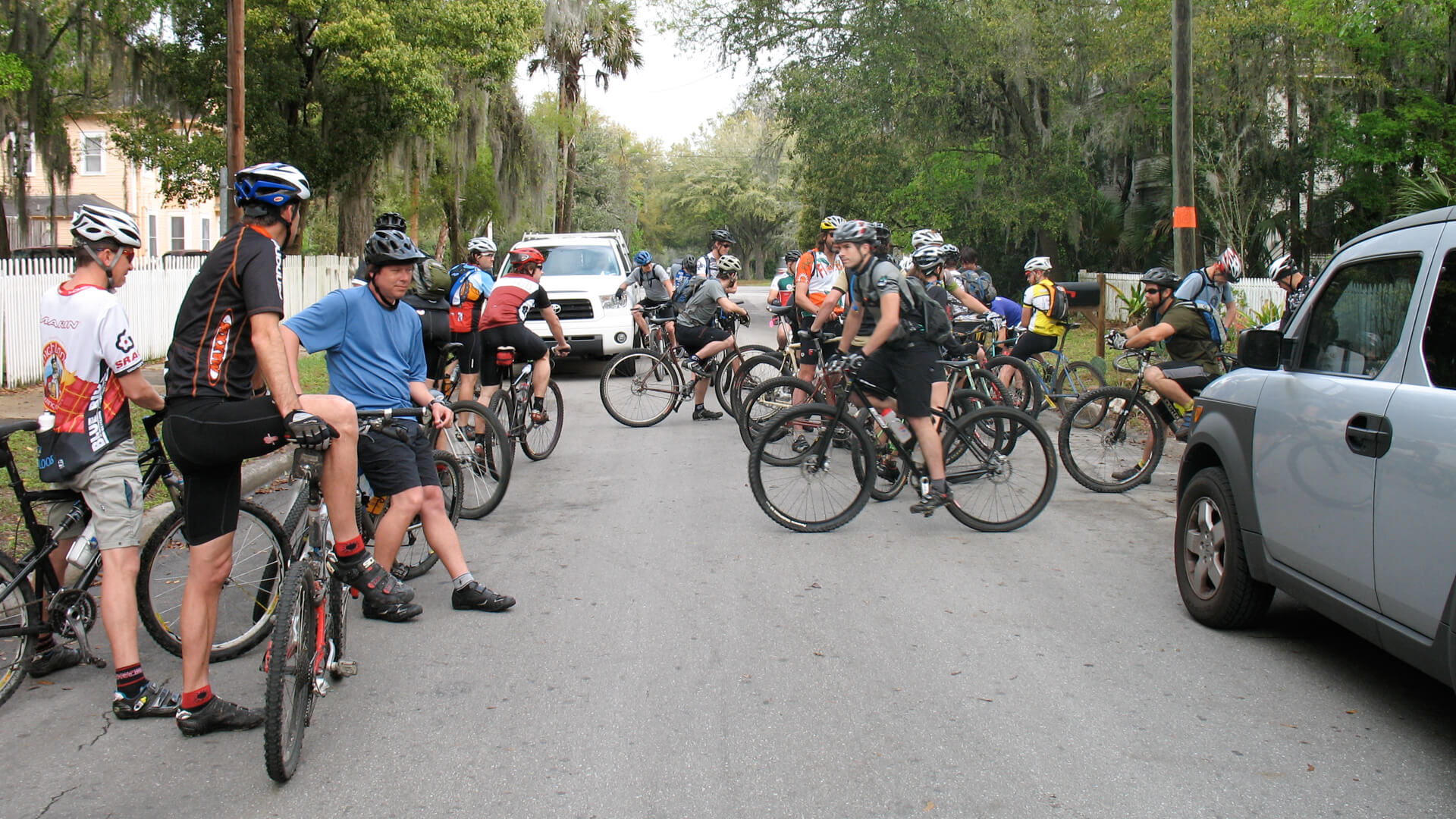 Local advocacy groups like the Gainesville Citizens for Active Transportation have been pushing for more bike-friendly streets, and the city has been working toward making many roadways more suitable for bikers. The city also has a high bike commuter population, and various regional trails connect the city with surrounding communities. Gainesville also offers a bike share rental program to make biking more accessible to all. 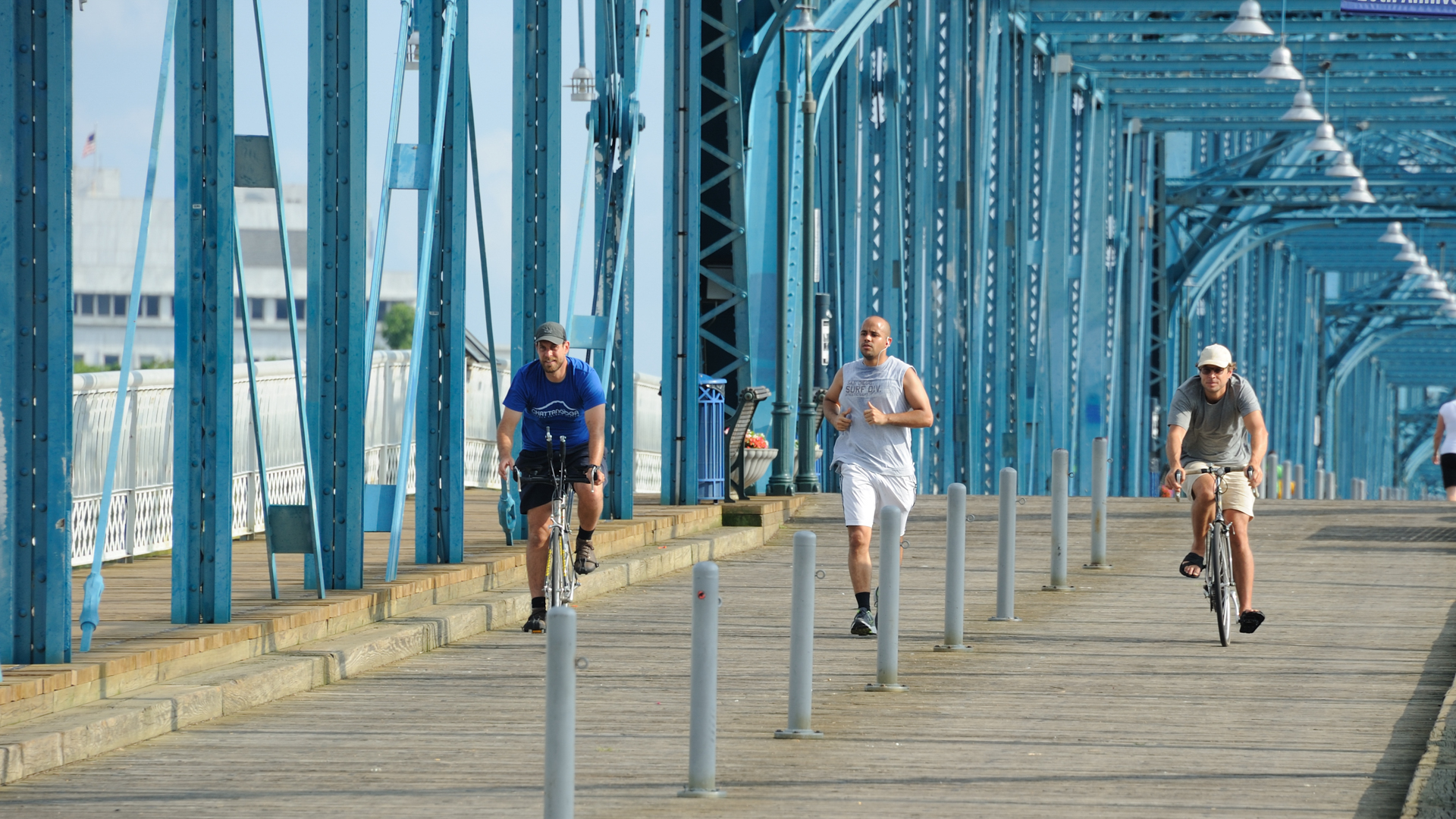 Tennessee is one of the states where you’re least likely to live paycheck to paycheck, and the mountains and rivers of Chattanooga offer plenty of opportunities to go biking and enjoy the beautiful views. The city’s plans to build a modern bike network began in 2014 and is still progressing. Chattanooga is a city that supports both cyclists and biking safety. For example, local businesses offer discounts and gift cards to bikers who commit to a safety training class or commute to work. 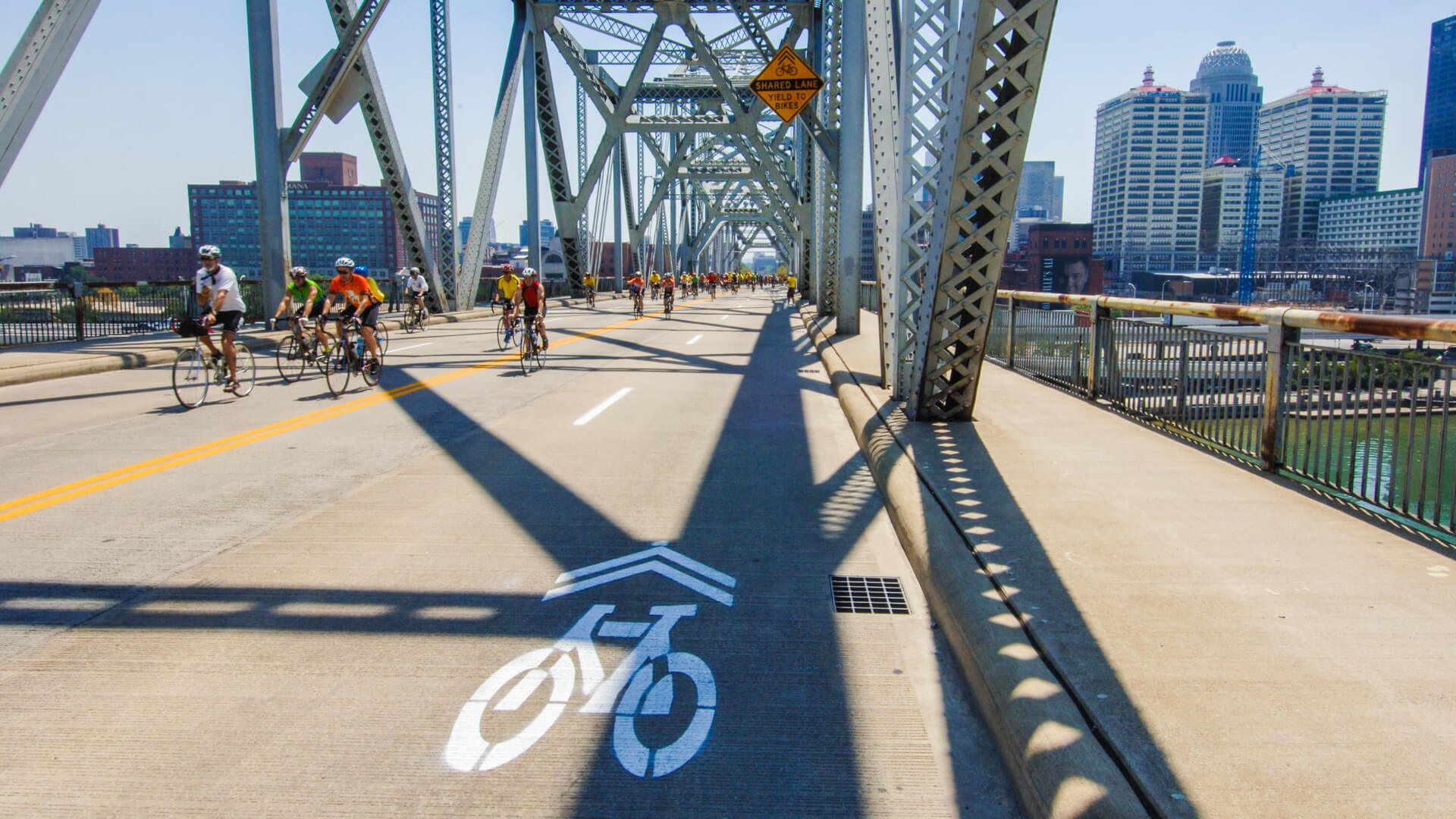 One of the biggest draws to Louisville is its wide bike lanes. The buffered lanes have made navigating the downtown area that much safer and now hundreds of cyclists can commute on bike to work. Mayor Greg Fischer launched the LouVelo bike-share program in 2017 which encourages workers, students, and recreational enthusiasts to borrow a bike instead of driving. 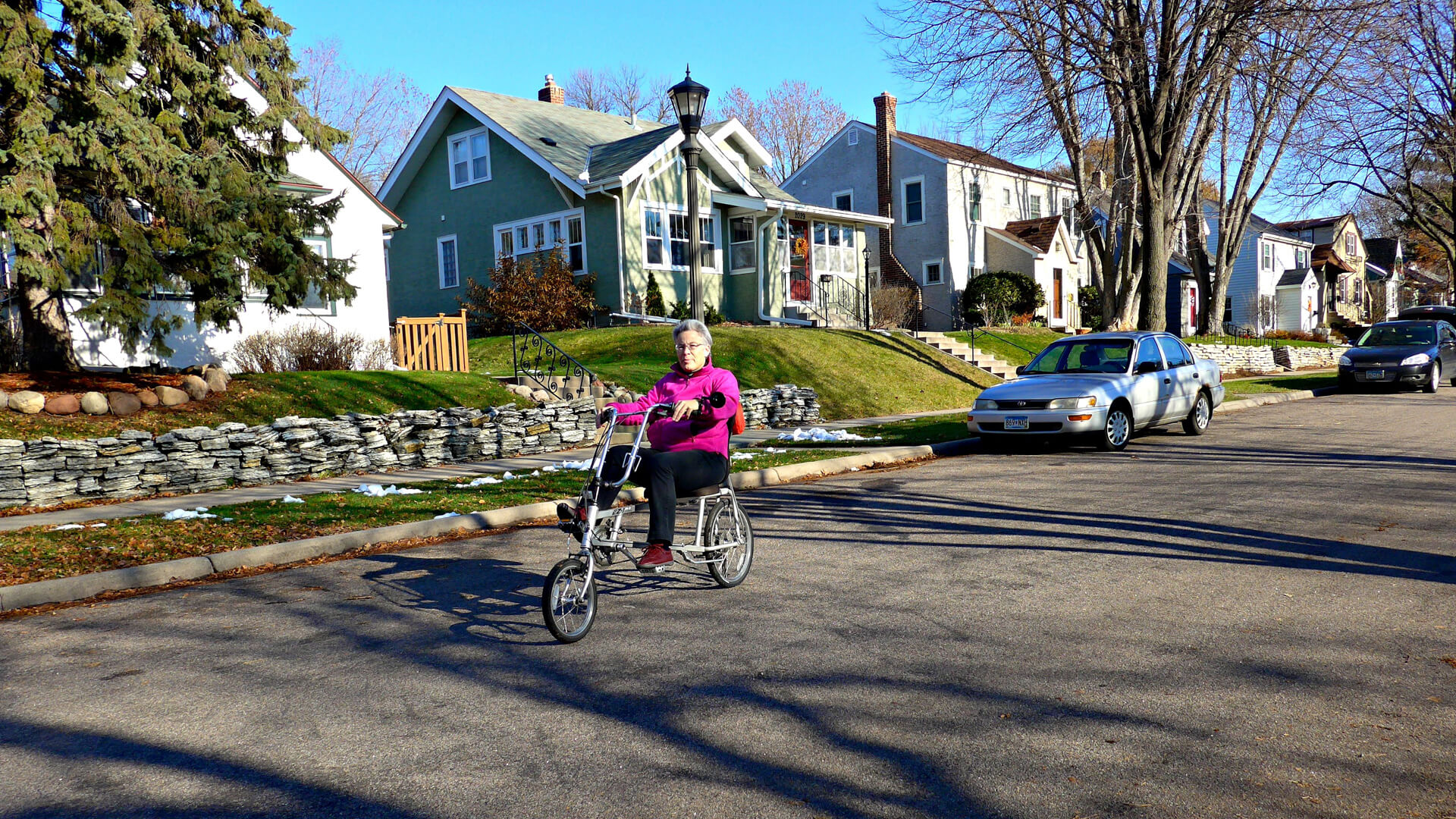 Like its twin city, Minneapolis, St. Paul has connected some of its residential areas with bike lanes. And in 2016, the city began working on two large-scale trail projects, which are still in progress. One part of the project calls for protected bike lanes that run from the waterfront all the way to the Gateway State Trail. For a traffic-free tour of the city, consider joining the annual Saint Paul Classic Bike Tour, which attracts thousands of riders and is a great way to explore the city. 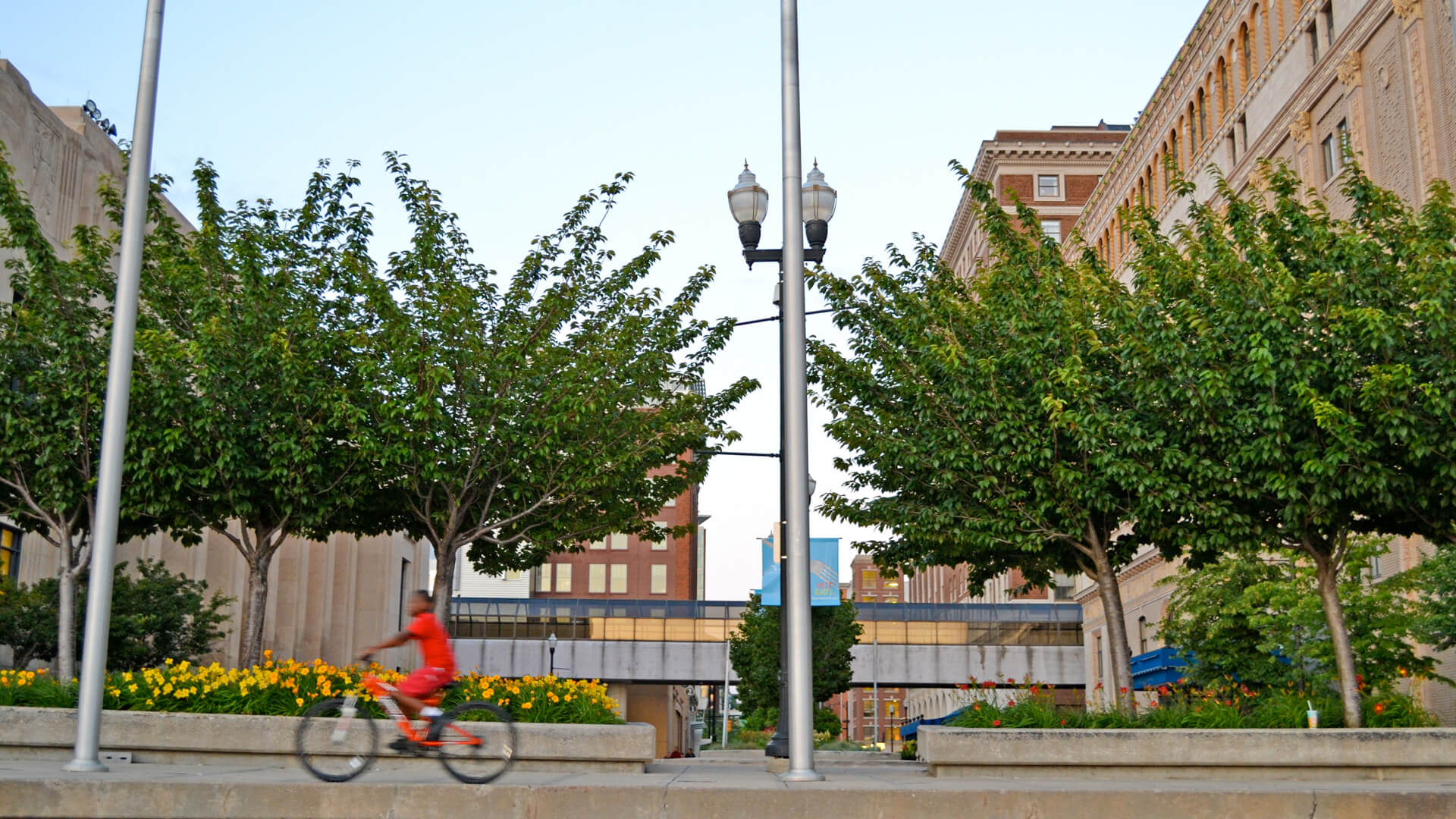 Grand Rapids is home to almost 100 miles of bike lanes, and the city is in full support of cyclists. The cycle track that runs along Riverside Park to the downtown area was repaved to improve rider safety, and bikers can take advantage of amenities including bike lockers and convenient parking shelters during their ride. The surrounding parks alone are home to more than 60 miles of bike-friendly territory, and bikers can attend races and other cycling events throughout the year. 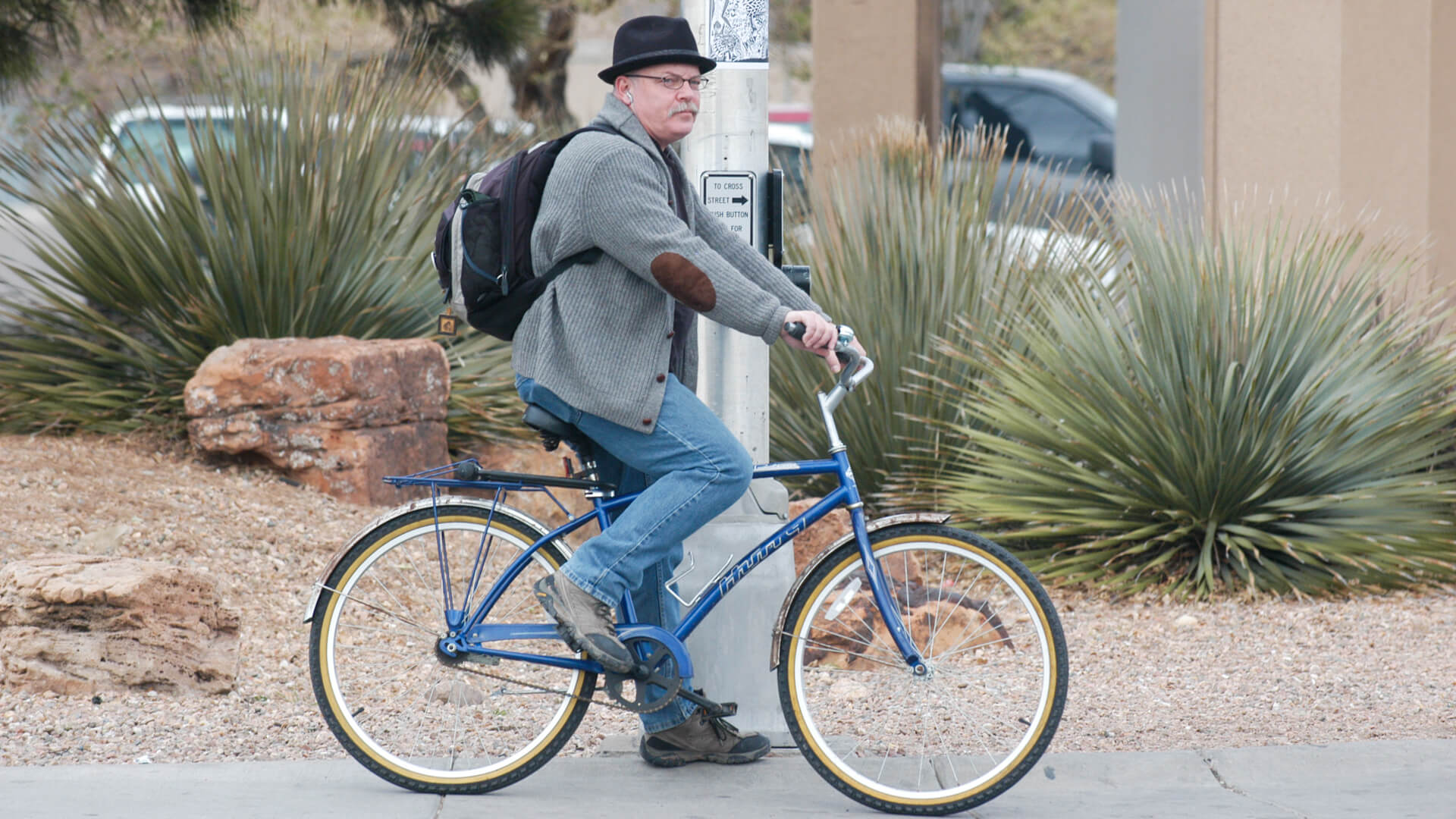 Dozens of miles of biking boulevards and wide bike lanes make Albuquerque one of the most bike-friendly cities. In 2016, the city introduced a plan that would improve bike lane safety with the installation of concrete barriers to prevent motorist accidents and traffic diverters to reduce motorist activity in certain areas. The city also supports Bike to Work Day, an initiative that launched in 2015. 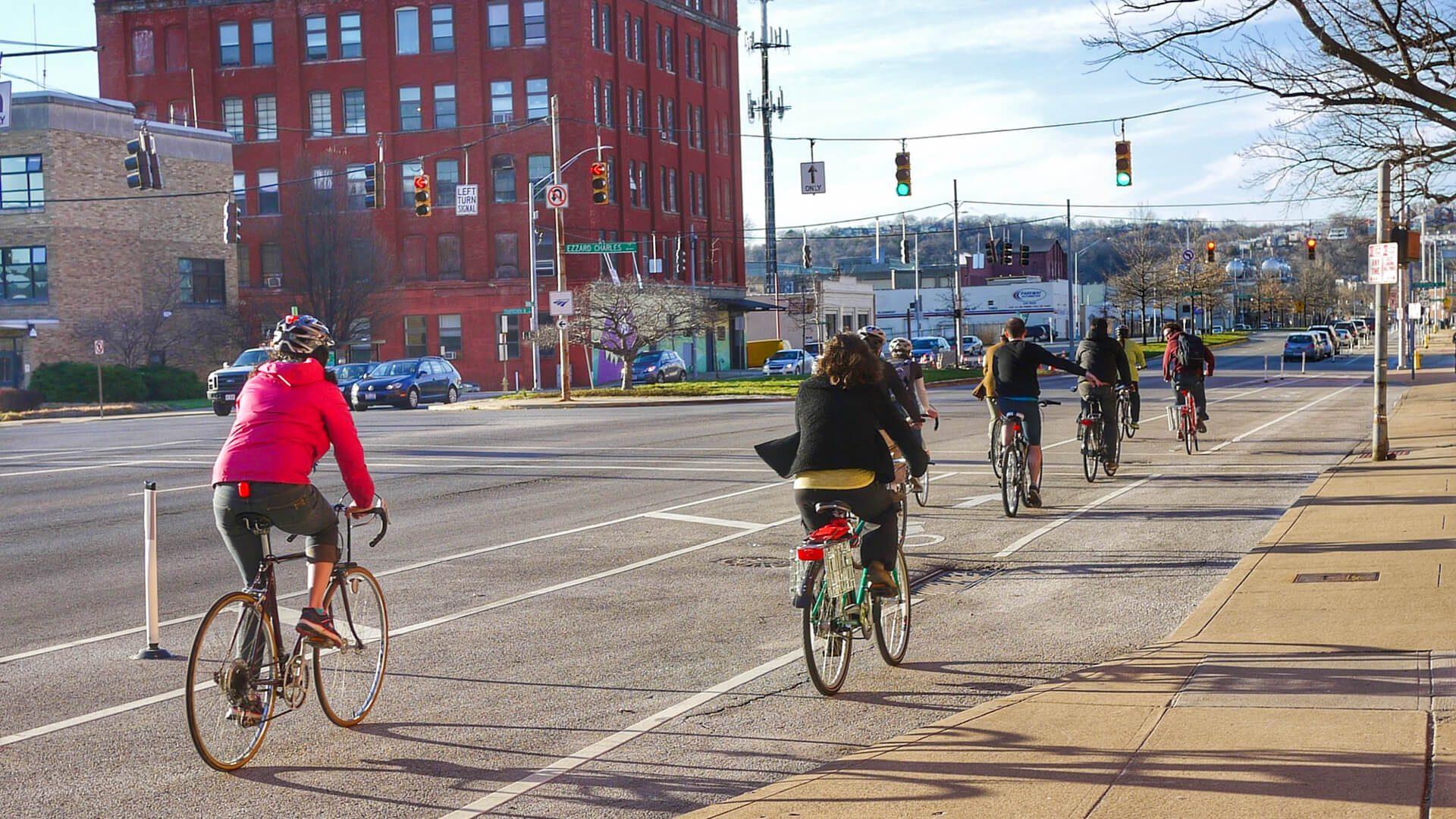 Cincinnati’s Red Bike bike-share system was well-received in 2014 and continues to be one of the most attractive perks of living in the city. Cyclists can access the Central Parkway protected bikeway to get across the city safely, and the city is still slowly working on its progressive bike plan. And for a taste of quirky fun, cyclists can attend the annual Cincinnati Three-Way tournament to compete in bike polo. 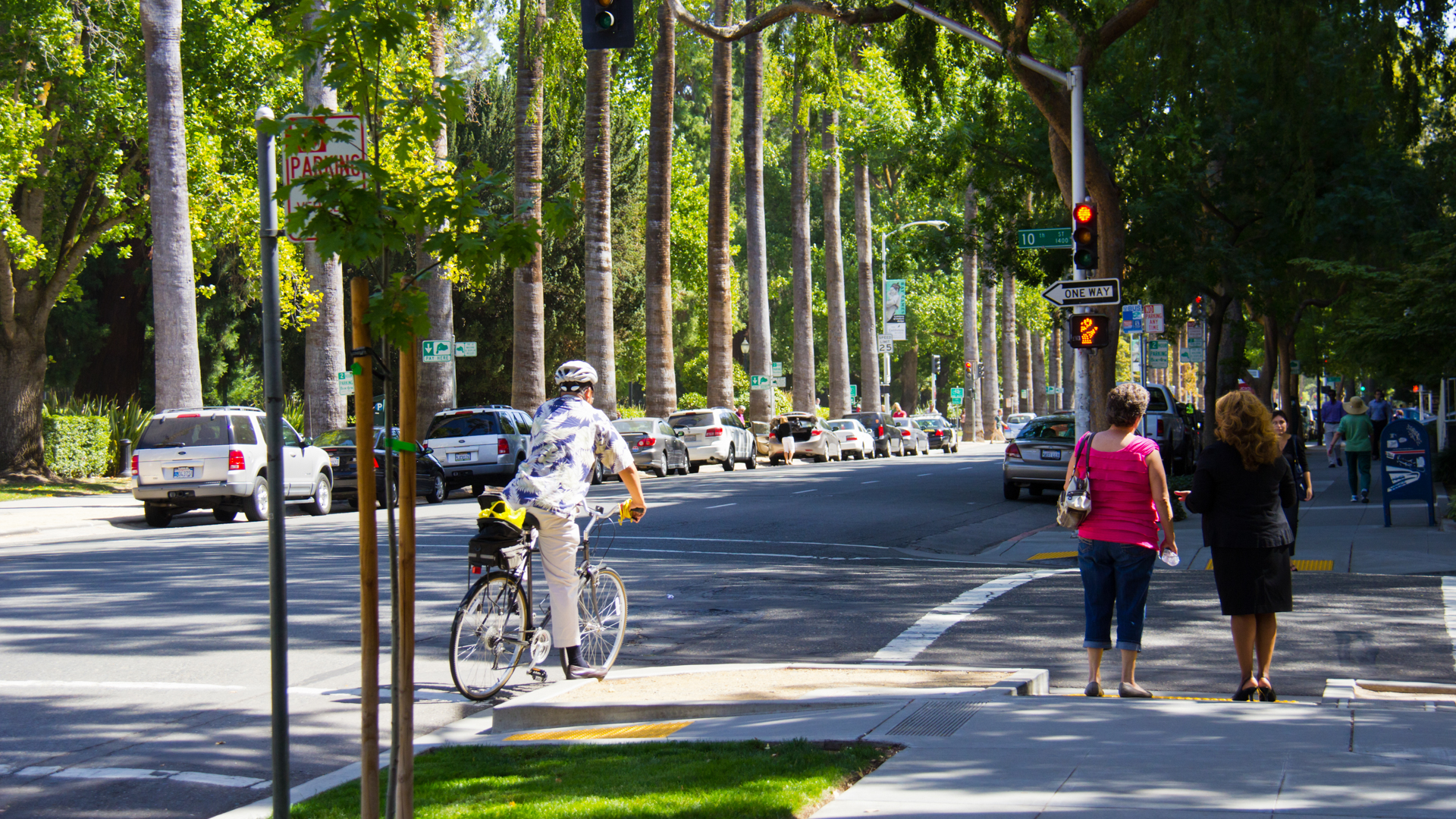 One of the biggest benefits of living in Sacramento is having access to the American River Railway trail. This trail runs 32 miles from the downtown area to Folsom Lake and will take you through miles of parkland and scenic territory. It’s the perfect destination for mountain biking, and the city is working on expanding paved trails in its trail network.

When you’re cutting costs to stay on budget, adopting a biking habit in Sacramento is easy. 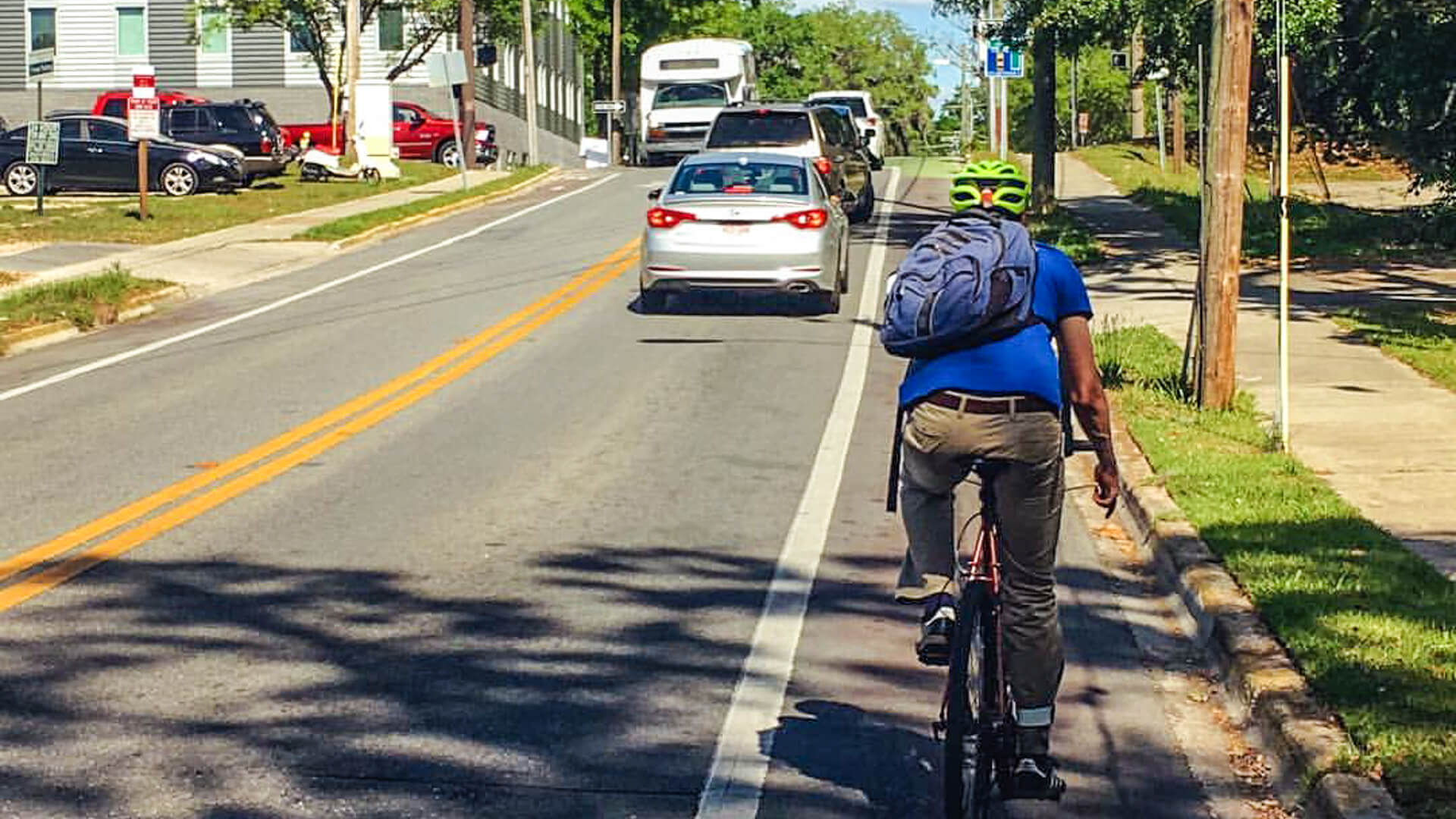 The Tallahassee-St. Marks Historic Railroad State Trail runs 16 miles along the coast and provides both paved and mixed-use bike paths. The city is perfect for mountain biking and road biking, but you’ll also find a few gravel trails around the city for a more challenging ride. Tallahassee has taken steps to increase biker safety by using plastic bollards in bike lanes to protect bikers from motorists. 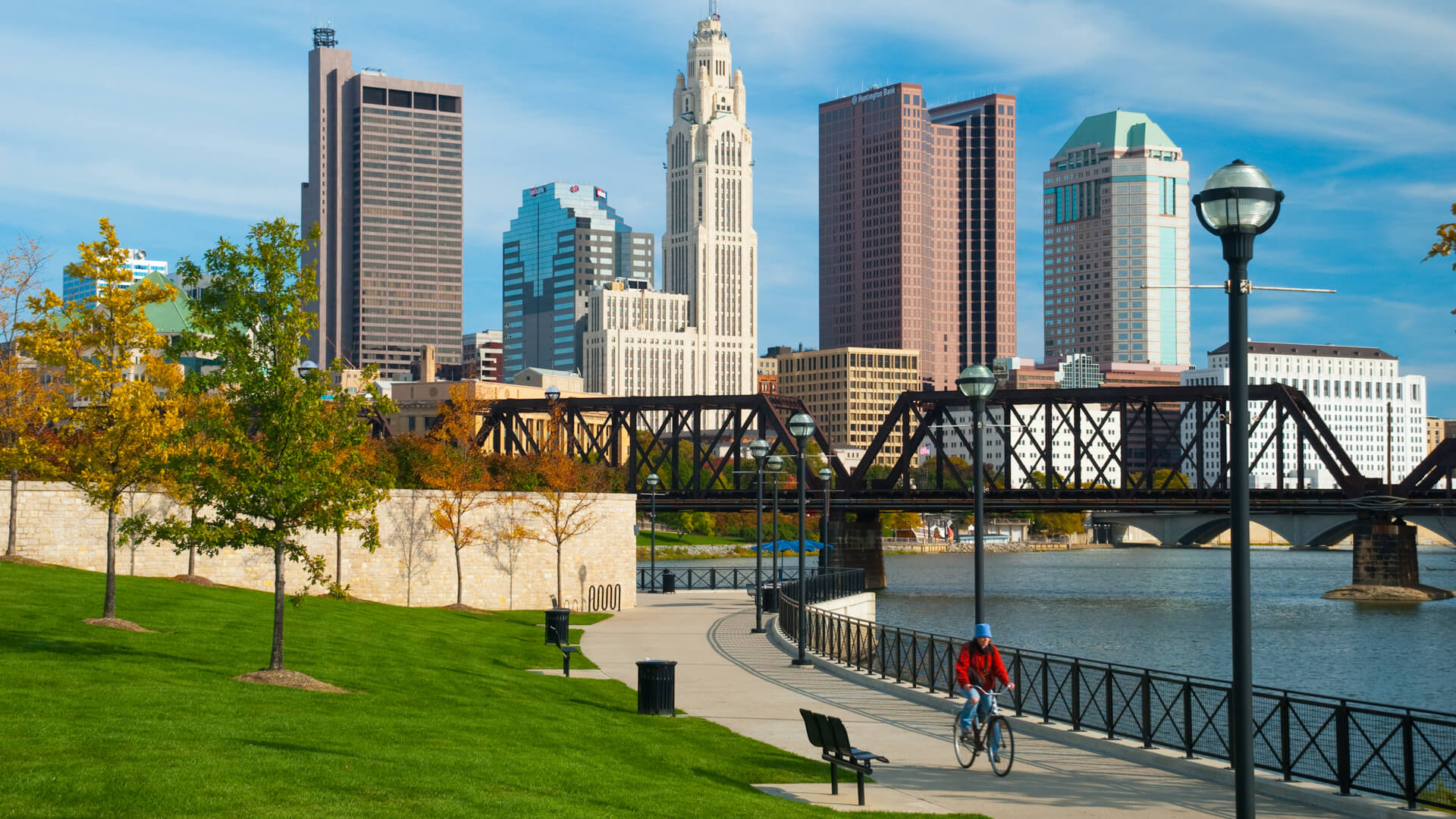 Columbus started its bike-share program in 2013 and also boasts a protected bike lane for cyclists who want to commute to work with peace of mind or just enjoy a leisurely ride. The city’s local advocacy group, Yay! Bikes continues to support riders and advocates using a bike for transportation. It also provides special event bicycle parking with its own bike valet program.

Discover: 11 Cities Where Rent Is Cheap, But Cost of Living Isn’t 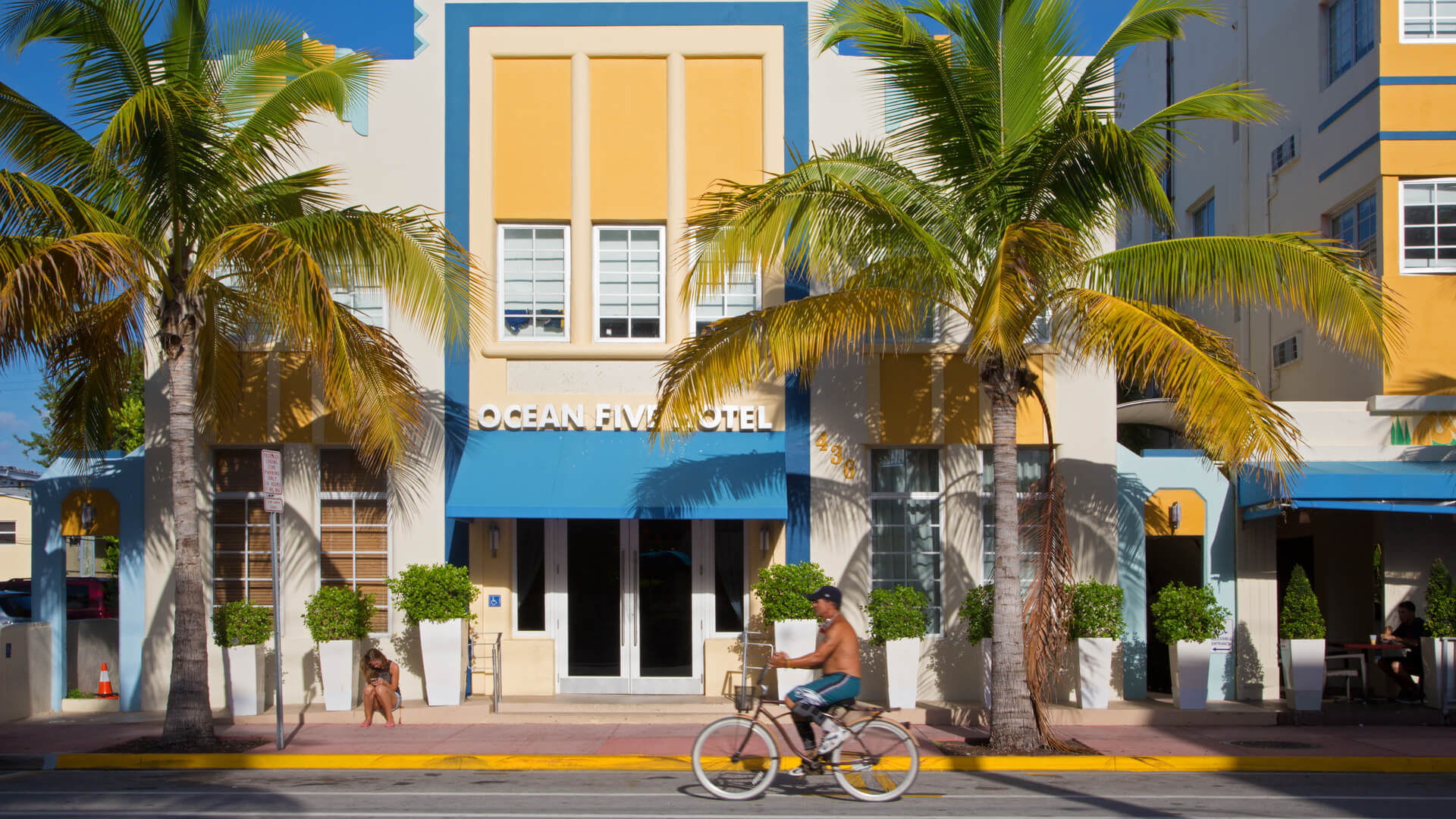 Miami is another city that hosts several bike-friendly events throughout the year. Cyclists can attend Taco Tuesday and Thirsty Thursday rides every held each week and enjoy easy access to the city’s bike network from several major hubs around the city. The city is also working on building a protected bike lane and separate bus lane to make biking safer. 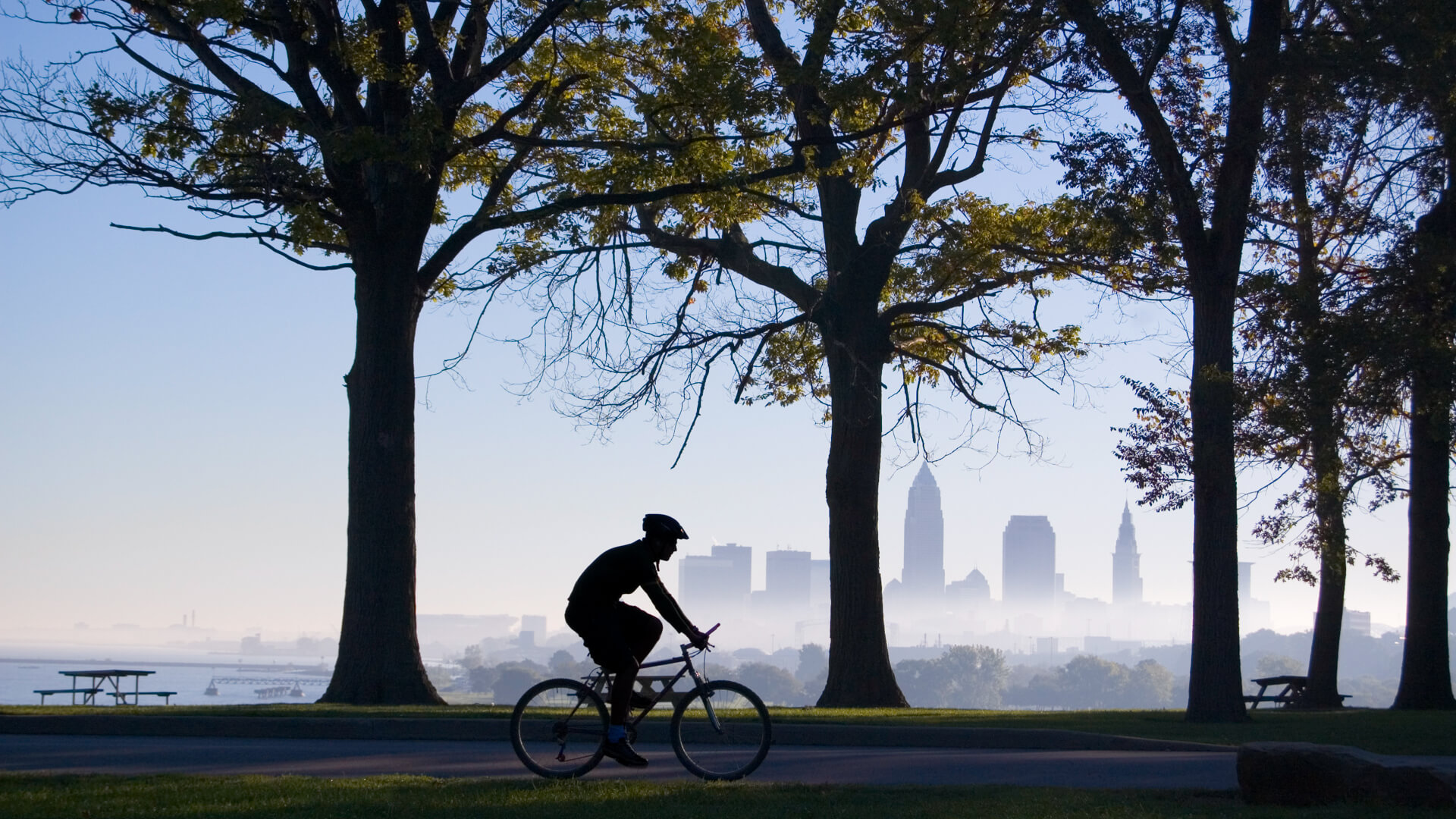 Whether you’re buying or renting a home, you’ll find it relatively affordable to live in Cleveland. Plus, Cleveland’s old streetcar tracks and travel lanes have been converted into bike lanes, which means cyclists have miles of dedicated roads to ride on. The city has even invested in protected bike lanes in the interest of safety. In addition, cyclists can join one of several monthly social rides and themed rides to feed their biking habits. 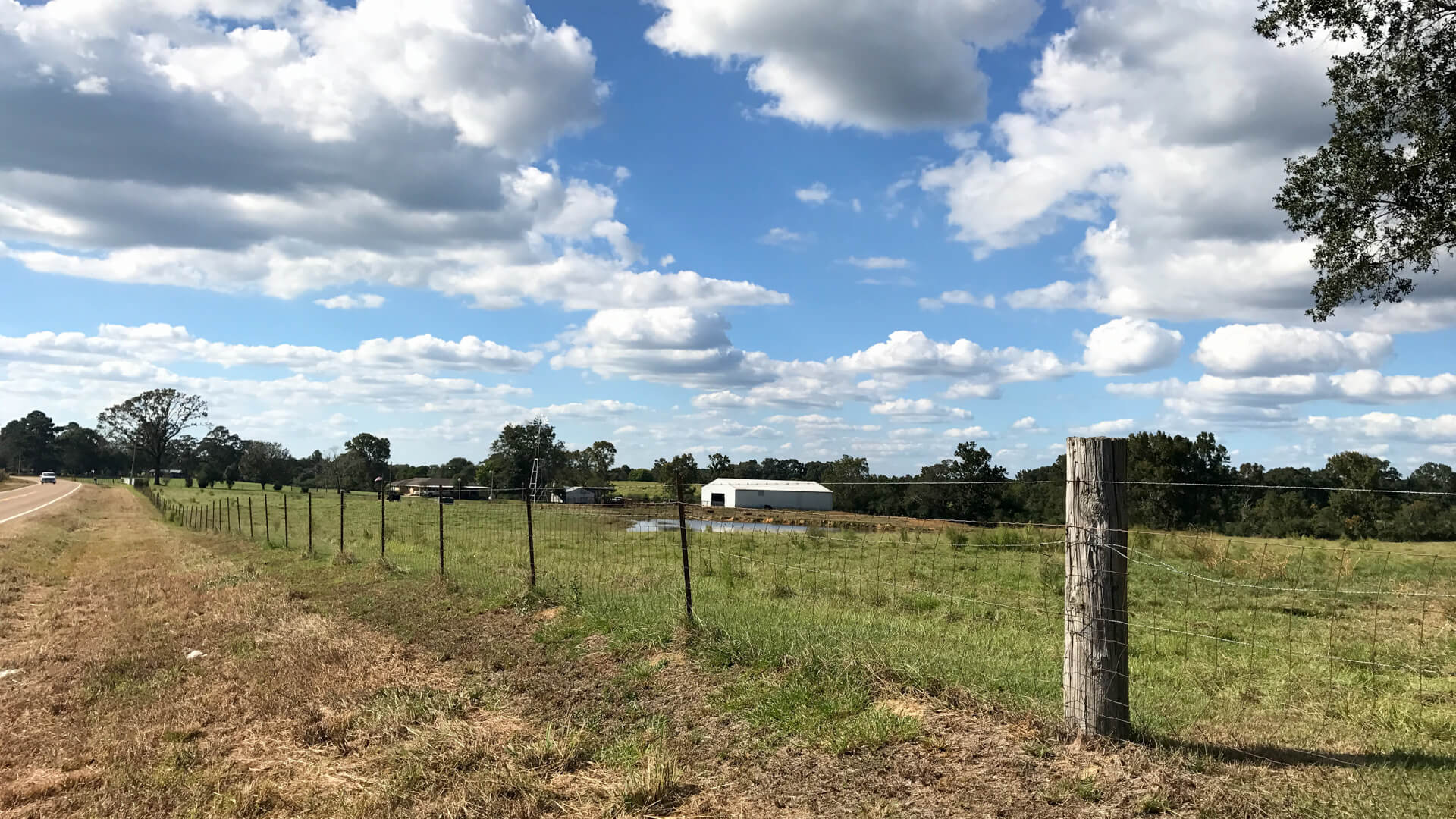 Mountain biking is a popular activity throughout Columbia, and you’ll find several bike trails in city parks and neighborhoods. Getting around The District — 50 blocks downtown — is easier with the safe bike routes that run around the MKT Trail and Bike Boulevard. The District also has over 150 bike racks, and all Columbia transit buses have bike racks available for easy traveling.

Up Next: 50 Cheapest Cities in the World to Live In