The Net Worths of the 2018 Grammy-Nominated Artists, From Jay-Z to Childish Gambino 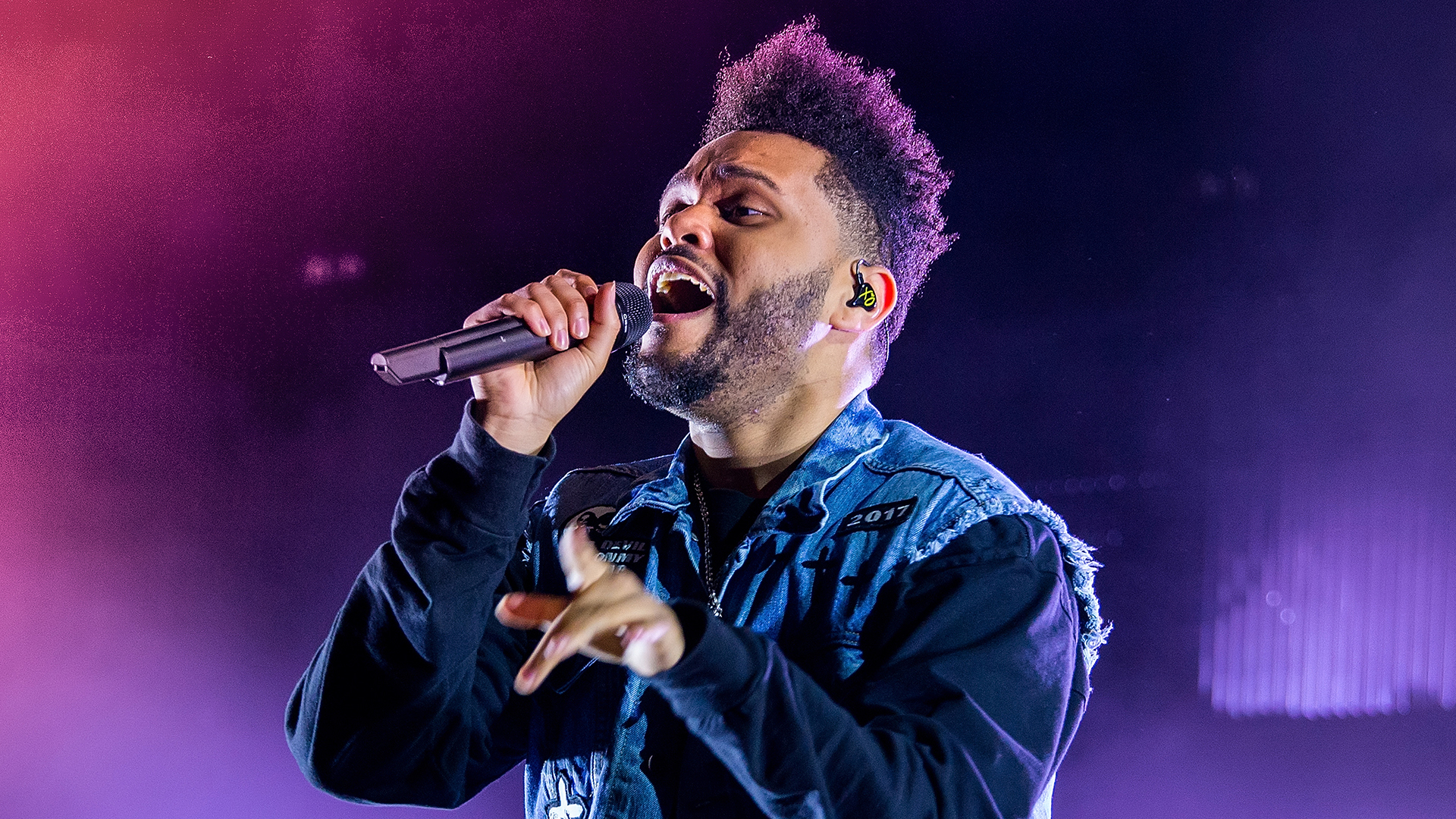 The nomination class for the 60th Annual Grammy Awards will go down as one of the most unique yet. “Despacito” was the first non-English song nominated for Best Record of the Year since former President Dwight D. Eisenhower was in office. In addition to that, Lorde was the online white artist nominated for Best Album of the Year.

In an understatement, 2017 was another big year for the music industry. Here are some of the most eye-popping net worths from this years list of Grammy winners: 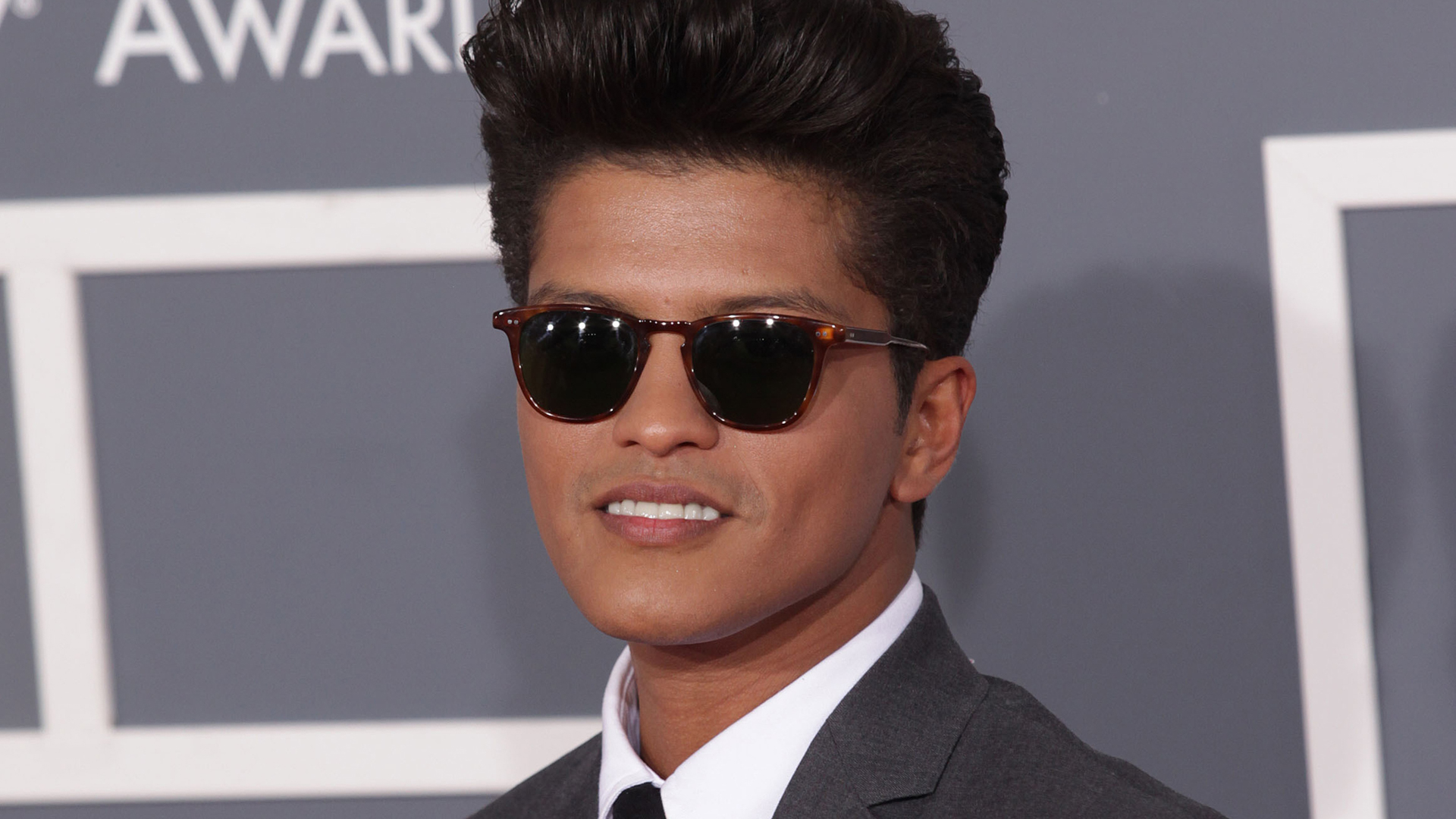 It seemed unlikely that the Grammys would happen without at least one Bruno Mars nomination — and those predictions came true in a big way. The R&B crooner cleaned up, netting himself six nominations — behind only Jay-Z and Kendrick Lamar for most nominations in 2018. Released in Nov. 2016, his latest album “24K Magic” reached 2 million sales in July 2017, according to the RIAA. Performed by Mars at the 59th Annual Grammy Awards, the record’s Smash Hit, “That’s What I Like,” spent 20 weeks in the No. 1 spot on the Billboard Hot R&B Songs chart, tying the record for longest tenure with Drake’s “One Dance” and The Weeknd’s “Starboy.” 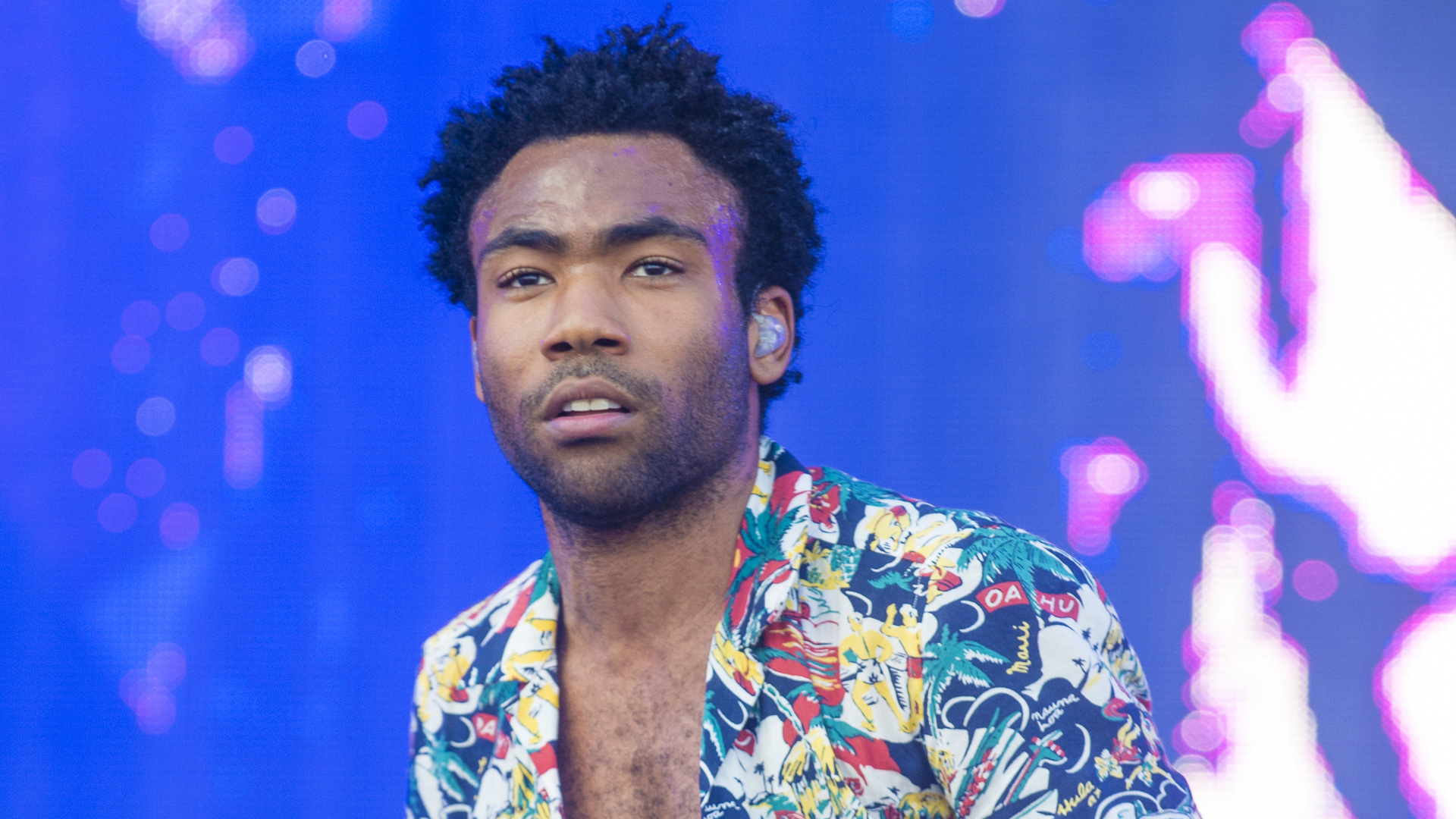 Childish Gambino — the musical alter-ego of actor and comedian Donald Glover — scored nominations in many of the top spots in this year’s Grammys. The hip-hop artist found himself with nominations for Record of the Year and Album of the Year, among others. When he’s not making music, Glover is busy working on his other masterpiece, FX’s hit series, “Atlanta.” 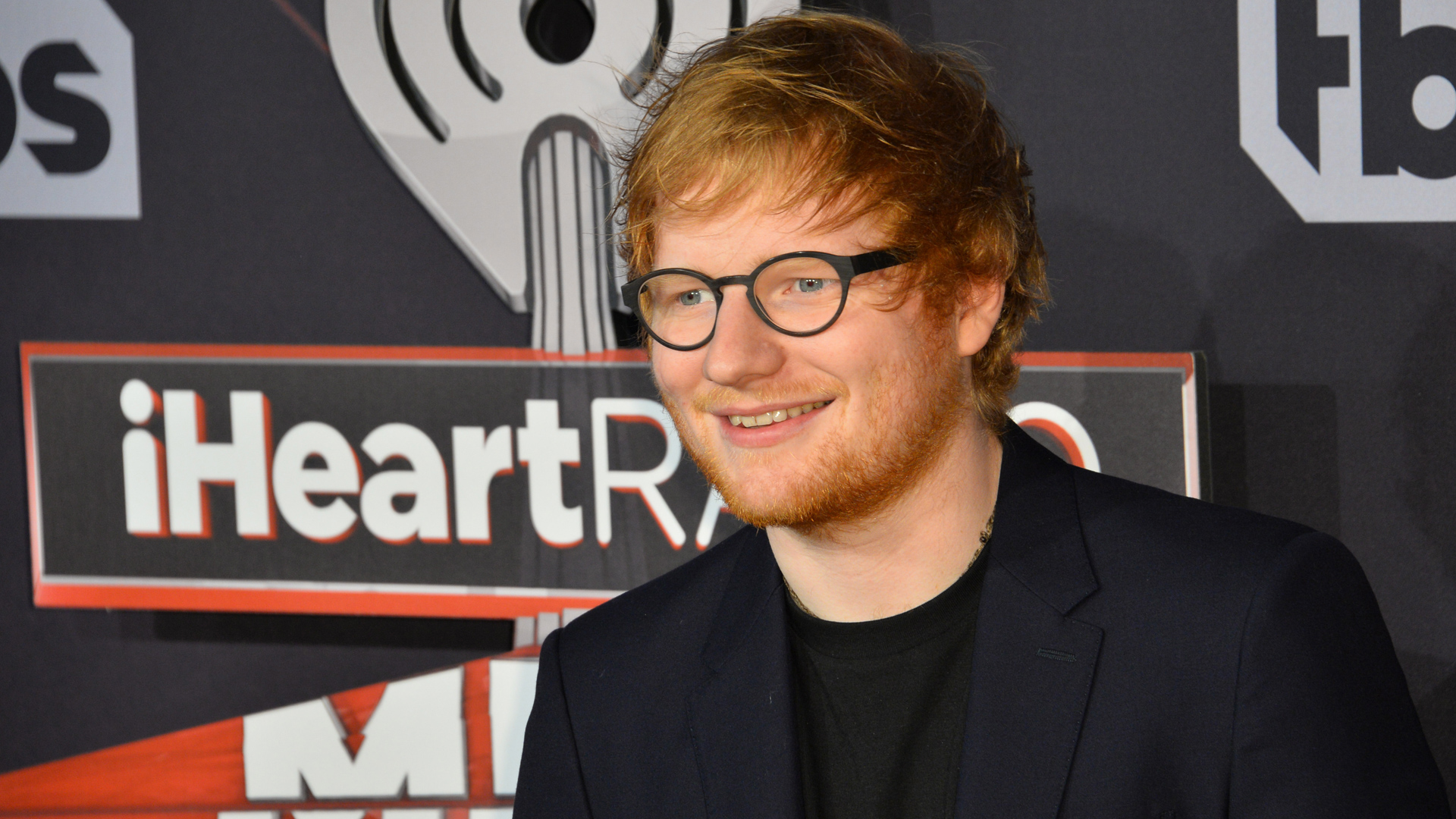 Released in March 2017, “Divide” has been a smash success, with more than 2 million copies sold to date. The album’s mega-popular song “Shape of You,” debuted at No. 1 on the Billboard Hot 100. In September 2017, Billboard revealed the song had the second-longest reign at No. 1 in the history of its Adult Contemporary radio airplay chart. More than 7 million digital copies of “Shape of You” have been sold, according to the Recording Industry Association of America (RCIA).

Everything Has Changed: 15 Unbelievable Ways Taylor Swift Has Given Back to Fans 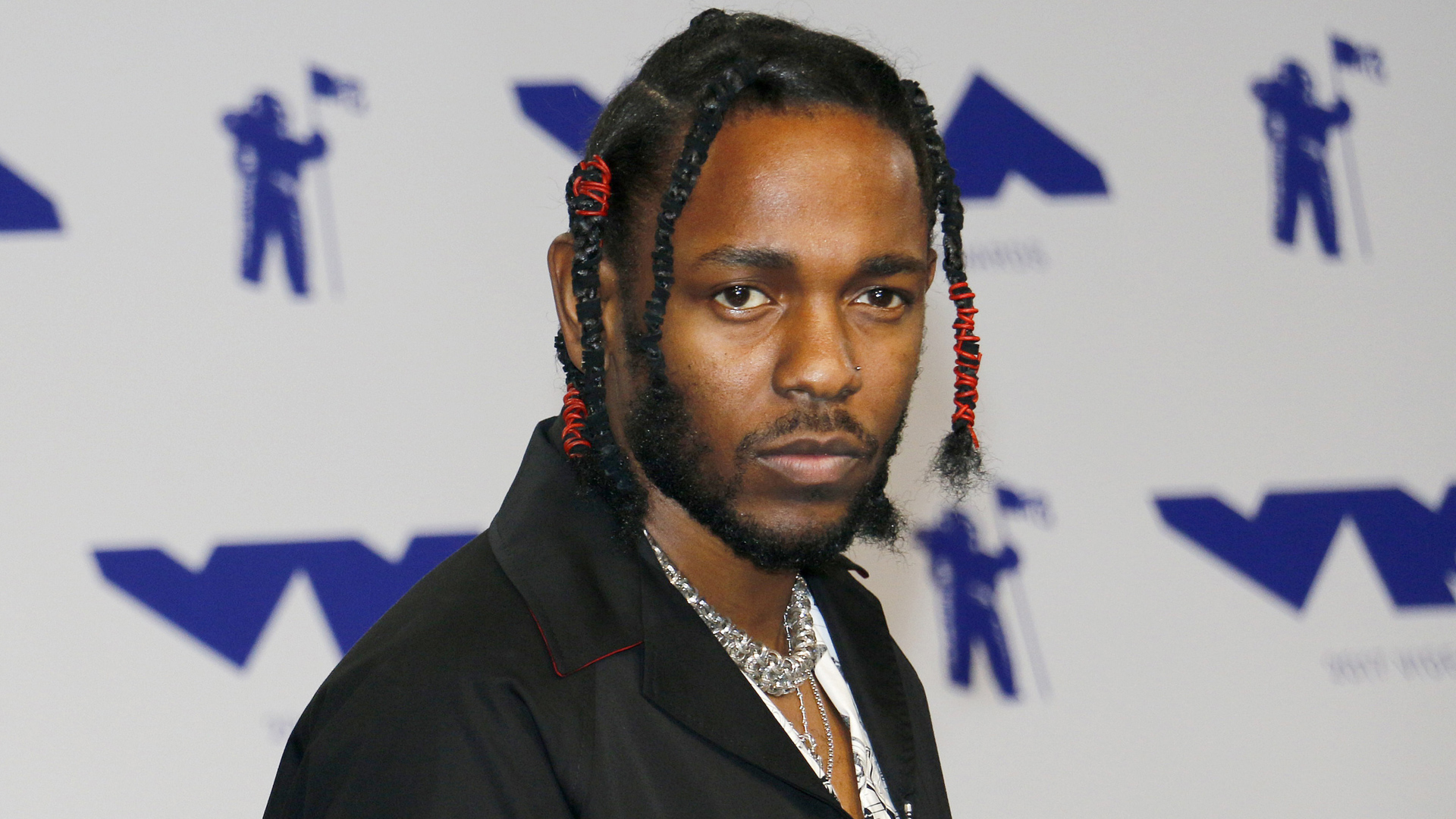 Kendrick Lamar’s fourth studio album “DAMN.” dropped in April 2017, and it had been praised by Billboard as a very likely contender for at least one nomination at the Grammys 2018. Exceptionally well-received, sales of the album reached 2 million copies on July 10, 2017, according to the RIAA.

All 14 tracks from “Damn” garnered spots on the Billboard Hot 100 upon its debut. Those earning the highest initial rankings included “Humble,” “DNA” and “Loyalty,” featuring Rihanna. 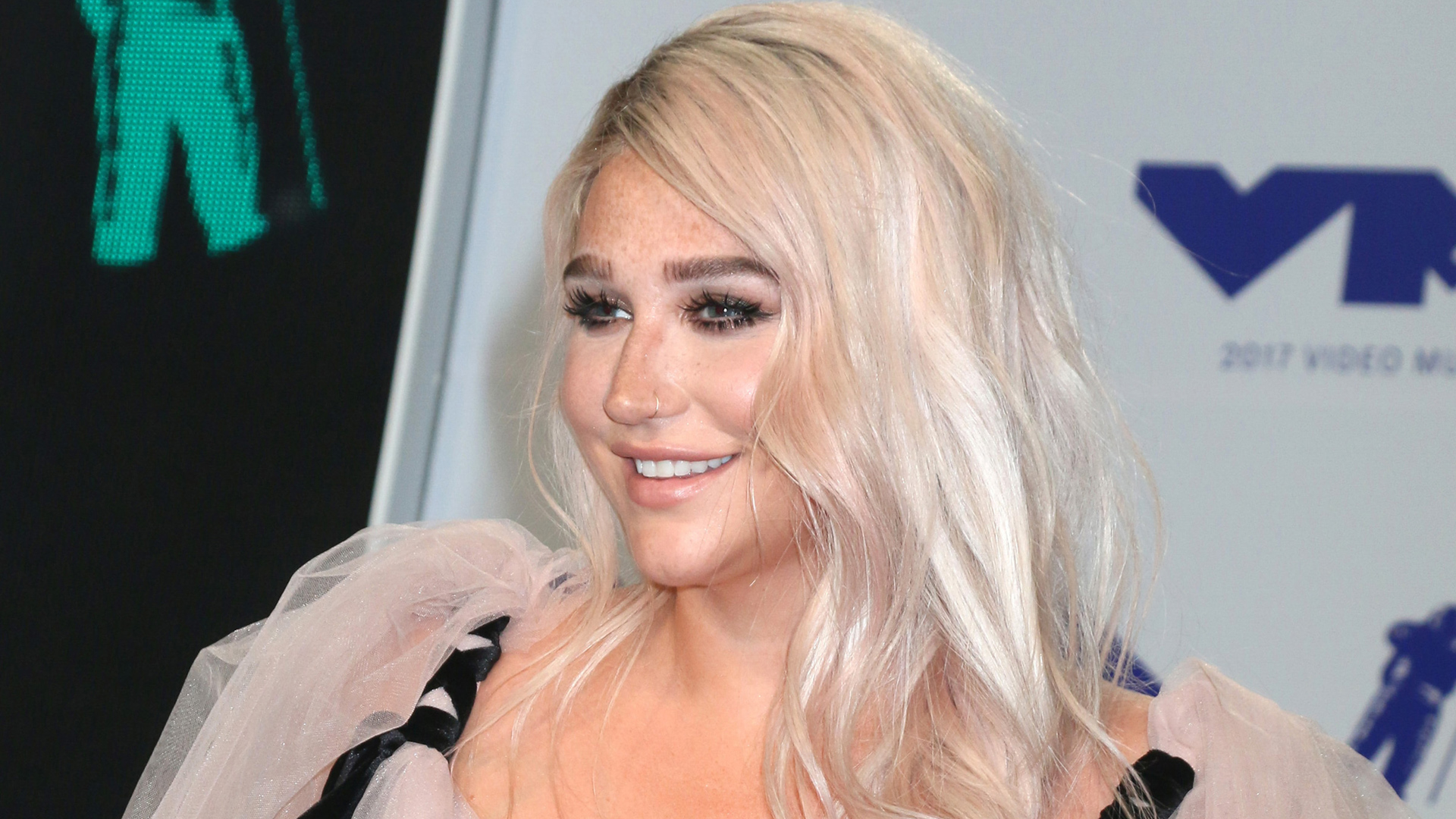 The first full-length album from Kesha since 2012, “Rainbow” debuted in the No. 1 spot on the Billboard Top 100. During its first week, the record sold a total of 116,000 copies, according to Rolling Stone. Along with “Rainbow” itself, the album’s top single “Praying” has landed a nomination in the “Best Pop Solo Performance” category. 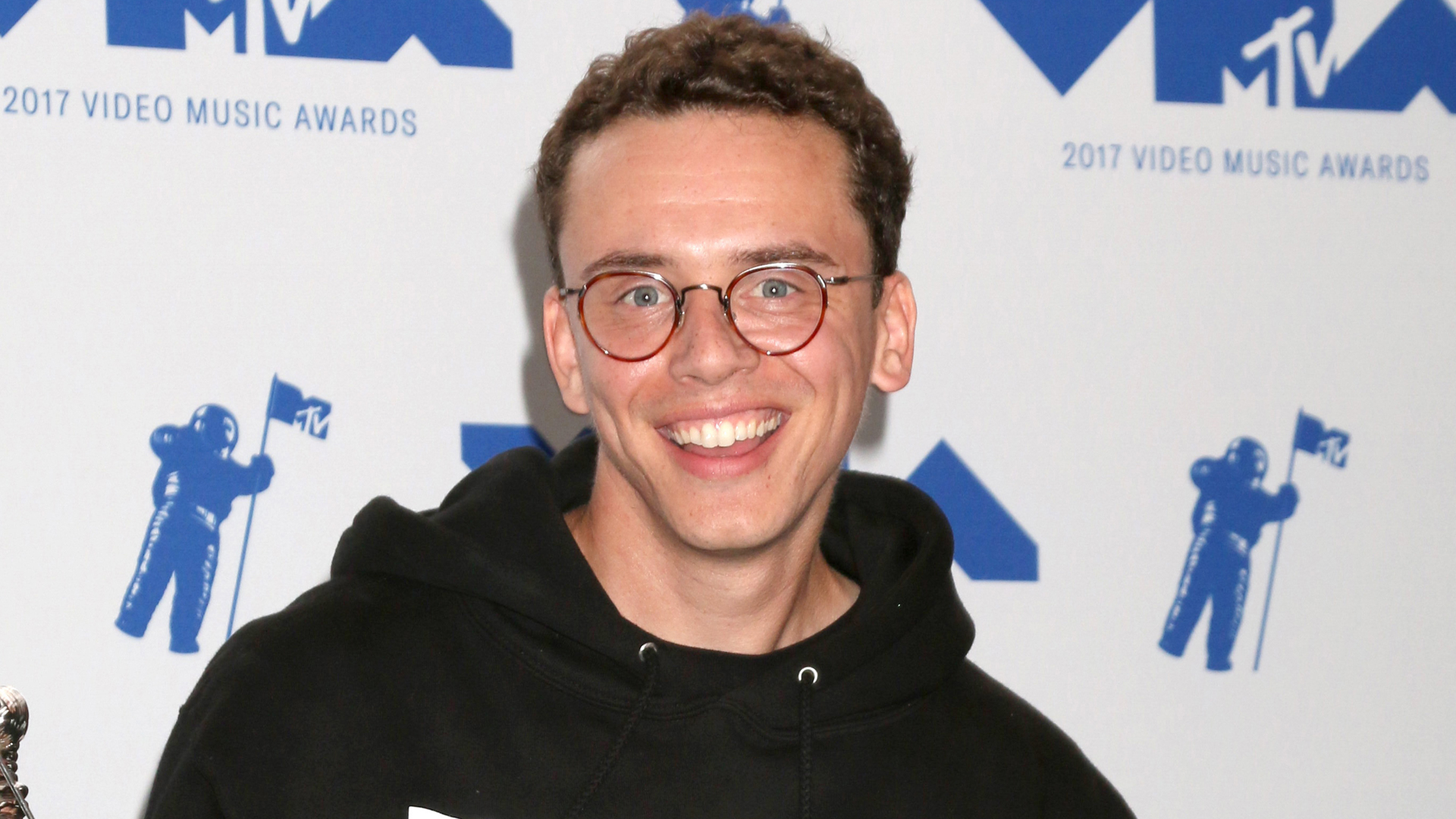 Hailed by Billboard as a possible Best New Artist nominee, Logic’s hit song “1-800-273-8255” has sold 2 million digital copies, according to the RIAA. Released in April 2017, the suicide prevention track is the highest-ranking phone number title in Billboard Hot 100 history.

Otherwise known as Sir Robert Bryson Hall II, the rapper landed his first No. 1 album with “Everybody,” which was released in May 2017. Sales of his wildly successful album reached 500,000 copies in August 2017, according to the RIAA.

Say It Ain’t So: The Weeknd Net Worth vs. Bella Hadid Net Worth: What Went Wrong? 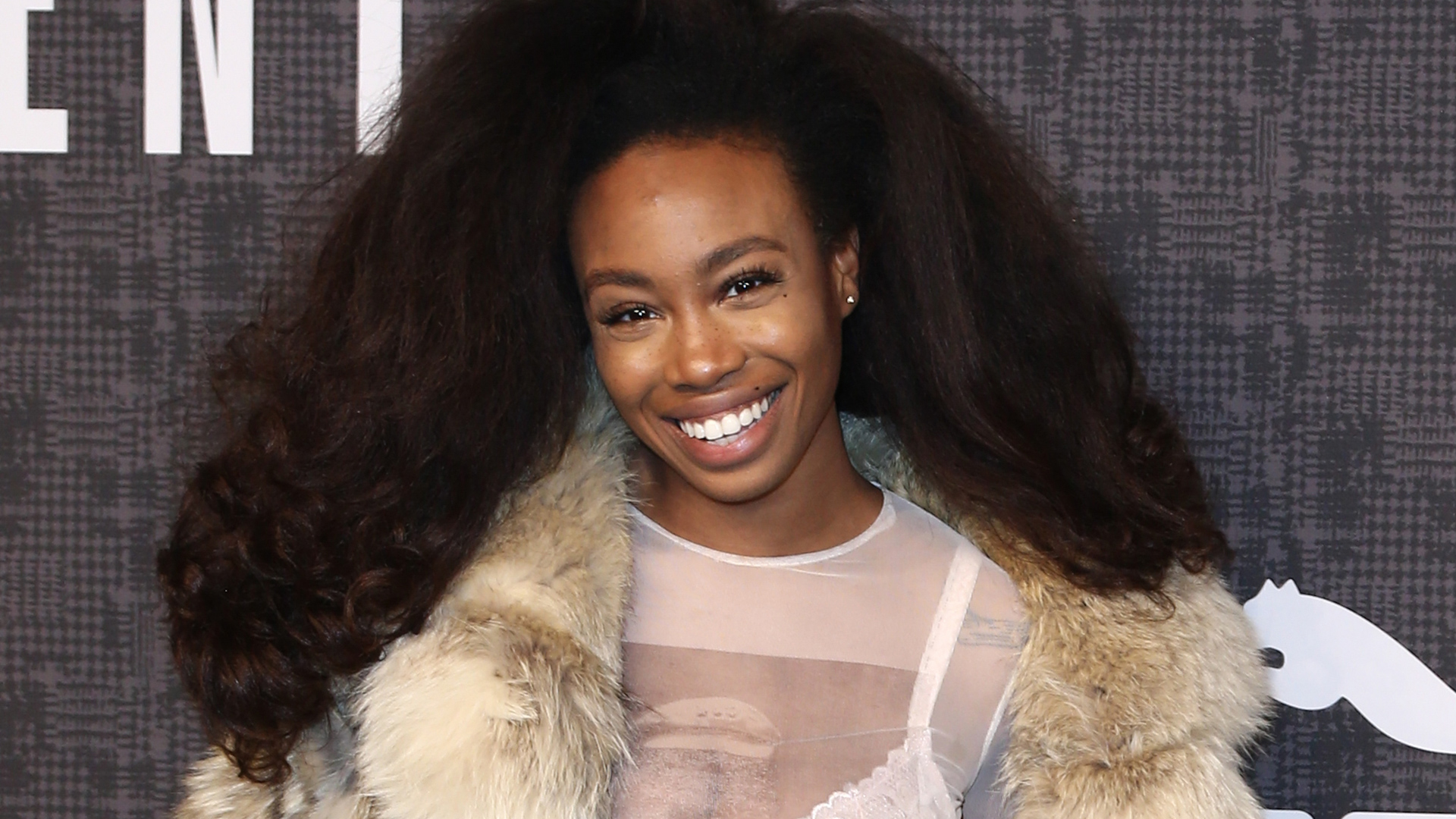 Billboard Grammy predictions forecasted recognition for SZA’s hit album “CTRL” and hugely popular single “Love Galore,” which have sold 500,000 copies and 1 million copies, respectively, according to the RIAA. In a since-deleted tweet, the singer — whose real name is Solana Rowe — announced in October 2016 that she might quit music, but a win at the Grammys 2018 might convince her otherwise. 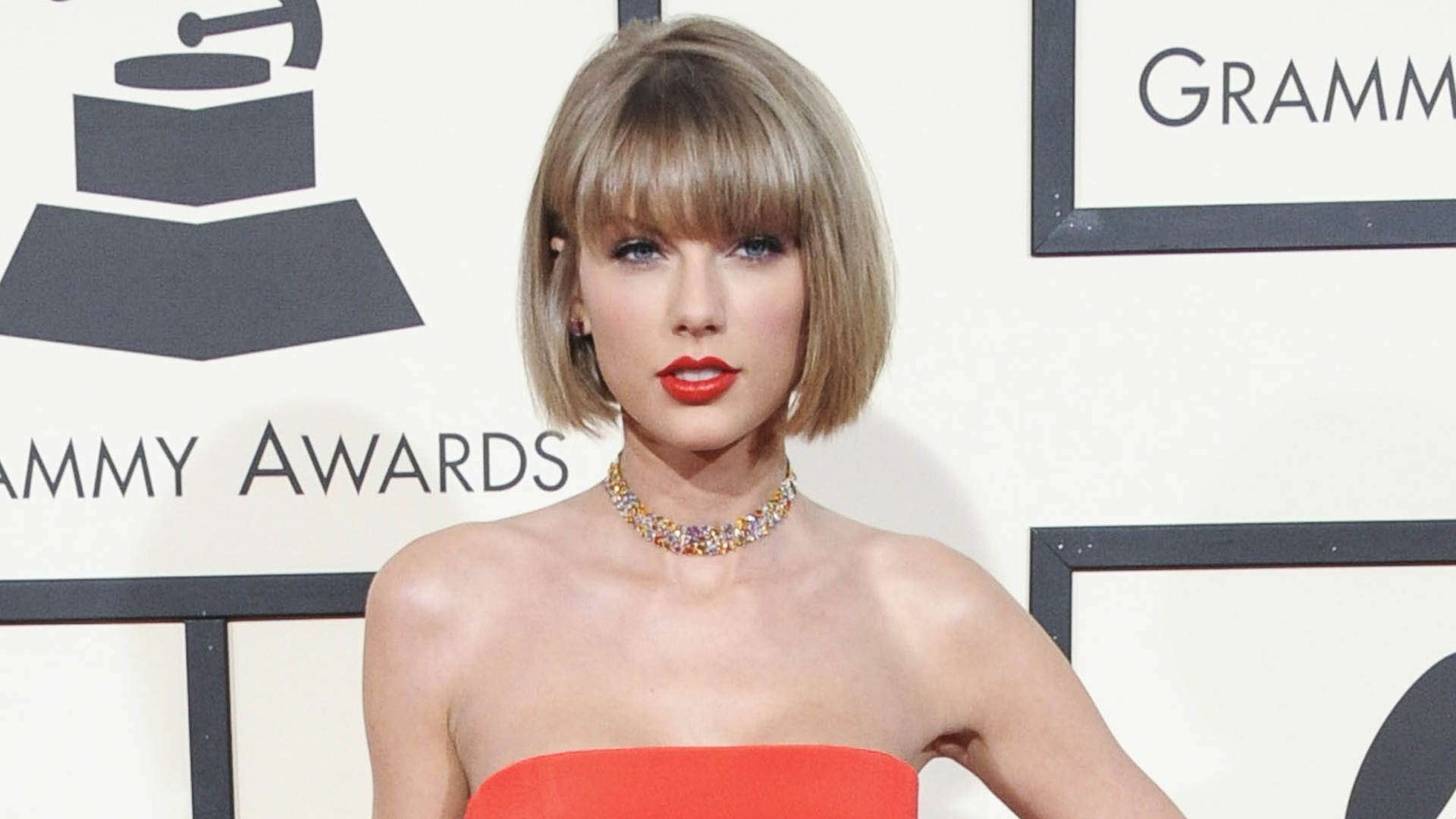 Taylor Swift’s new album “Reputation” wasn’t released until Nov. 10, 2017, so it won’t be eligible for Grammys 2018 consideration. However, her new single “Look What You Made Me Do,” which had just made the cutoff with its Aug. 24, 2017, debut, didn’t land her any Grammy nods. Notably edgier than most of her previous songs, fans were clearly pleased with this new version of Swift, as it sold 1 million digital copies by Sept. 14, 2017, according to the RIAA. Swift also grabbed a songwriter nomination this year for her hand in writing the Little Big Town hit “Better Man,” as well.

Don’t Miss: How Much Will Taylor Swift’s Net Worth Soar With ‘Reputation’? 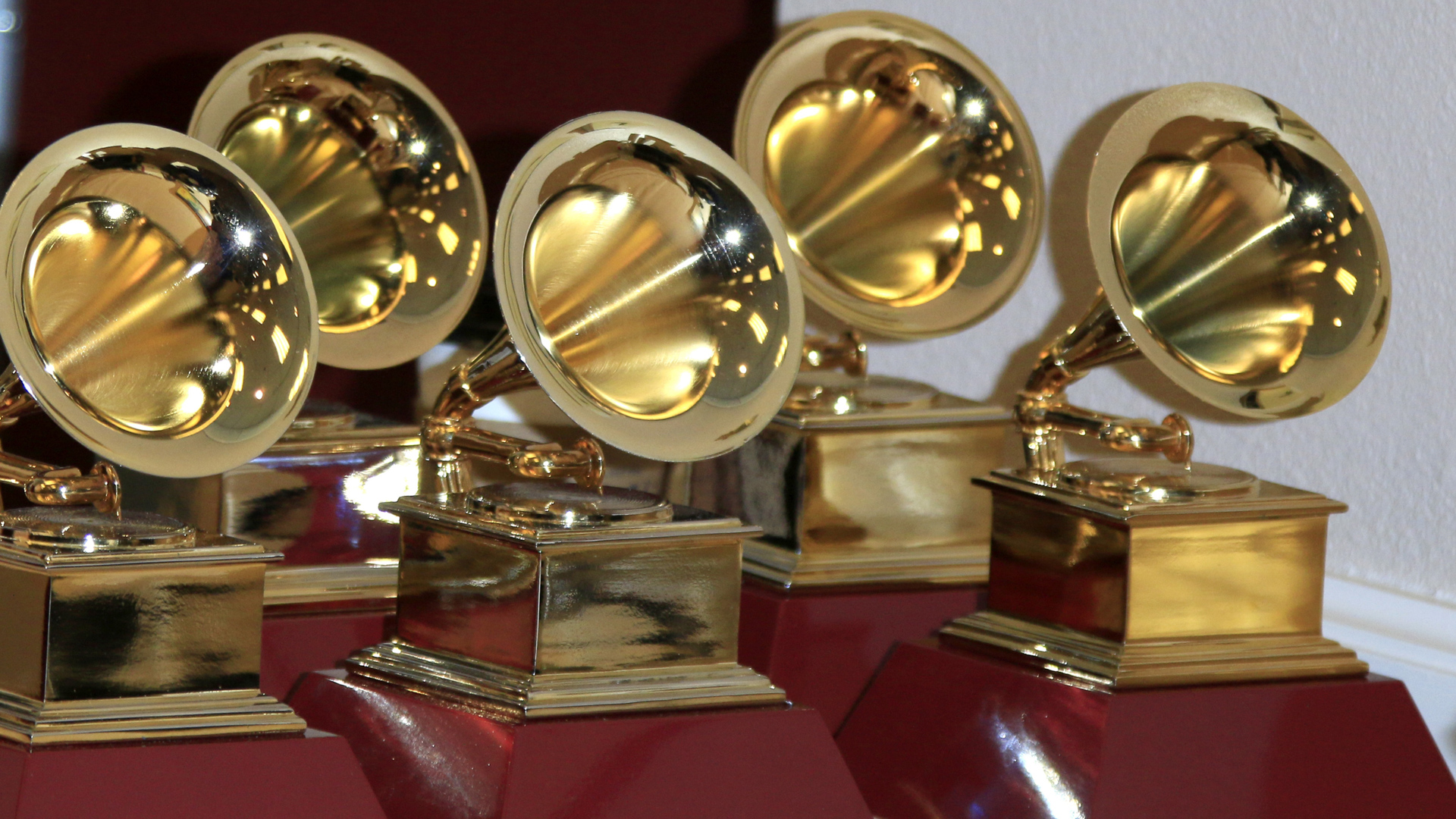 Take a look at the Grammy artists with the deepest pockets. From Bowie to Beyoncé, these artists have all received top honors in the show’s most high-profile categories — and have the bank statement to back it up: 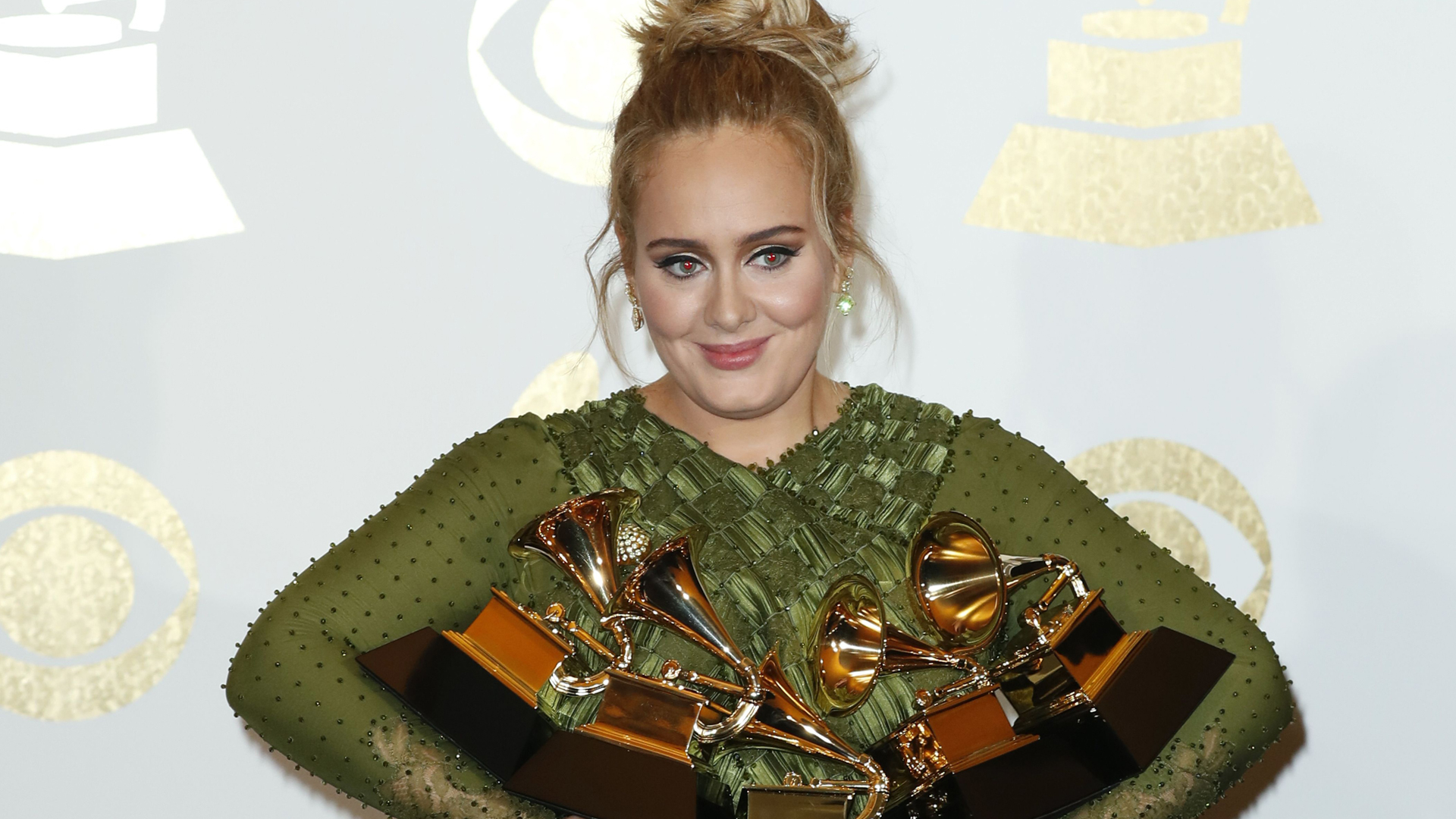 The 2017 Grammys were huge for demure pop songstress Adele. Not only did she take home Record of the Year for “Hello,” she won all five categories for which she was nominated.

Most artists dream of winning the prestigious Record of the Year category once, but this was actually the second time Adele received the honor. She previously won in 2011 for “Rolling in the Deep.” A humble artist, Adele recognized the immense talent she was up against in the Album of the Year category. When accepting the award, she dedicated her win to fellow nominee Beyoncé — and there wasn’t a dry eye in the room. 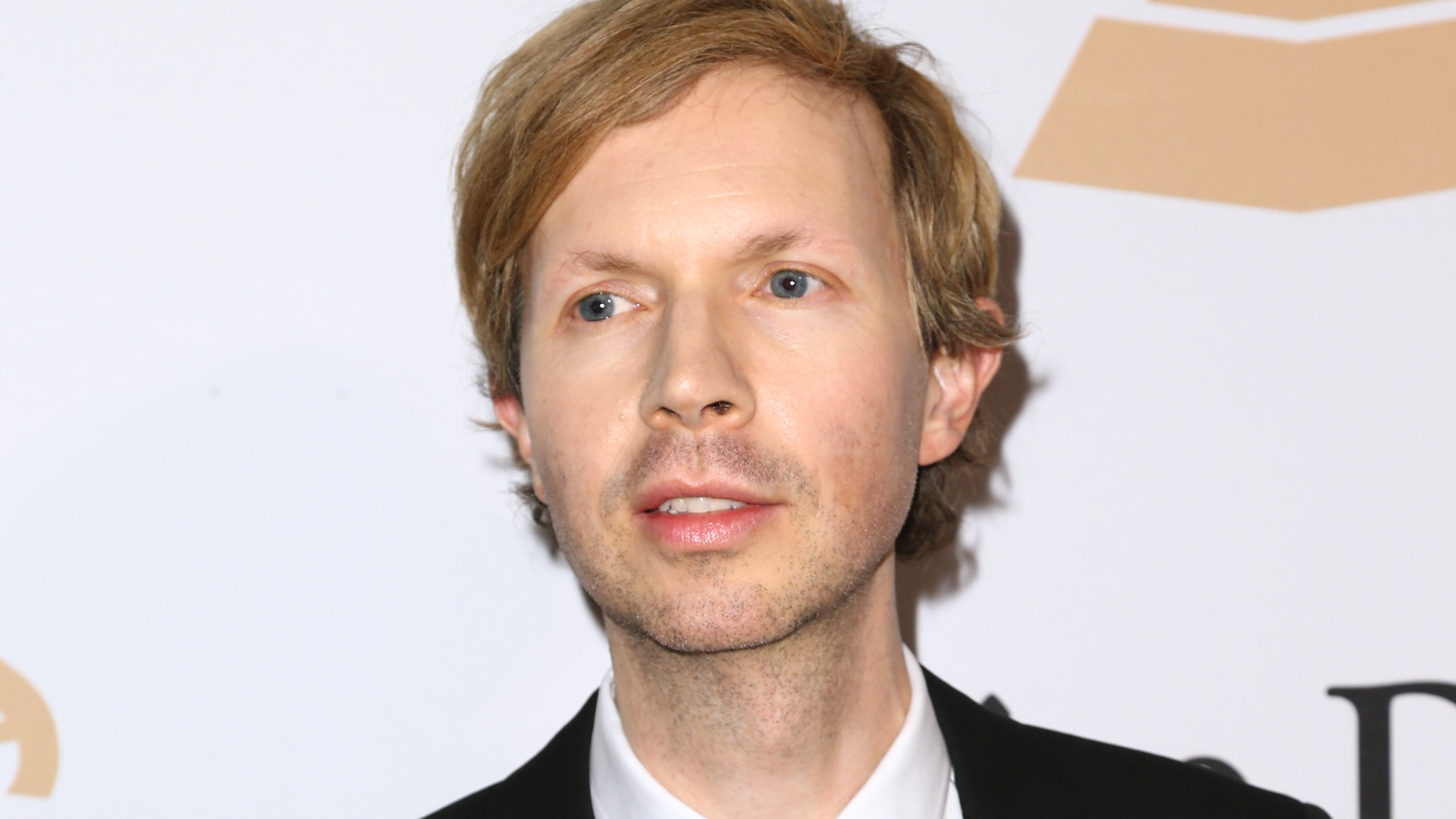 Released in Oct. 2017, the new Beck album “Colors” didn’t make the Grammys 2018 eligibility date, but his song “Dear Life” has been available since August 2017. The song made a brief appearance on the Billboard Hot Rock Songs chart, peaking at No. 22. While it didn’t quite clinch a “Song of the Year” nomination, it did snag a nomination for the “Best Music Video” category. 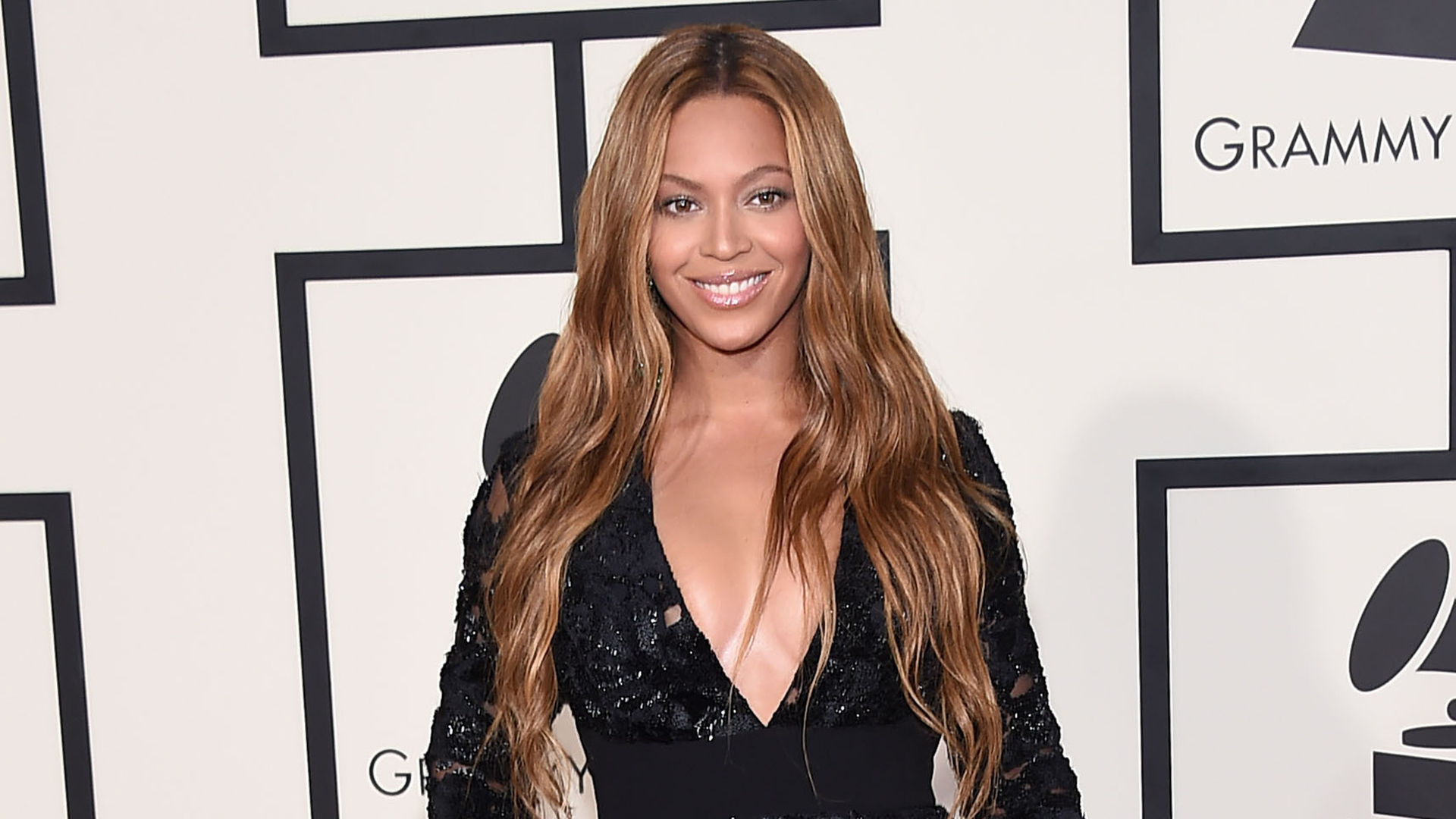 Beyoncé picked up only two wins at the 2017 Grammys — much to the disappointment of the beehive. But, Queen Bey is still on top. Beyoncé’s latest album “Lemonade” has sold more than a million copies, and she’s made hundreds of millions off her fame. Beyoncé’s awards collection includes an impressive 22 Grammy awards. 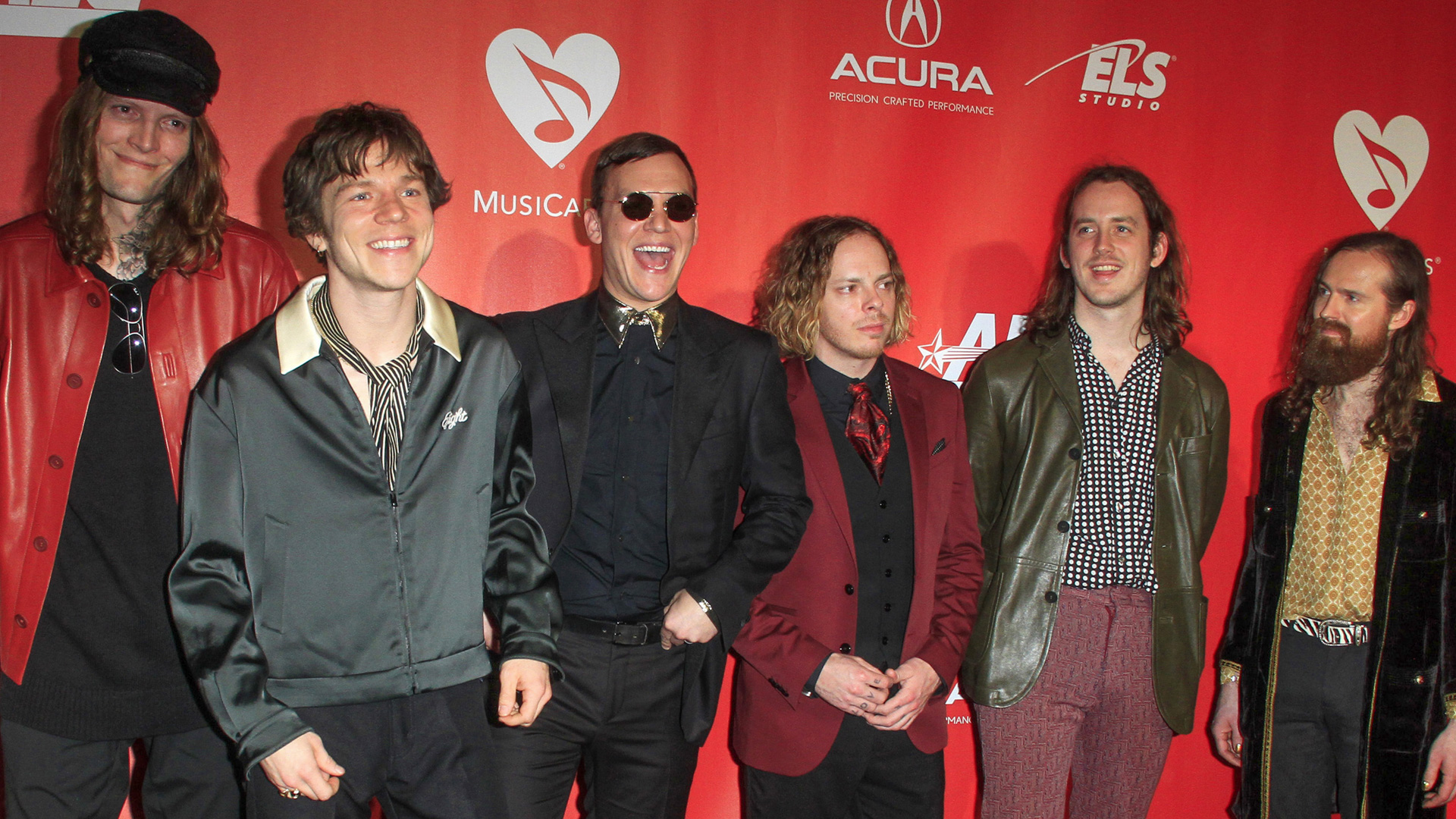 Cage the Elephant Net Worth: $2 Million

Cage the Elephant won its first Grammy in 2017. The group beat out the likes of Blink-182, Panic! At the Disco and Weezer for the accolade. Their biggest hit “Ain’t No Rest for the Weekend,” has sold more than 3 million digital copies. 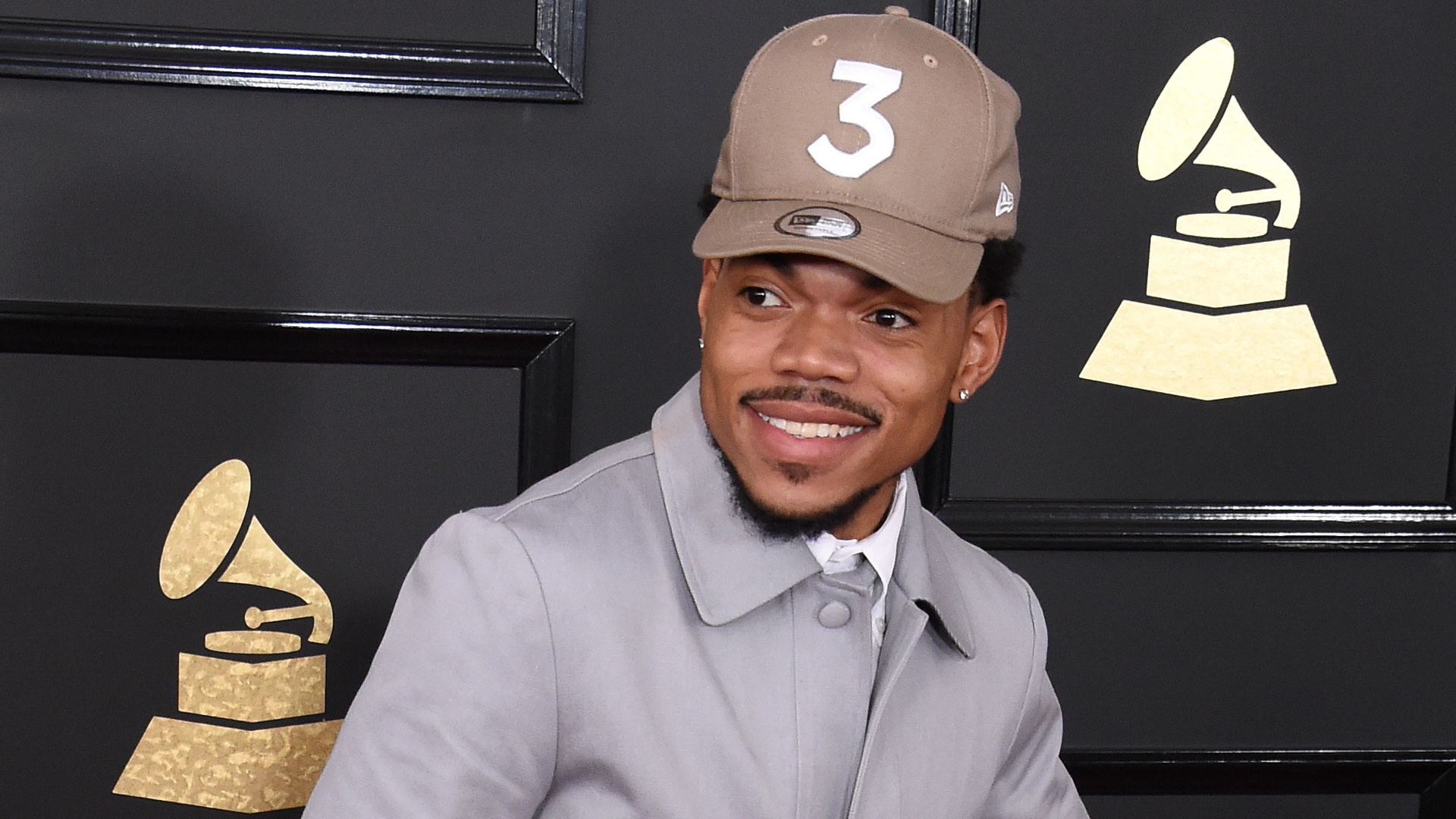 Chance the Rapper Net Worth: $9 Million

Hip-hop artist Chance the Rapper is new to the scene, but he made quite a splash at the 2017 Grammys. In the Best Rap Album category, Chance the Rapper beat out heavy-hitters Drake, DJ Khaled and Kanye West. Legally known as Chancelor Bennett, he also picked up Best Rap Performance for “No Problem,” featuring Lil Wayne and 2 Chainz.

In May 2016, his “Coloring Book” album debuted in the top 10 of the Billboard 200 chart. It was the first streaming-exclusive record to make the list. He was also featured on the Snakehips’ song “All My Friends” — along with Tinashe — which has sold more than 500,000 digital copies. 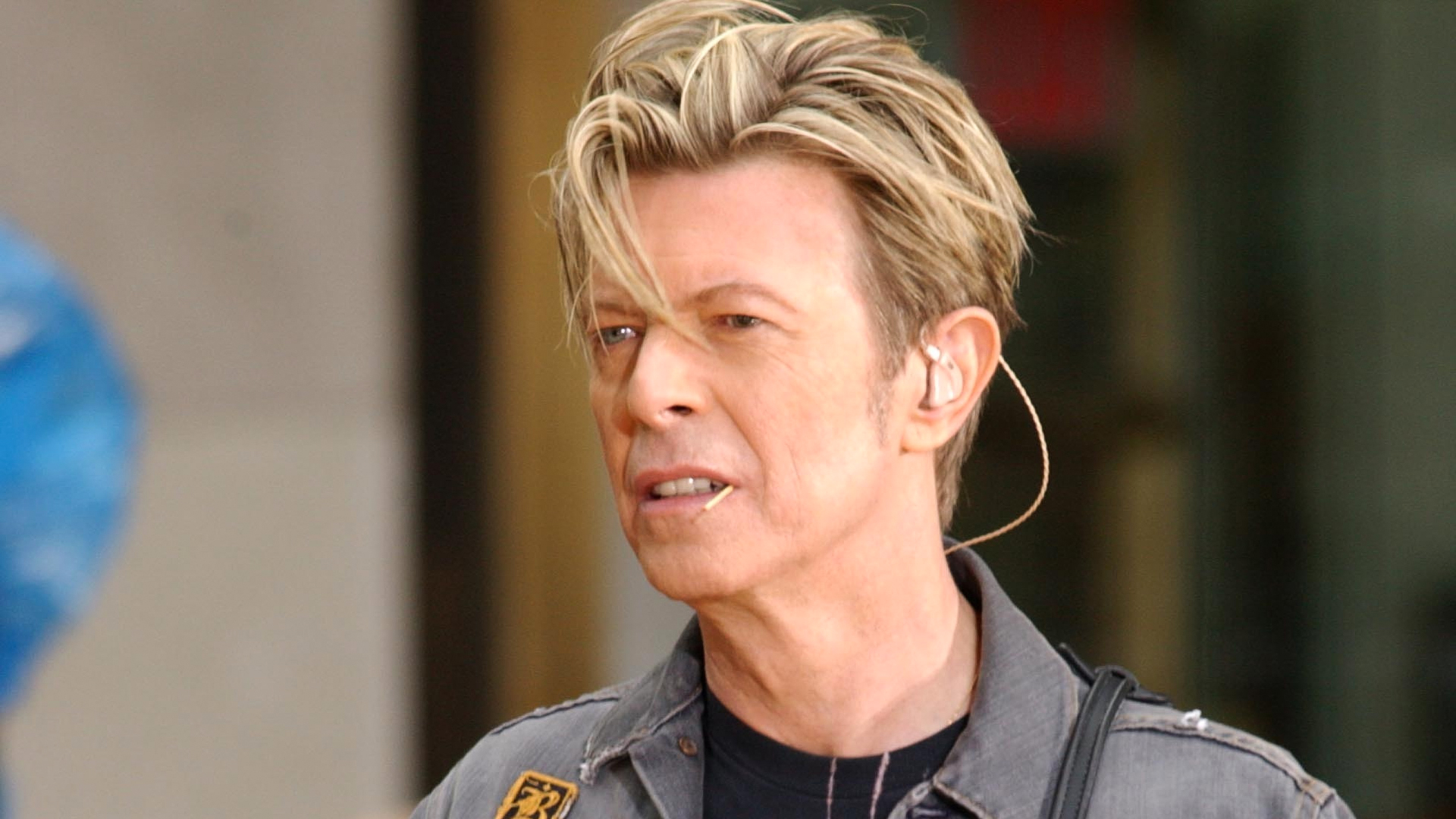 After losing a battle with cancer, David Bowie died in 2016. Bowie enjoyed a 40-year career in the music industry. During this time, he produced 27 studio albums and released more than 100 singles.

In Memoriam: The Wealth and Legacy of the Stars We Lost in 2017 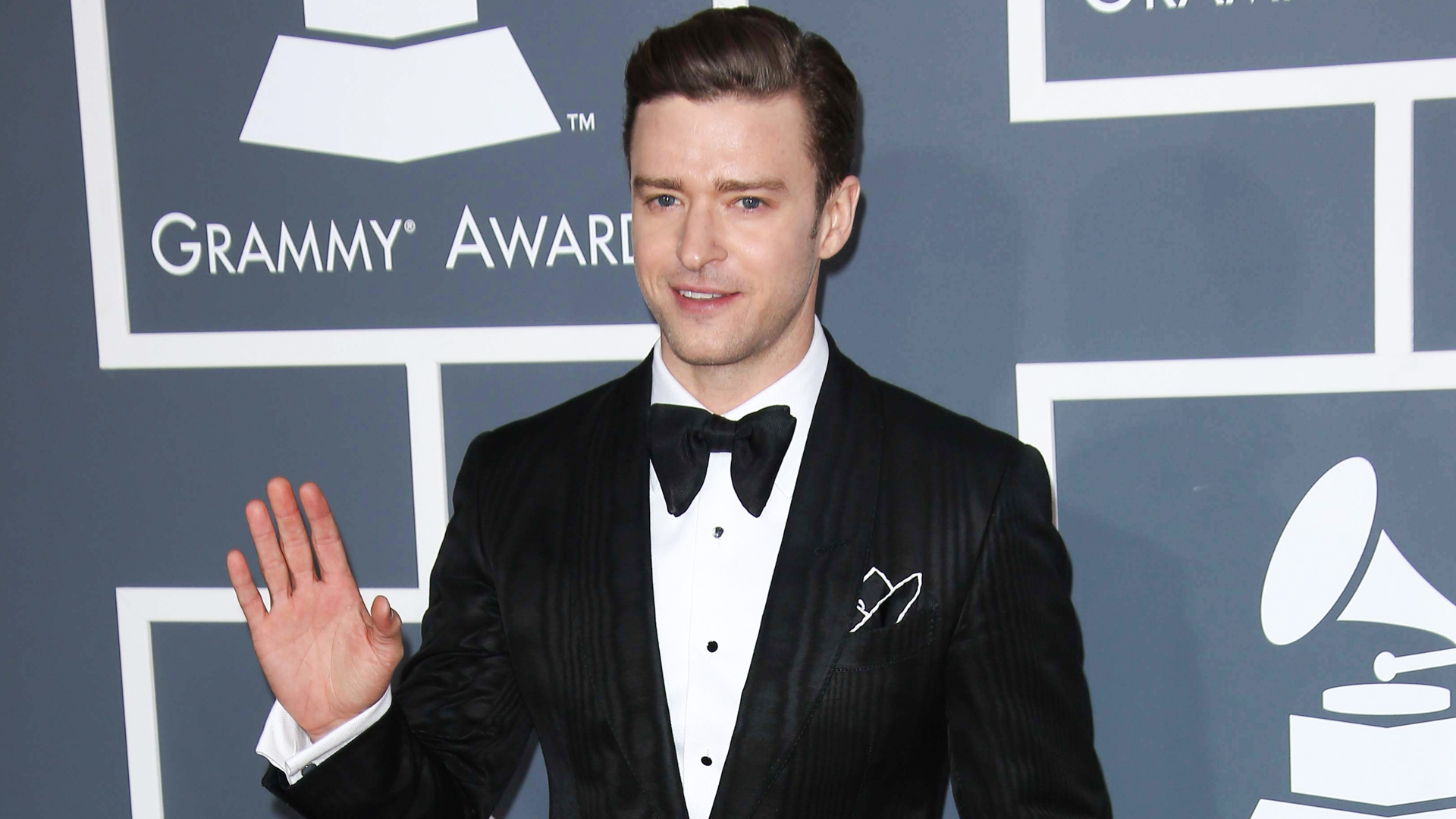 Along with Max Martin and Shellback, Justin Timberlake was honored in 2017 with a Grammy for “Can’t Stop the Feeling!” from the movie “Trolls.” In addition to co-writing the song and singing it, Timberlake starred in the film as the voice of Branch.

This certainly isn’t the first time Timberlake has been among Grammy winners. After this latest win, the former ‘NSYNC member’s Grammy collection includes 10 awards. 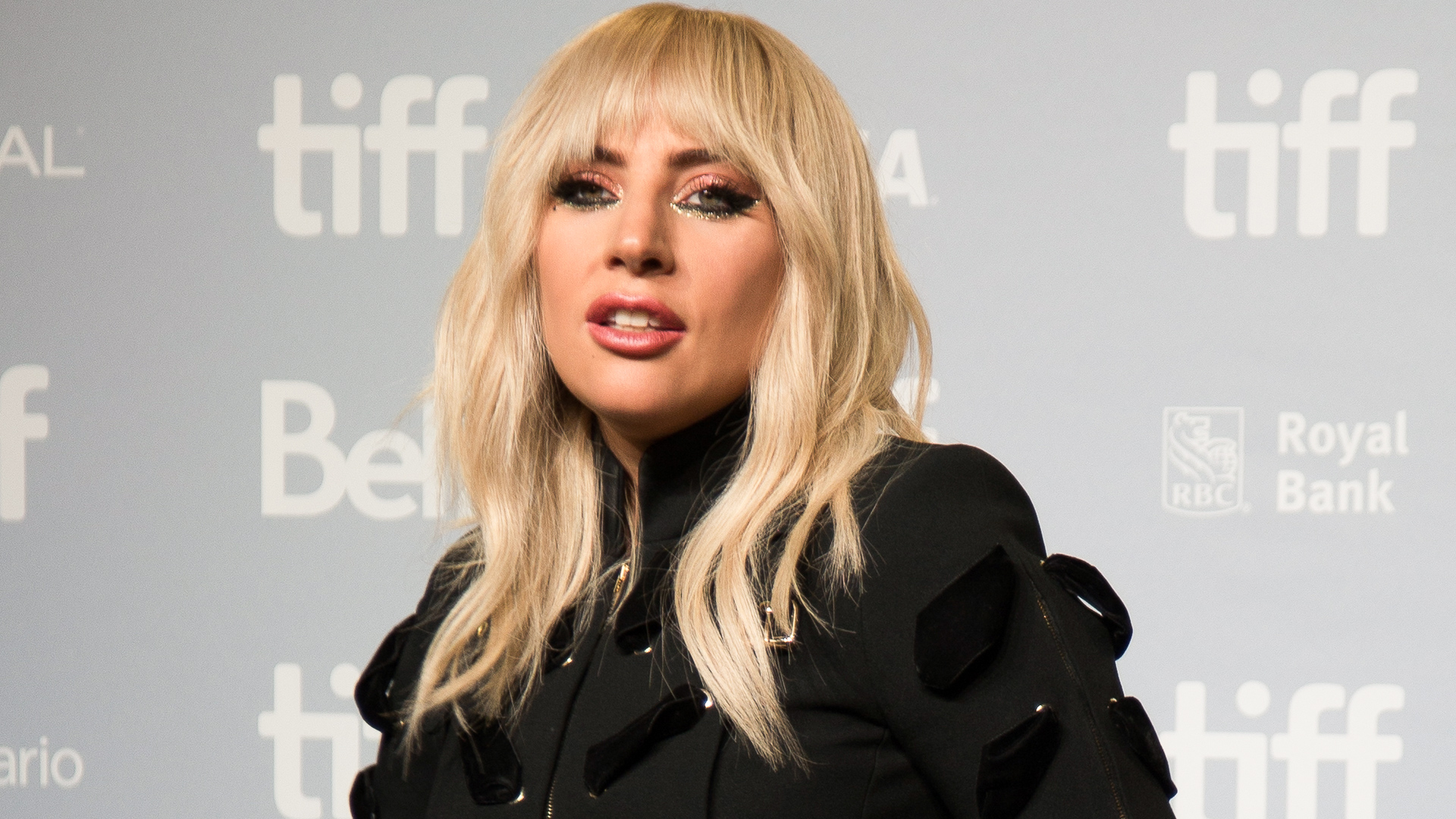 Lady Gaga — whose real name is Stefani Joanne Angelina Germanotta — released her latest album “Joanne” in October 2016. By the pop star’s standards, the album wasn’t a resounding success, but it still sold 1 million copies, according to the RIAA.

Beyond albums, some of Lady Gaga’s latest songs — including “The Cure” and “Million Reasons” — allowed her to achieve her 20th top 40 hit on the Billboard Hot 100 in April 2017. Considering the depth of her talent, it’s no wonder Mother Monster’s a possible nominee for the Grammys 2018. 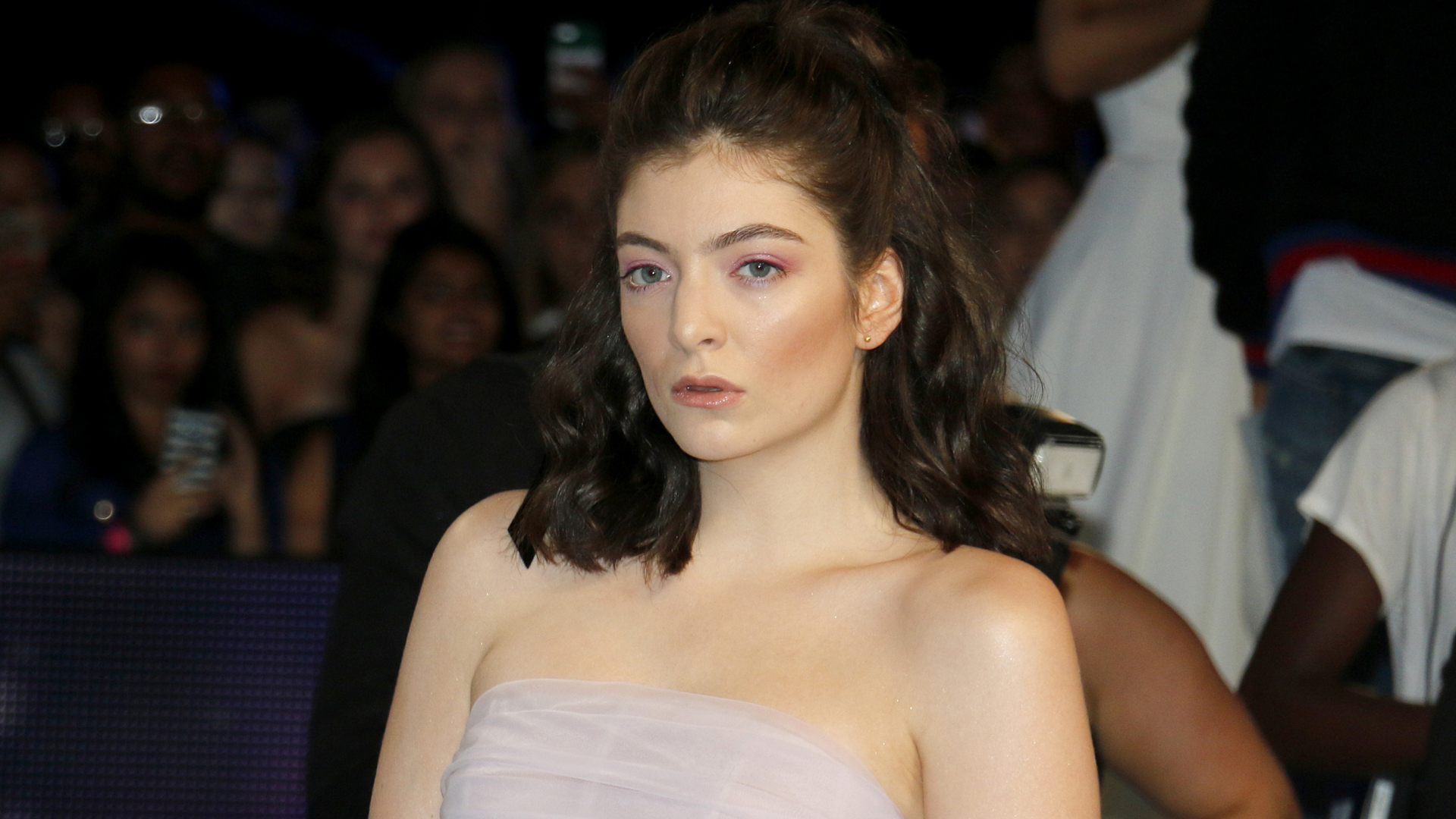 Praised by Forbes as a contender for Album of the Year at the Grammys 2018, Lorde earned her first No. 1 album on the Billboard charts with the June 2017 debut of “Melodrama.” Her second full-length album follows her hit record “Pure Heroine,” which has sold 3 million copies to date, according to the RIAA. 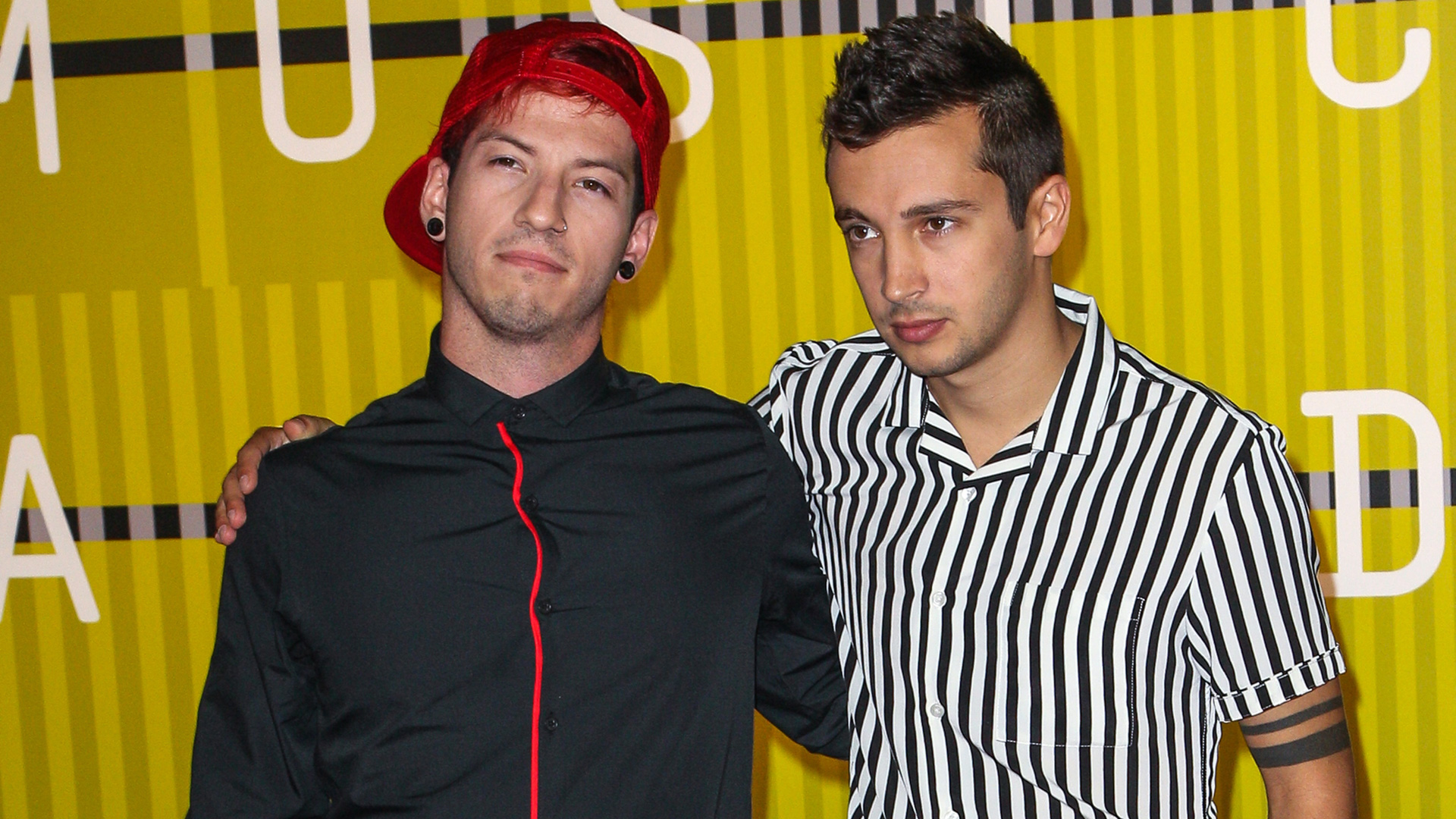 Twenty One Pilots Net Worth: $10 Million Each

First-time Grammy winners, Twenty One Pilots stripped down to their underwear at the 59th Grammy Awards to accept the award for Best Pop Duo/Group Performance. In their speech, the two said that before they were famous, they watched the Grammys in their underwear one year, and vowed to strip if they ever won one. 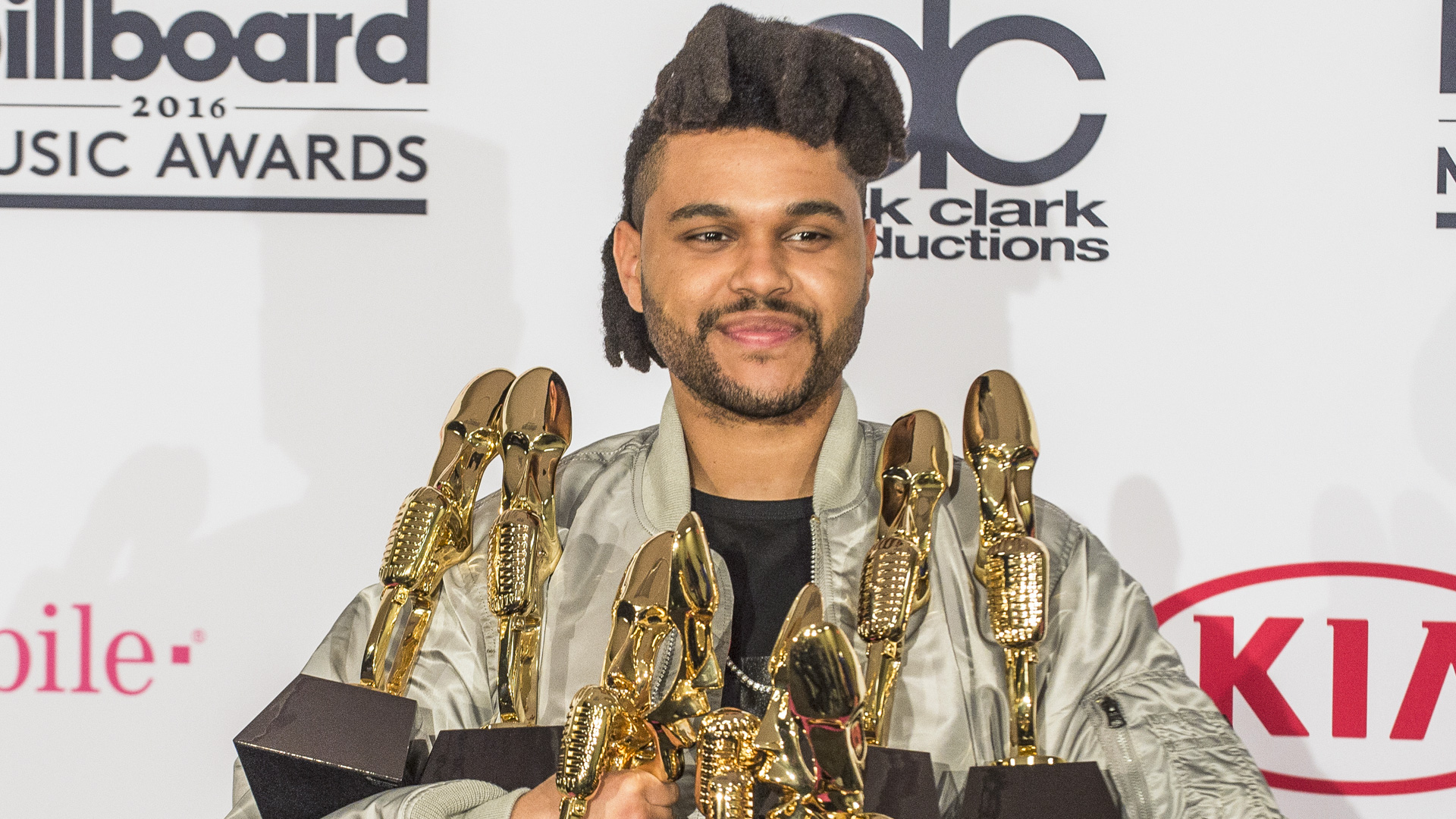 The Weeknd Net Worth: $50 Million

Released in November 2016, the Weeknd’s wildly successful record “Starboy” reached sales of 2 million copies in June 2017, according to the RIAA. The album’s single of the same name has sold 5 million digital copies and spent a record-tying 20 weeks in the No. 1 spot on the Billboard Hot R&B Songs chart.

Formally known as Abel Tesfaye, the Weeknd and Daft Punk performed a mash-up of their hit songs “Starboy” and “I Feel It Coming” at the 2017 Grammys. 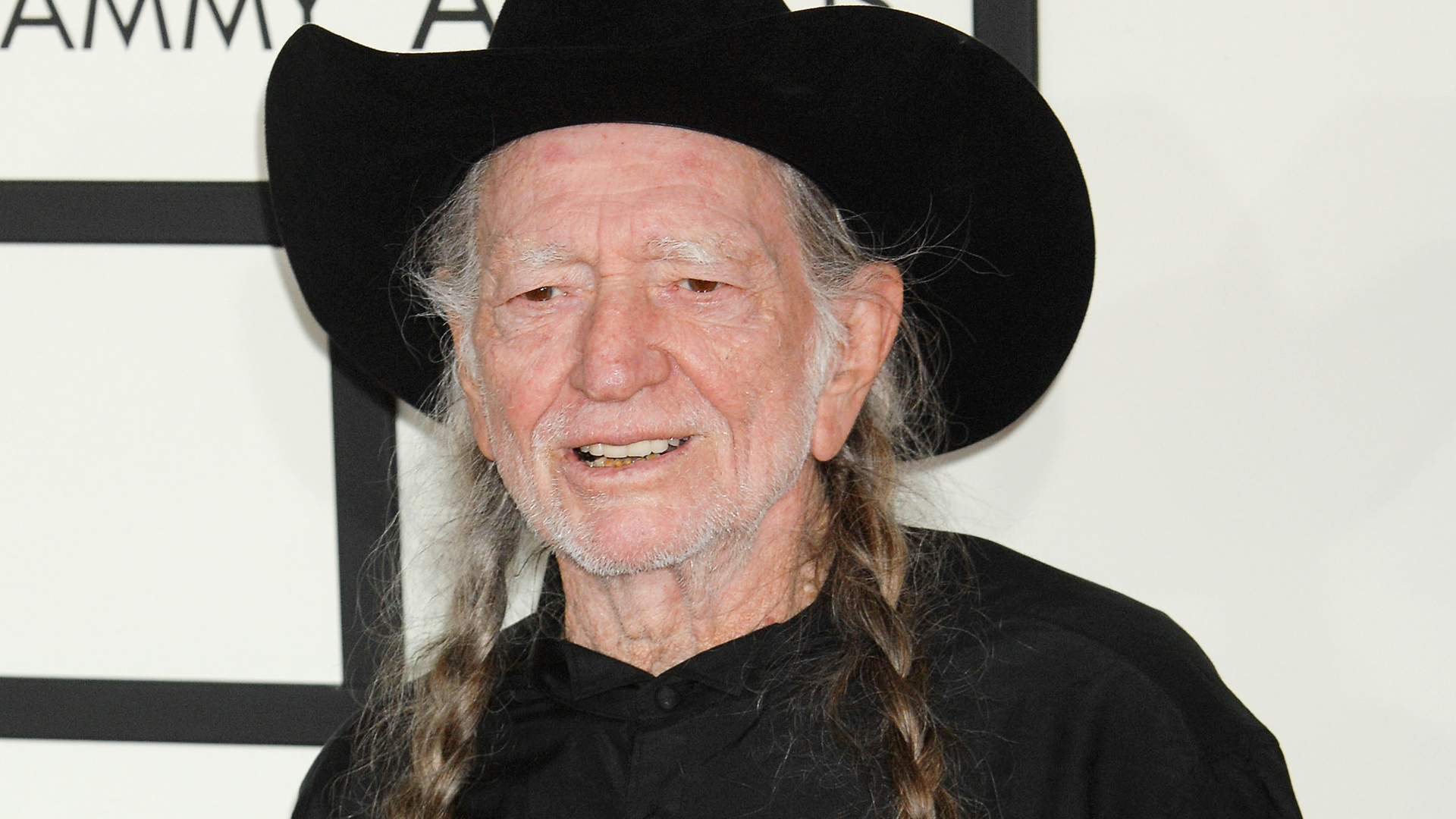 Best known as one of the top country music artists, Nelson has too many Grammy’s to count. In total, the country superstar has released more than 200 albums in his more than six-decade-long career.

Up Next: Grammy Nominees vs. Oscar Nominees — Who’s Richer?

Rachel Holly contributed to the reporting for this article.

All net worths are attributed to CelebrityNetWorth.com.